The Money Cat Knows Where the Money Tree Grows 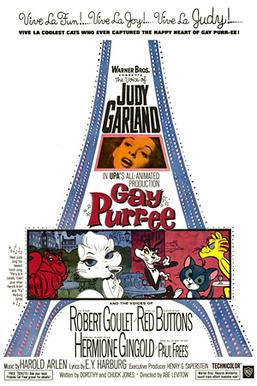 Gay Purr-ee – Apparently Chuck Jones beat Disney to an animated movie about cats in Paris by almost a decade. There was some real star power behind it, too. It was Judy Garland’s only animated role and Robert Goulet’s first movie, and Harold Arlen and Yip Harburg did the songs. This must have been where all of the budget went, because it had very limited animation. The backgrounds were generally well-drawn, but nothing in them moved, and there were scenes with nothing there at all. The film was made by a small company called United Productions of America while Jones was still under copyright to Warner Bros., which led to his being fired. Not that I really understand all the ins and outs, as it was WB who distributed the movie, and Beth informs me they used to play it on the Disney Channel when she was a kid. The plot involves a farm cat named Mewsette (voiced by Garland) who runs off to Paris, and is scammed by a con-cat named Meowrice who wants to sell her as a mail-order bride to an ugly old cat in Pittsburgh.

He also puts her in a blonde wig for no apparent reason.
Goulet voices Jaune-Tom, a champion mouser who has a thing for Mewsette, and has a sidekick called Robespierre.

Apparently the movie has different names in countries where people don’t usually know enough English to be familiar with the earlier meaning of “gay,” but I have to suspect the modern meaning is somewhat appropriate as well. How else would you explain why Robespierre is so eager to get rid of Mewsette so he can spend more time with his male friend?

Also interesting that they named a character after the main figure associated with the Reign of Terror. Anyway, Robespierre eventually relents and accompanies Jaune-Tom to Paris to find Mewsette, only to be shipped off to Alaska by Meowrice. Not enough movies have been willing to speak out about the dangers of overseas feline trafficking. Meowrice’s plot kind of falls apart on its own, as he screws an associate out of payment in a way she finds out pretty much immediately, and tells Mewsette his plan before sending her off. There’s a bit of odd pacing when we’re shown paintings of Mewsette in the style of different artists, some of whom were dead or didn’t live in Paris yet at the time the movie takes place. It’s clever, but pretty much stops the film dead for a while. I’m always interested in how media where animals act human portray their society. Here, cats can apparently make and spend money, and they have their own businesses and nightclubs in Paris, yet Mewsette still had a human owner. It’s also worth noting that the mice Jaune-Tom catches remain alive, which might have been intended to be less disturbing, but seems more so to me. Then again, we’re talking about cats, which will often toy with their prey rather than killing it outright. Overall, it’s a kind of bizarre movie that, while not terrible, fails to congeal as a whole despite many elements that you’d think would have made it successful.