No Shirt, No Shoes, No Salvation

The Simpsons has been renewed through the thirtieth season. And to think I remember all the rumors that it would end after the tenth. I’m sure I’ll still watch it as long as it’s on, assuming I live that long. The most recent episode, “The Nightmare After Krustmas,” has Krusty the Clown almost converting to Christianity, only to be talked out of it by a hallucination of his late father, Rabbi Hyman Krustofsky. It marks the return of Krusty’s daughter Sophie, voiced by Drew Barrymore in her first appearance, but this time by Natasha Lyonne. Another returning character was the Parson, whose hip, laid-back attitude (apparently based on Bing Crosby) provides a contrast to the more boring and jaded Reverend Lovejoy. 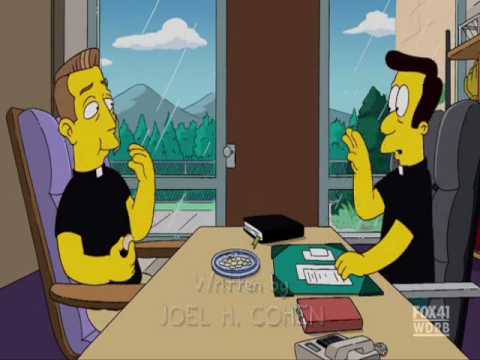 The Parson’s higher-ups, the Patriarch and Metropolitan, are ranks not used in most Protestant denominations, but the writers have a certain amount of freedom when it comes to the details of the Presbylutheran faith. I tend to like religiously-themed episodes of the show. There are devout Christians who love the show, presumably largely because, unlike many sitcom families, the Simpsons attend church regularly. When God shows up, traditionally with his head not seen and five fingers on each hand, he’s a pretty nice guy. But then, the show can be quite irreverent when it comes to religion, too. One episode, “Pray Anything,”
ended with God hanging out on a cloud with Buddha and Colonel Sanders.

When Homer is raptured in “Thank God It’s Doomsday,” Jesus is seen as still sad about what happened to him on Earth.

Krusty’s vision of Jewish Heaven in “Clown in the Dumps” places Jesus and Rodney Dangerfield in the VIP section. 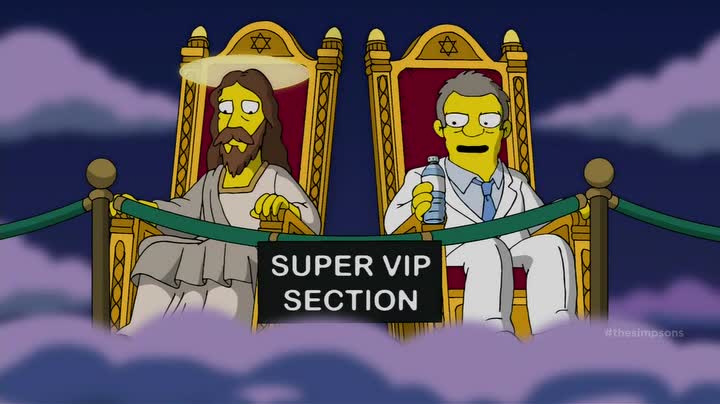 And this one gave us a discussion between separate Christian and Jewish Gods, while Ahura Mazda stumbled around drunk. Many of the show’s writers are Jewish, but they don’t seem to be a particularly religious group. In the commentary for “Simpsons Bible Stories,” someone mentioned how some Christian animators had a problem with the brief segment of Jesus suing a chariot company, but didn’t seem to mind the Old Testament being treated in a similarly flippant way. Although he had a rabbi father, Krusty is a non-practicing Jew, as seen when he orders the least kosher sandwich possible. It’s quite common for people to identify as ethnically and/or culturally Jewish even when they don’t follow the Torah. I’m sure part of it had to do with gentiles treating Jews as an ethnic group. If someone has antisemitic attitudes, I doubt they’ll cut someone a break because they eat pork. Does this kind of thing exist for other religions? I’m sure it does to some extent, as religion is tightly intertwined with culture, even for non-believers. I remember Christopher Hitchens saying it was a common joke to ask if someone was a Catholic or a Protestant atheist, which doesn’t make a lot of sense on the face of it, but I’m sure there are differences in their attitudes. I’ve seen the argument that cultural Catholicism could be considered a thing, as a Catholic upbringing and lifestyle are pretty distinct even if someone doesn’t actually believe in it. And while Catholics aren’t considered an ethnic group, certain ethnicities are closely identified with Catholicism. Protestantism, with its emphasis on faith, doesn’t really work that way, although certain aspects of it are still likely to seep into a person’s perspective.