I think I’ve played enough of the 3DS version of Dragon Quest VII: Fragments of the Forgotten Past to get the gist of it, so here’s a preliminary review. I played the PlayStation release of this (called Dragon Warrior VII) some years ago, but never finished it. The game begins on an island that appears to be the only land in the world. Later, you find out that there used to be more land, but it was destroyed in the epic battle between God and the Demon Lord Orgodemir.

The player’s initial goal is to go back in time to when the other lands still existed, and do what you can to help them, usually including fighting a boss monster. Then the place will reappear in the present. Time travel is achieved by finding pieces of tablets, which you can assemble at a ruined temple. The adventure begins with three characters in the party: the hero, his trouble-making best friend Prince Kiefer, and the mayor’s rather bossy daughter Maribel Mayde. 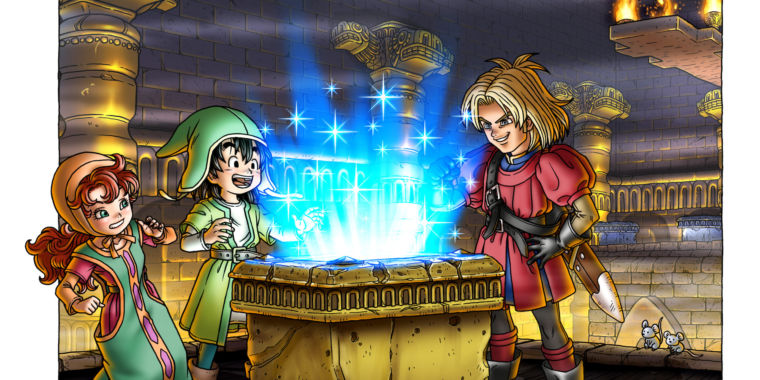 You can eventually recruit other characters, and one your initial ones leaves permanently. It’s not until after that that you can access the job system, which I remember being well-implemented. For the time being, Kiefer is a strong fighter and Maribel a magic-user, fairly typical of already-created male and female characters in these games. That’s not always the case, though, as seen with Tsarevna Alena in DQ4. The ongoing plot of restoring countries makes it quite episodic for a DQ game, much like DQ9 in that respect. It also moves a bit slowly, making you complete some largely pointless quests before even fighting any monsters. The present is mostly free from monsters, although some still dwell in caves and such. As for how it’s changed since the earlier version, for one thing, the monsters are now visible on the map screen as in DQ9, rather than just appearing randomly. Okay, there’s still some degree of randomness to it, but you can choose to enter or avoid battles. The battles are still turn-based, but the attacks are animated. While the game was always pretty straightforward, this remake holds your hand even more by having your fellow party members and a weird fairy creature at the Shrine of Mysteries provide hints when you need them, plus a device to tell when tablet fragments are nearby.

As with other more recent translations of the series, inhabitants of different places speak in different dialects, there are a lot of puns, and names are sometimes changed accordingly.

And since it’s for 3DS, there’s 3D rendering for the characters and some of the objects, although movement still takes place in two dimensions. The DQ series is one that keeps the same basic structure from one game to another, but finds ways to tweak the formula. I don’t know if I’d recommend this one as an introduction to the series; it kind of assumes some familiarity with the gameplay style, but it’s largely self-explanatory anyway, especially if you’ve played another turn-based RPGs.

1 Response to Fullheal the World