It’s a Jolly Holiday with Mary

Beth and I spent much of New Year’s Eve watching Mary Poppins, which neither of us had seen in some time, and I’m making a point of rewatching (or in some cases watching for the first time) the Disney animated and partially animated movies. 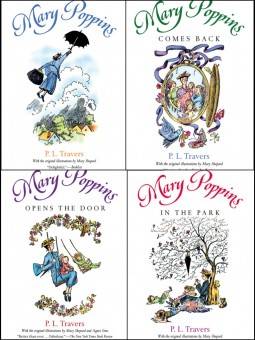 I read the first four Mary Poppins books recently, and there’s an incident in one of them where the children meet live toys and nursery rhyme characters between the first and final stroke of midnight at New Year’s. The books are very episodic and kind of blend together. P.L. Travers (born Helen Goff) had a fascination with world mythology, and there’s a very mythic quality to the character of Mary Poppins. She’s kind of a deity in her own right, stern and quick to anger but inspiring love and devotion, granting magical boons but making sure no one gets too complacent with them, and coming and going as she pleases. She also has relatives and acquaintances who have magical abilities and mystical qualities. At one point in the first book, she and the children go Christmas shopping with one of the Pleiades. Mary will flat-out deny the magical adventures after they happen, but the kids retain some kind of proof that they were real. She’s a contrary character in other ways as well, like how she pretends to have no regard for birds, yet we later learn that some of her best friends are birds, and she’s appalled with the idea of keeping a lark in a cage. 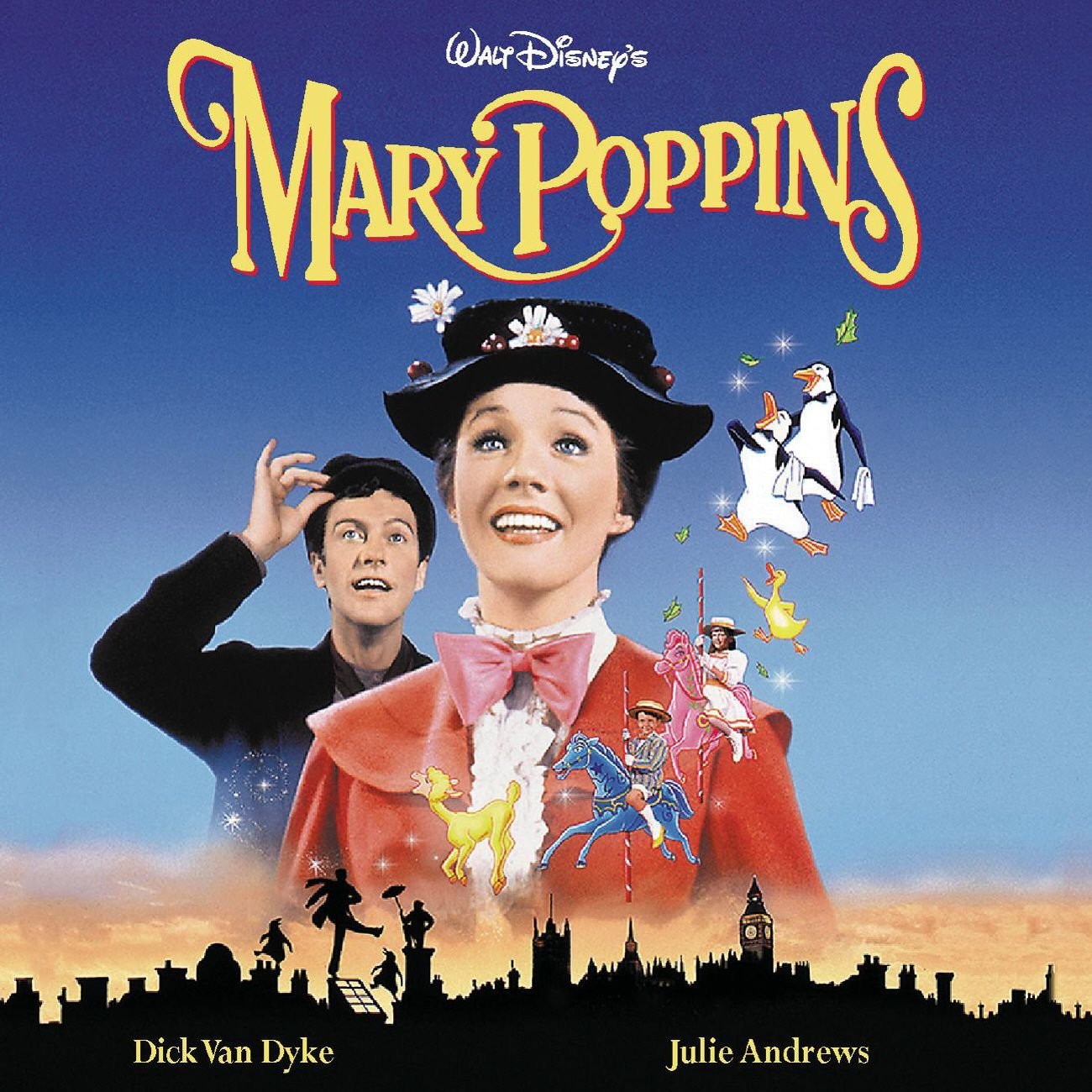 The Disney movie is a classic, very well-made and with enjoyable songs, but it’s very long and drags in some places. I kind of wonder that modern filmmakers thought kids would have trouble sitting through the Harry Potter movies when there were films like this one back in the sixties. While largely retaining the episodic nature of the books, Disney at least tried to add in an overarching story involving Mr. Banks being cold to his children and not spending time with them. The Mr. Banks of the book, whom the author is said to have based on her father Travers Goff, also seems to have quite a bit of Peter Pan‘s Mr. Darling in him: always making a show of being proper and in control, but quite childish when under stress. I have to suspect making him a meaner character was a commentary by the American filmmakers on the stereotypes of British fathers. In the movie, George Banks’s character arc comes to a head when Mary convinces him to take the children to the bank with him, then secretly encourages them to spend their money feeding the birds in a nearby cathedral. George and the bank directors encourage the kids to invest their money (doesn’t it seem more likely that George would have already opened savings accounts for his children?), and a misunderstanding leads to their running away, a run on the bank, and George being fired. He decides to spend more time with his family, but then Mr. Dawes Jr. rehires him as a partner, so wouldn’t that mean he’d have to concentrate on work even more than before? Mrs. Banks is also absent much of the time, being involved with the women’s suffrage movement. While obviously an important cause, she often seems to treat it as a hobby. It’s kind of appropriate even today, considering what I heard about some people treating the Standing Rock protest like a vacation. The connection to the movement is likely why the film was specifically set in 1910 even though the books were set around when they were written in the 1930s, when British women already had the vote. Travers herself apparently thought Julie Andrews’ portrayal of the titular character removed a lot of her harshness, but she’s still pretty mean and strict in the film, and retains the frustrating habit of denying that any of their adventures ever took place. I think the main difference in Andrews’ Poppins from the original is that she seems more aristocratic, while Travers’ character had more of a lower-class attitude and manner of speaking. The movie also downplays here extreme vanity, although some hints of it remain. Written out are Jane and Michael’s baby siblings and the lazy but lovable odd-job man Robertson Ay. The neighbor Admiral Boom remains, but his wife never appears, and he’s obtained the habit of firing off a cannon every day. 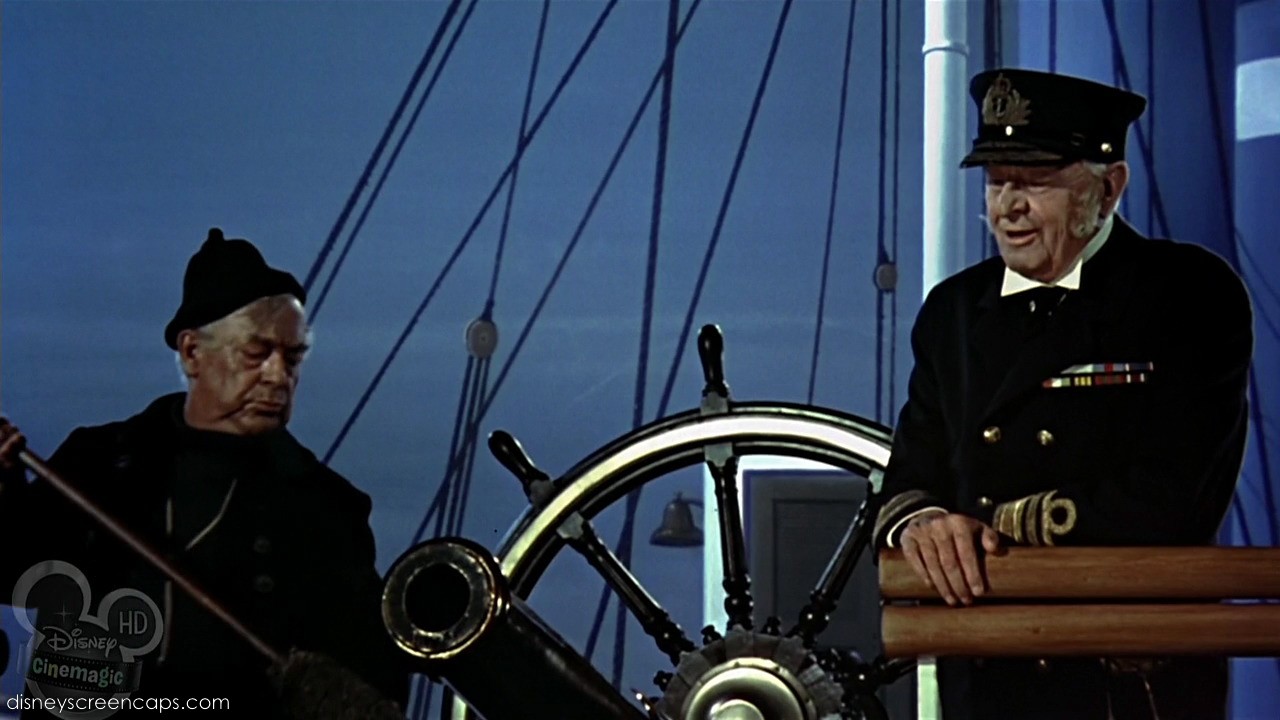 I’m not sure why the authorities are okay with this, but it’s a running gag that again plays on the idea of the English as no-nonsense people; the Banks household stops everything to brace for a cannon blast, then calmly goes back to whatever they were doing before. Bert’s role is expanded quite a bit, with his character originally being a match seller and sidewalk artist who goes on outings with Mary on her days off. Disney combines him with a minor chimney sweep character, and has him work other jobs as well. He’s played by Dick Van Dyke with a really bad attempt at a Cockney accent.

In the book, it’s just Mary and Bert who go inside a sidewalk picture.

In the movie, the children go as well, although the way it plays out is kind of weird. Jane and Michael go off by themselves while the adults sing and dance in a barnyard, then once that sequence is over they’re all four on a carousel. What happened to the kids during the barnyard bit? 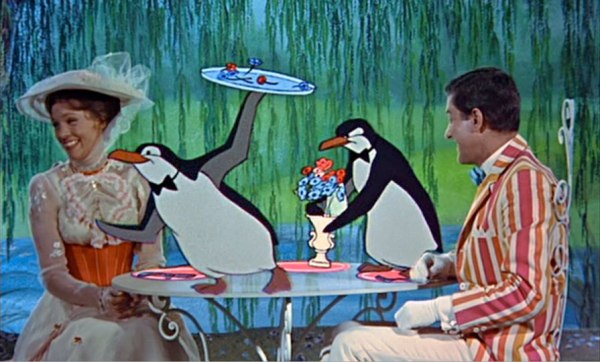 Remember when these guys put rocks in Eddie Valiant’s drink?
This is the one animated sequence in the film, which Travers apparently despised. I think the mixing of live action with animation is clever, but the sequence is rather interminably long. Mary wins a race on a merry-go-round horse, then she and Bert sing “Supercalifragilisticexpialidocious.” There’s some debate over whether the Sherman Brothers made up the word, but I believe they’ve said the basic idea comes from when they used to invent absurdly long words while at camp. I seem to recall it bothering me a bit as a kid that, when Mary said the word backwards, it wasn’t actually totally reversed. She says, “dociousaliexpilistricfragicalirupes” rather than, well, “suocodilaipxecitsiligarfilacrepus.” Yeah, I was a weird kid.

During this song, a big fat woman in the band repeatedly hits her tiny husband over the head with a tambourine, because domestic abuse and couples where the woman is bigger than the man are hilarious.

The episode with Mary’s Uncle Albert and his laughing problem comes directly from the book, although some of the details are altered. Before Andrew the dog tells Mary about this, she plans to visit a piano tuner and Mrs. Corry’s sweet shop, both bits from the book that didn’t make it into the movie. Mrs. Corry and her very tall daughters make an appearance at the beginning, but there’s no indication that she’s, like, millions of years old.

The books also have a kite-flying sequence and Mary riding a carousel, but again they play out pretty differently. I don’t think there’s any precedent for the lengthy but catchy rooftop dance sequence, although it sort of fits the pattern of chapters where everyone in town participates in some chaotic activity, then promptly forgets it afterwards. This is another part where the timing is odd, as the whole bit takes place after Jane and Michael have run away from the bank, but George doesn’t come back home until the end of the song and dance. 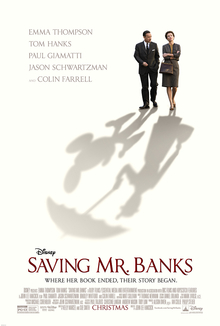 We also watched Saving Mr. Banks, the 2013 film that gave a melodramatic interpretation of how Walt Disney obtained the rights to make Mary Poppins into a film. Tom Hanks plays Walt as a nice, friendly guy; while Emma Thompson’s Travers is stuffy and bitter. She’s rude to everyone and criticizes practically everything in the script, even things that the audience won’t see. From what I’ve read, a lot of the arguments depicted in this film are quite accurate. Travers really didn’t want to sell the rights, and largely did so just because she needed the money. We all know that Disney had his unpleasant side, and the movie’s portrayal of him as totally sympathetic and Travers as unlikable until the good old American man manages to psychoanalyze her and realize she has Freudian father issues just strikes me as overly simplified, even if Walt does admit that he was basically in her position when someone tried to get him to sell Mickey Mouse. Apparently Tom Hanks is distantly related to Walt, and while I don’t think he really sounded like the actual Disney (he seems to slip in and out of an accent), it still worked as a somewhat idealized portrayal of the guy. Beth remarked that he was similar in this movie to how he was in The Ladykillers, so maybe he was supposed to have some dark secrets. I have to wonder if Travers’ insistence that her character was honest was something that actually happened, as her Mary Poppins was even more deceptive than the one in the movie. If there is truth to that, it could be a reflection of how authors sometimes end up writing their characters somewhat differently than they intend. Along these lines, a major point of contention between Travers and Disney was whether there could be any romance between Mary and Bert. The thing is, I think there are definite hints in Bert’s few appearances in the books that he and Mary and more than just friends, although it never comes to the forefront. While it perhaps was not Travers’ intention, I can see where Walt got the idea. As it was, we ended up getting lines in “Jolly Holiday” about how Mary appreciates that Bert would never try to take advantage of her. Obviously I’m against men thinking their female friends owe them romantic and sexual attention, the whole “friendzone” thing that comes up so often these days, but it does kind of seem like Mary is sending Bert mixed signals.

I haven’t seen it, but a Broadway musical version of Mary Poppins opened in 2003, with Travers stipulating when she sold the rights some years earlier that the creative team had to be all British. She also didn’t want any of the songs from the movie in the play, but later negotiations after Travers died allowed for them to be included. The movie kind of felt like it should have been done in this format in the first place, as the pacing issues I mentioned where the plot totally stops for a song and dance are typical of stage musicals. There’s also a Disney movie sequel in pre-production, starring Emily Blunt and Lin-Manuel Miranda and with a cameo by Dick Van Dyke. I really can’t even guess how that will turn out.

5 Responses to It’s a Jolly Holiday with Mary