The Math Behind the Mission

Hidden Figures – I didn’t know a whole lot about this movie prior to seeing it, but I enjoyed it. It’s the story of three black female mathematicians who worked for NASA during the early days of the space program, sort of an unsung heroes kind of thing. They not only were significant to the first manned space flights by the United States, but also in how they broke both gender and racial barriers. The main focus is on Katherine Johnson (nee Goble), played by Taraji P. Henson, who worked on the calculations necessary for John Glenn’s flight. Still, she really didn’t overshadow the other two, Dorothy Vaughan and Mary Jackson. Vaughan, played in the film by Octavia Spencer, was the unofficial supervisor of the West Area Computing Unit, and later learned FORTRAN programming. Jackson worked at the Compressibility Research Division, and eventually became an aerospace engineer. She was played in the film by Janelle Monàe, whom I already liked as a musician. She might actually have looked the least like the person she played, but I’m not sure the photographs they show at the end of the movie were taken when these mathematicians were the same ages they were when the film took place. 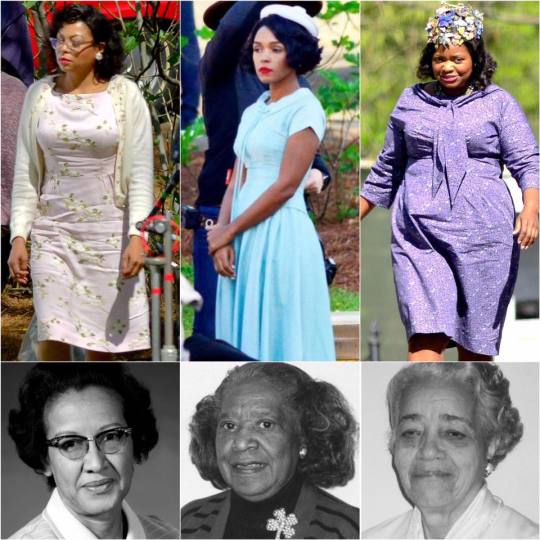 The characters played by Kevin Costner, Jim Parsons, and Kirsten Dunst were not actual people, although I understand Costner’s director was sort of a composite of a few different directors. Parsons played a nerdy guy who was kind of a thoughtless ass, which must have been a real stretch for him. :P As for as accuracy goes, I did notice that Wikipedia reports the segregated West Unit to have closed in 1958, while I believe the movie showed it as still operational in 1962. As it was a movie, the three protagonists were usually able to get ahead through snappy comebacks and doing noticeable work in the right place at the right time. I don’t know how true that actually was, it made it easy to root for them. Assuming this comparison of the movie to reality is itself accurate, Glenn really did personally request that Johnson check the figures calculated by the IBM machine. I remember reading not long ago that “computer” was used to refer to a human making calculations before it switched to being a machine that did the same, something this film makes obvious. I don’t think it was intentional that this film was released only a few weeks after Glenn’s death, so that’s kind of a weird coincidence. Johnson is still alive at ninety-eight, and apparently really liked the movie.

1 Response to The Math Behind the Mission