Although I can’t actually find a post where I do so, I believe I’ve written before about how The Life and Adventures of Santa Claus mentions near the beginning that “[a]ll the immortals are full-grown; there are no children among them.” Then, later in the same book, we’re told that “the Gnome King had children of his own,” that the Frost King is Jack Frost‘s father, and that the King of the Light Elves is accompanied by “his two Princes, Flash and Twilight.” As J.L. Bell has pointed out before, the former need not necessarily be gnome children, and L. Frank Baum’s Nomes (regardless of how they’re spelled) have a habit of keeping human prisoners. And while I always interpreted “his Princes” as meaning the King’s sons, this isn’t directly stated. The Oz books later give hints of immortals being related to one another, most notably with Polychrome, who calls herself the Daughter of the Rainbow. John R. Neill draws other Daughters dancing on the Rainbow in The Road to Oz, and Baum works them into the text starting with Polly’s second appearance in Sky Island.

And according to Tik-Tok of Oz, the Rain King is Polly’s uncle.

This tends to be taken as meaning that he’s the Rainbow’s brother, although again that’s not specifically stated. At least once, in Grampa, Polychrome is referred to as the Rain King’s daughter, but I assume that’s a simple error. We’re never really told how the Rainbow is capable of reproducing, nor does Baum ever give Polly and her sisters a mother. Post-canonical stories by Marcus Mebes and Jeff Rester have given her one: Iris from Greek mythology. As I’ve indicated before, my fondness for mythology makes me appreciate nods to it in Oz stories, but the Baumian immortals have a lot of the same duties the Olympians do, which would create redundancies.

Hugh Pendexter’s The Crocheted Cat of Oz gives a possible out in that the Greek gods have largely retired to another world after their worship fell out of favor.

In general, Baum’s immortals don’t desire worship, and don’t interact a whole lot with mortals. While I don’t know that Baum’s introduction of what could be considered much less competitive gods was intentional, it does seem to fit with the philosophy espoused in his fiction. In the Oz books and related fantasy stories, we see a mix of immortals from classical mythology (nymphs, elves), later folklore (gnomes, goblins), and newly invented ones (Ryls, Knooks). What we don’t really see in canon are family relations among the immortals the way there are among the members of many classical pantheons, but later authors have made some attempts at creating some. In one story I just read, the Snow Queen is identified as Polychrome’s aunt. I wonder what relation she is to the Frost King, or to the Ice King from Eric Shanower’s graphic novel. Hans Christian Andersen’s Snow Queen seems to be at least partially inspired by the Norse goddess Skadi. Margaret Berg’s story “Santa’s Surprise” introduces a chilly cousin of Polychrome named Frostoria, and I think an earlier draft of it might have specified that she’s Jack Frost’s sister.

So maybe the Frost King and Snow Queen are married, and Jack and Frostoria their children? In Wendy Roth’s “Northeast Wind,” Polly’s cousin Ventilation is the titular wind, and he has a nasty brother named Typhonic.

Laura Jane Musser’s “The Romance of the Silver Shoes” gives us Queen Turbulenta, Ruler of the Kingdom of Storms, and her siblings Princess Zephyra (who presides over spring and summer breezes) and Prince Torno (who controls cyclones).

It also mentions the Olympian god Mercury. Interestingly, in Greek mythology, the rainbow goddess Iris was married to the West Wind Zephyrus. 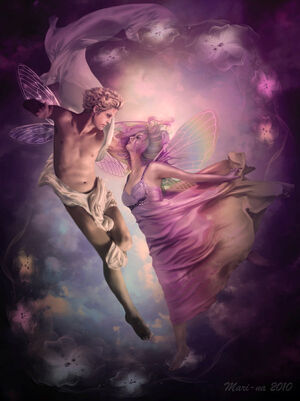 Princess Melody of the Winkie River and her three sisters are also cousins of Polly’s.

And in Royal Explorers, the sea serpents Anko, Unko, and Inko (said here to be short for Ankorgemir, Unkorgemir, and Inkorgemir) are brothers of the Rainbow and Rain King.

Anko is also married to Queen Aquareine, ruler of the mermaids, who according to Philip John Lewin’s Witch Queen considers Lurline‘s sister Enilrul to be her “fairy-aunt.” So does Ozma, for that matter. Pendexter’s Wooglet identifies Aquareine’s father as Aquarus. The more fish-like merfolk, including Arko, Orpa, and the elder Orpah from Giant Horse, are descendants of Inko. As per Paul Dana’s Law, Tititi-Hoochoo is Lurline’s brother, and hence presumably Enilrul’s as well.

There’s probably enough here to devise some sort of family tree. Other connections are certainly possible as well. Is Queen Erma the consort of the King of the the Light Elves? Is Electra related to the Demon of Electricity? There are a lot of possibilities with the mythology Baum introduced.