Here are some thoughts on the four albums I received for Christmas:

The Rutles, Archaeology – Shortly after the release of the Beatles’ Anthology project, Neil Innes reunited with John Halsey and Ricky Fataar to record a new album of Rutles songs. Some of them were unused compositions from earlier, and others songs Innes wrote for other projects to which he gave Beatles-style makeovers. “Joe Public,” for instance, was from a stage show Innes wrote, turned into a pastiche of the Fab Four’s psychedelic numbers. The humor is somewhat broader than it was on the earlier songs as well. “Rendezvous,” a parody of “With a Little Help from My Friends,” has the lead singer arguing with the other band members, in a manner somewhat reminiscent of Stan Freberg. “Unfinished Words,” with its nonsensical words about anchovies on top of strawberries and cream plays on the placeholder “Scrambled Eggs” lyrics for “Yesterday.” “The Knicker Elastic King,” the story of the rise and fall of a guy who sold elastic for underwear, has a Beatles song but is more distinctly Innes in its subject matter. “Shangri-La,” not to be confused with the Kinks song of the same name, has backing vocals containing a lot of inside jokes and other ridiculousness, as well as direct and indirect references to numerous Beatles songs. The horn riff comes directly from “For No One,” and the bridge combines “Magical Mystery Tour” and “Being for the Benefit of Mr. Kite.” I believe this was the only single released from this album. “Back in ’64” is sort of a nostalgic follow-up to “When I’m Sixty-Four,” which includes the clever spoonerism, “People had no time for pouring scorn (and scoring porn).” The German versions of “I Want to Hold Your Hand” and “She Loves You” are parodied in “Baby Si’l Vous Plais,” a version of the earlier “Baby Let Me Be” in terrible French. “My Little Ukulele” is a George Formby pastiche with a bit more of a rock sound. George Harrison was known to be a big Formby fan. The Wikipedia entry explains a lot of the references, and the lyrics are up at Montypython.net. 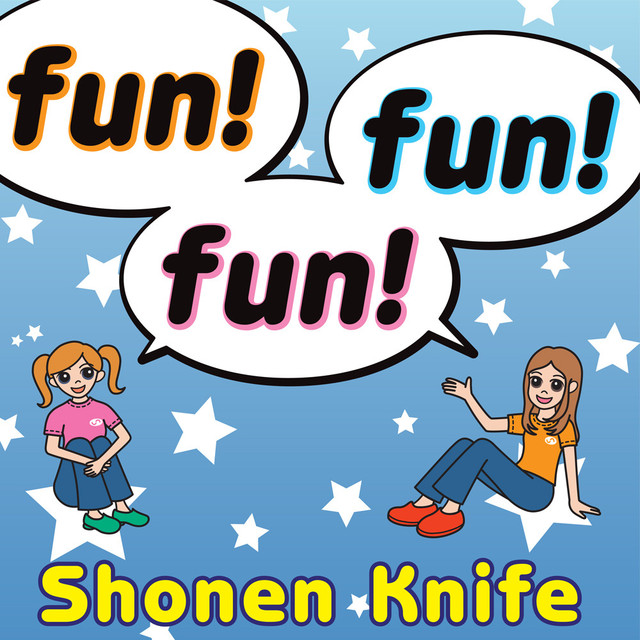 Shonen Knife, Fun! Fun! Fun! – I have a few Shonen Knife albums, but I’m slowly attempting to collect their back catalog. This one was released in 2007, the band’s twenty-fifth anniversary, although the English-language version didn’t come out until 2009. It’s pretty typical for their sound, pop music with punk elements and simple, cute lyrics. Subjects covered here include barnacles, cookies, popcorn, and the band’s fondness for the Ramones. The title is definitely appropriate.

The Minus 5, Dungeon Golds – The songs on this release are from an earlier limited edition vinyl collection called Scott the Hoople in the Dungeon of Horror, which I don’t remember hearing about, but probably couldn’t have gotten anyway. I believe the title is a reference to the fact that it was mostly recorded in Scott McCaughey’s basement, but it makes me think of the fantasy role-playing cliché of dungeons always being full of treasure. Most of McCaughey’s work consists of instantly catchy rock numbers, and the songs here are no exception. While there isn’t a whole lot of variety in style, there’s some great instrument work and forays into a few different sub-genres. “My Generation” and “Zero Clowns” feature crunchy, distorted guitar. “Adios Half Soldier” appears to be about a guy who lost his legs in battle. “It’s Magenta, Man” is rather psychedelic. There’s a nice organ part on “Hold Down the Fort,” while “The Unforeseen” has more of a country sound.

Marcella Puppini, Everything Is Beautiful – The first solo album by the lead singer of the Puppini Sisters, and the only member of that group actually named Puppini. It apparently hasn’t received an American release, and the liner notes are in Italian, but the lyrics are still mostly in English. It’s very jazzy and mostly cheerful, but obviously there’s less focus on harmony than with the Sisters. Marcella is credited as writer or co-writer on all the tracks, which I assume means there aren’t any covers. There’s pretty heavy synthesizer use throughout, with most if not all of the percussion programmed. As such, it sounds more modern, or perhaps sort of nineties-ish. Rapper R.A. the Rugged Man does a duet with Marcella on “The Greatest.” “Let’s Stay in Bed” has a samba rhythm. I’m not sure what style I’d consider “I Know You Lie,” but it’s not really jazz. I think I could sort of imagine it as a Blondie song from the seventies. Overall, it’s a very enjoyable listen.