I was thinking today how weird it is that many people, including me, have complained both about Donald Trump keeping his campaign promises AND his frequent lies. So he’s damned no matter what he does? Well, sort of, but I think it does make sense. Part of it is just that Trump is always contradicting himself; I believe it was John Oliver who said that, in a logic puzzle, he’d be both the guy who always tells the truth AND the one who always lies. Really, though, I think there’s a general narrative he has that IS largely consistent, if also chaotic. He might lie a lot, but it seems that he’s not very good at it. When someone makes totally clear that he’s in favor of lower corporate taxes, cutting health care, and silencing the news media, can you really buy that he’d be a champion of the working class?

One point he made during the campaign that actually could have been valid was that, as someone who took advantage of government corruption, he’d have some idea how to fight it. It’s like former criminals joining with law enforcement to catch other criminals of the same sort. I get the impression most of these people are at least somewhat remorseful about what they did, though, and I never got that vibe from Trump.

Other lies Trump and his team have told are not only obviously untrue but also rather pointless; does it really matter in the end how many people attended his inauguration? And there are some statements he’s made that are basically self-contradictory. Not only is Trump saying that no one respects women more than he does laughably false, but bragging about how much you respect someone is pretty contrary to the very notion of respect. Or “I have a good relationship with the blacks.” And yet you still call them “the blacks”? Even if there weren’t plenty of other examples of blatant racism from Trump, insisting you love an entire race indicates you don’t really care about them as individuals. I hear that about Jews as well, with people making antisemitic comments and then saying, “I love the Jews!” I’m not sure if Trump has said this, but he has made remarks about trusting Jews with his money, essentially trying to make a stereotype sound positive. To me, it just sounds like, “They’re money-grubbing bastards, but I can use that!” That Trump is greedy, egotistical, misogynistic, and a user of others isn’t based on a secret psychological profile, but the image he’s purposely crafted over the years, and has likely bragged about. So why would anyone be surprised that he’s pursuing an agenda that matches what he’s clearly supported? Admittedly, I thought it might take him a little longer, but I’m hardly shocked. But just today, I saw a link to this collection of people who voted for Trump and are now angry that he’s doing exactly what he promised.

Part of it just seems to be the usual belief that it’s okay to screw people over as long as those people aren’t you or anyone you consider part of your group. I tweeted today about how little sense it makes to have a knee-jerk reaction against socialism, then vote for someone who says he’s going to bring back jobs. How would that even be possible without government interference in business? But again, I think it boils down to being okay with socialist policies when they help YOU, but not when it helps those you consider unworthy. Still, even with this in mind, I’d have to think anyone who thought Trump would help anyone other than himself or people he owes favors must be at least somewhat delusional.

To me, Trump really sounds like a snake oil salesman, untrustworthy by his very manner. But a lot of people actually BELIEVE scammers like this, especially if they propose conspiracy theories that match theirs. The border wall he says he wants to build would be a pointless, wasteful symbol that wouldn’t keep out anyone who’s actually determined, but a lot of Americans were convinced it would work before Trump claimed the idea as his own. I remember when he claimed during the primaries that he’d gotten the Republicans talking about immigration, when he actually had pretty much the same view as most of the other candidates. And a lot of people already feel they can’t trust the media, so going along with this works out well for Trump, who already had a vendetta against the news for telling the truth about him (and, really, in a much milder way than he deserves). Not that you SHOULD totally trust the media (they make mistakes sometimes, and usually have to kowtow to their sponsors), but for some reason people who believe they can’t trust one source at all also implicitly believe some other source. Practically every biologist on Earth is part of some conspiracy to promote evolution, but your church’s interpretation of a book from the Iron Age is the total, absolute truth, and you’ll go to Hell if you doubt it. Network news has a left-wing bias and can’t be trusted, but everything you hear on Fox News is absolutely accurate. I’m not sure why it seems to work this way. It’s like everyone has a certain amount of trust they have to dole out, so if you don’t want to evaluate each source individually, you have to give ALL of it to one and none of it to others. I do have to wonder if those tweets represent a significant portion of the population, not that it matters much if the government is going to continue giving him carte blanche to do whatever he wants. 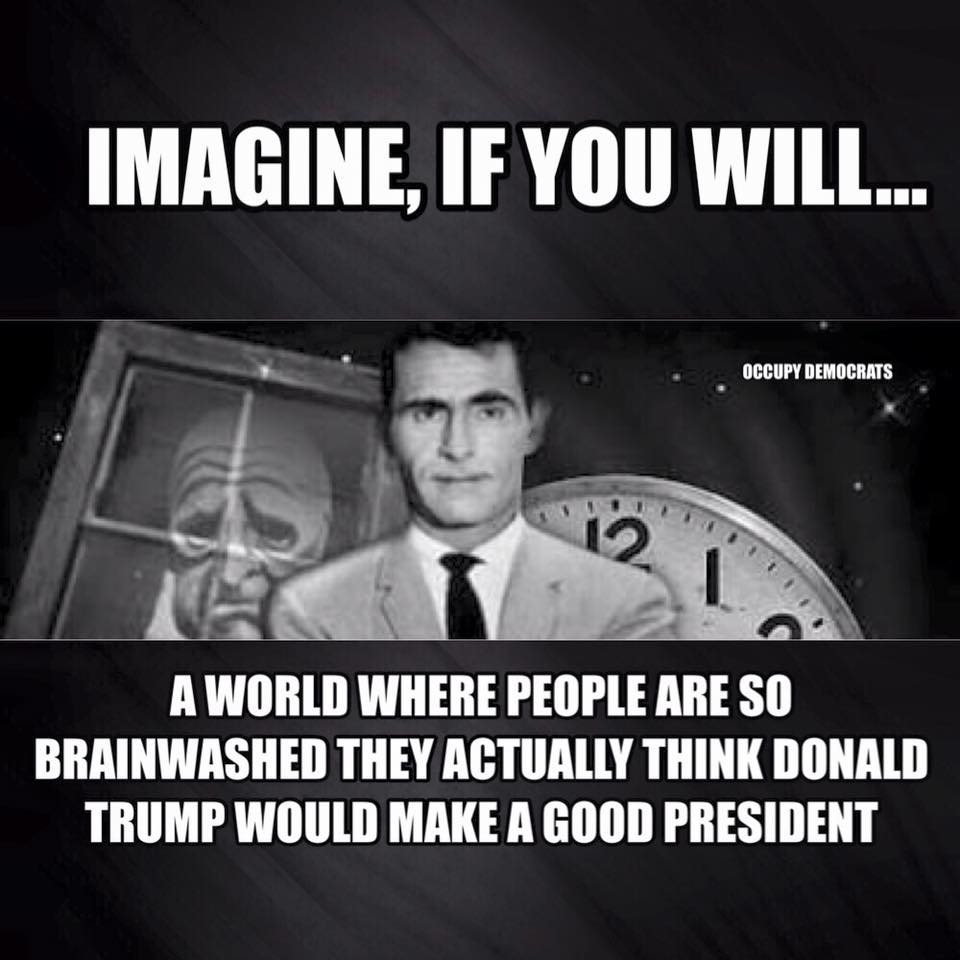 1 Response to Trump and Consequences