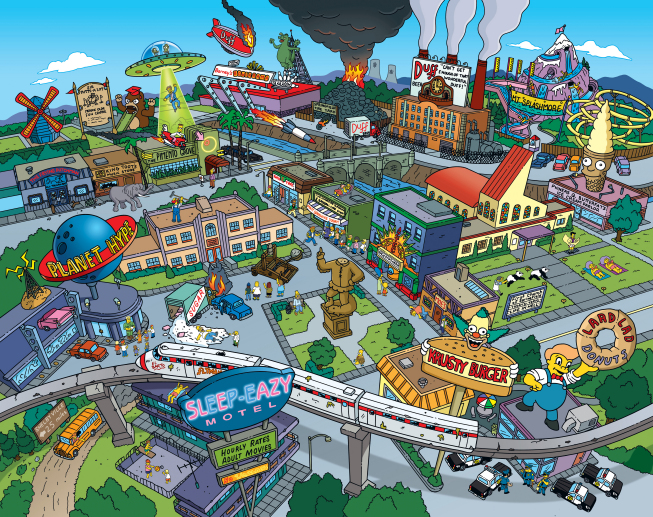 YouTube recently recommended this series of Simpsons Mysteries videos, which are interesting to people like me who tend to over-analyze just about everything we enjoy. Obviously the show negates any real notion of continuity in time or place. Springfield can be wherever it needs to be for a particular story or joke, and it’s pretty much always set around when an episode airs, but with the characters either not aging or aging rather haphazardly. I wrote about the floating timeline before, and established that the characters staying the same age (and not realizing they’re staying the same age) is an integral part of the show, but it still sometimes bugs me when characters’ ages relative to each other are altered. I’d written it prior to the recent episode “Much Apu About Something,” in which Apu’s nephew Jamshed, who was a toddler in “Homer the Heretic,” had grown up, when of course the other kids have stayed the same age. 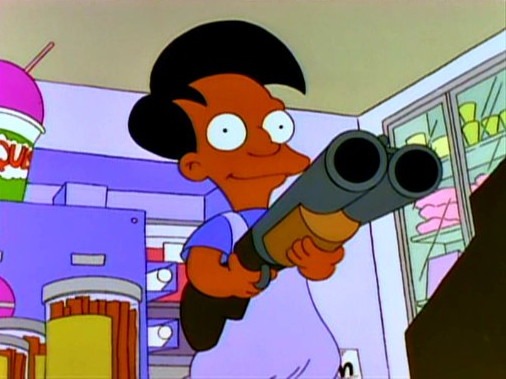 I also didn’t mention “Springfield Up,” an episode that suggested practically every significant adult character was the same age, even though Kent Brockman was already a newscaster and Clancy Wiggum working security at college when Homer was still a kid during the flashbacks in “Mother Simpson.” 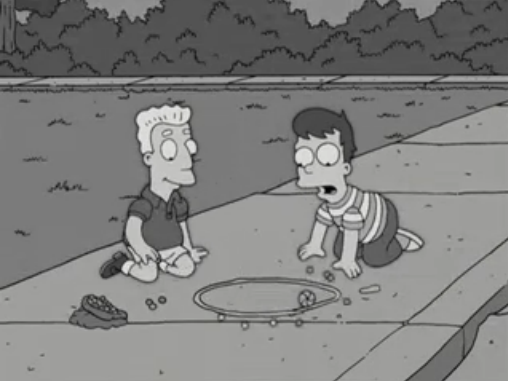 And Ned Flanders was established as being sixty in “Viva Ned Flanders” despite being a child in a film from thirty years earlier in “Hurricane Neddy.” The age-changing doesn’t generally affect the stories much, but I find it adds verisimilitude to have the characters at different ages and from different backgrounds; they can’t ALL have grown up in Springfield, and some specifically say in other episodes that they didn’t. I don’t really mind Lenny, Carl, and Moe being established as childhood friends of Homer’s; it’s a bit of a retcon, but doesn’t specifically contradict anything. 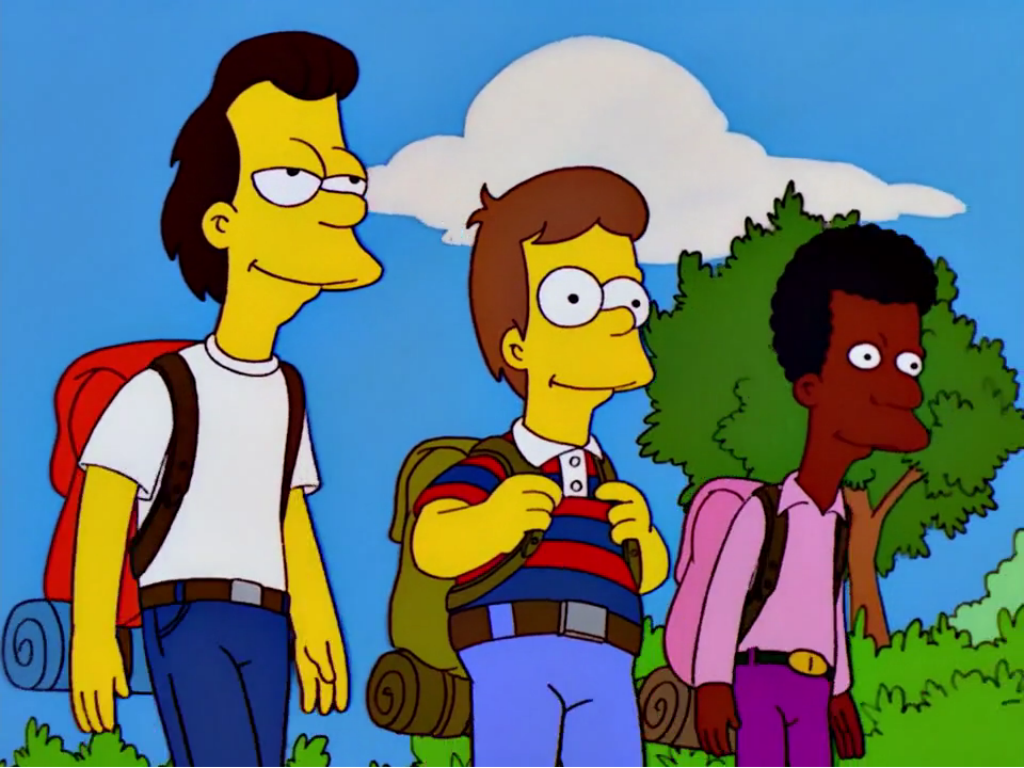 Besides, Moe is at least usually portrayed as a bit older. But anyway, the video on the past has a good hypothesis on why “That 90s Show” was an overall unpopular episode. After it was decided to set “The Way We Was” in 1974, the next few flashback episodes established the year in which they took place, the Simpson telling the story gave some background information on it, and there were quite a few references. Even way back in the early days, this meant that the math didn’t quite add up. Bart was born in 1980 and Lisa in 1984, but they’re only two years apart, because the episodes telling these stories came out two years apart. Still, since each new one took place after the last, there was some level of consistency to the timeline. Okay, “And Maggie Makes Three” and “Lisa’s Sax” were out of order, but not by that much, and I don’t think the former specified a year. The latter takes place in 1990 even though it aired in 1997 and flashes back about five years, because it was one of a few holdovers made about two years earlier. I don’t think it even had that many references to the time, though, other than Homer watching Twin Peaks. Later episodes tended not to use the year thing at all, probably because it would just be too confusing. “The Way We Weren’t” makes a joke out of it, with Homer saying he was ten at some point between the fifties and seventies, although I think most of the references fit better with its taking place in the seventies. Then, when we get to “That 90s Show,” it once again has the scenes from the past occur in a specific decade, which makes sense if you use the old method of taking the characters’ ages and counting backwards, but becomes problematic when you realize it has to take place in between the flashbacks in “The Way We Was” and “I Married Marge.”

And episodes both before and after that one still have Homer and Marge as seniors in high school in 1974, which the video suggests must be the anchor point in the floating timeline.

But then, even some brief looks to before that year were affected by the sliding, as Homer was a teenager during the Moon landing and considerably younger at Woodstock, both of which took place in 1969. 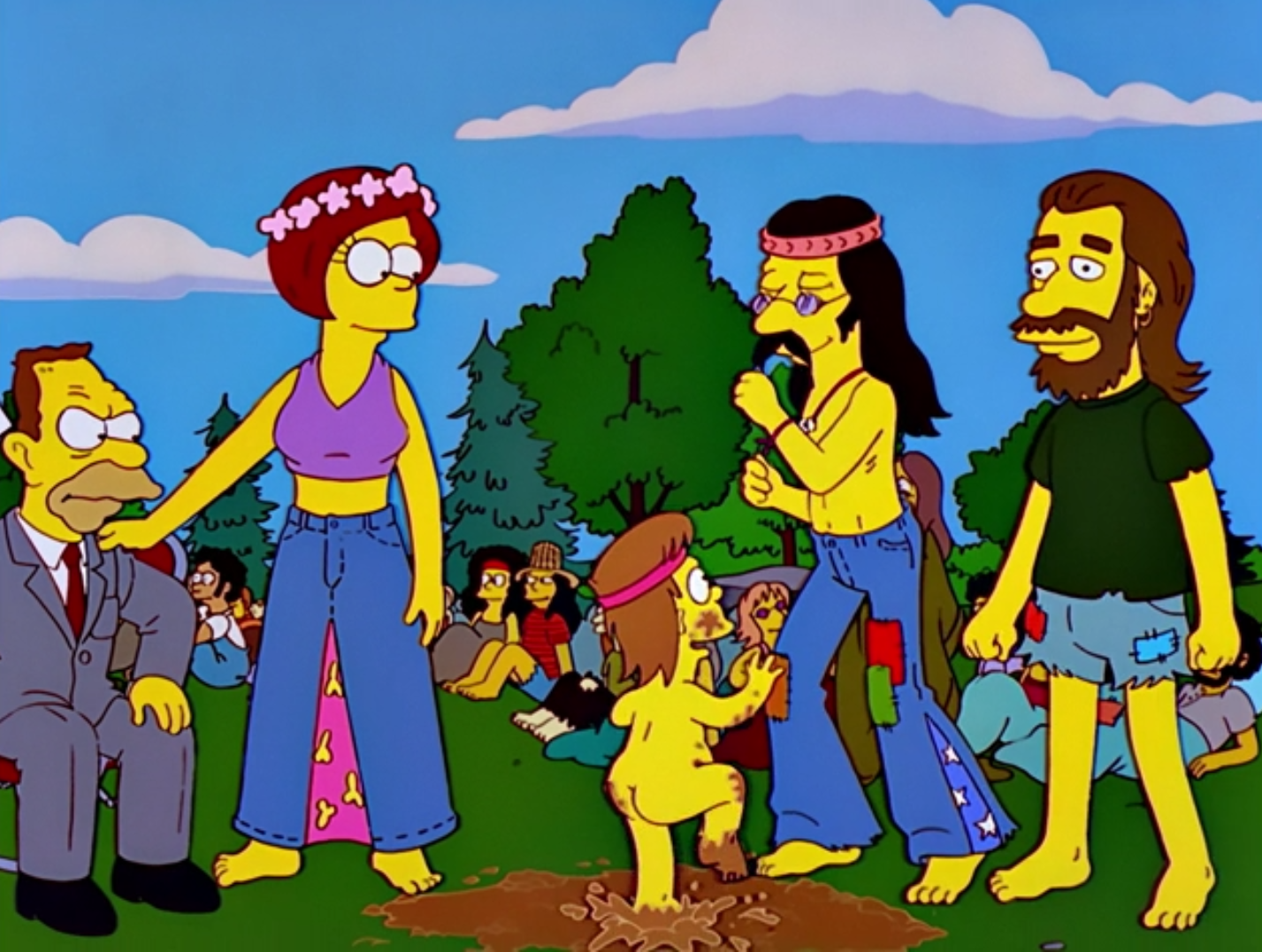 Homer’s mother also left Abe in that same year, but since she recognizes Lenny and Carl in “My Mother the Carjacker” and Homer met them at camp during “The Way We Was,” it would presumably have to have been after that. So “That 90s Show” certainly didn’t START the confusion about the past, but it definitely exacerbated it, especially as it was an entire episode instead of just a gag.

Now that I’ve addressed time, I’m also going to look at space. No, not at the episode “Deep Space Homer,” but at the geography of Springfield. We already know it’s variable and doesn’t entirely match anywhere in the United States, especially after the reference in “Half-Decent Proposal” that West Springfield is three times the size of Texas.

As far as internal geography goes, I’ve looked several times at this fan-made map of Springfield, which I believe was last updated in 2004. That means no Sprooklyn or Bart Boulevard, for instance. Still, it includes pretty much everything from up to that point, arranged in a way that makes as much sense as possible when you consider that the writers would sometimes do things like put the parking lot for the nuclear power plant behind the Simpsons’ house, move the entire town five miles over, or insist there’s only one way in or out of town for the sake of a joke. Atlas Obscura has a collection of maps and representations of Springfield, and while the map I mentioned is obviously unofficial, it does appear that someone on the staff took note of it. The map of the now-defunct (well, defunct as of the time of the episode, at least) subway in “Postcards from the Wedge” doesn’t match the fan map exactly, but it’s pretty close.

It even does the same workaround for the specific mention of 257th Street in “Bart Sells His Soul” without having to actually depict 257 streets. Not that it makes much sense to just randomly call a street 257th, but this IS the same town that built an escalator to nowhere (Second and Euclid Streets on the big map). That also means Bart didn’t run anywhere near as far as suggested in “Soul,” though. Maybe it’s part of the reality-warping nature of Springfield that extra streets sometimes appear just to provide a plot contrivance. We do see him cross 156th and 181st Streets, after all. We do see a working subway in “The Winter of His Content,” and it serves not only Springfield but Shelbyville and other surrounding areas as well.

Subway route maps like the one Bart looks at are never to scale, but it does provide relative locations for some places seen in earlier episodes, and the arrangement doesn’t seem to match up at all with the unofficial map. On the other hand, it has some good jokes, and isn’t that what it’s all about?