There was a Simpsons tie-in book released in 1991 called The Simpsons Uncensored Family Album, credited to Matt Groening, although I don’t know how much of it he actually wrote. As with most of these tie-ins, the information is pretty accurate to what had been seen on the show at the time, but the show itself has contradicted it since then. One particularly interesting aspect of this one is that the endpapers are Homer and Marge’s family trees, going back many generations.

Since then, both of them have mentioned other extended family members not included on the family trees, usually just for brief gags. I doubt that the writers have kept up with all of them, although some fans have certainly tried. But the family trees include some more basic contradictions, like how Marge’s mother is called Ingrid, while the show later consistently established it as Jacqueline. It’s the same with Homer’s mother, called Penelope in the album, but Mona on the show. There was a nod to the book with Penelope Olsen being one of the aliases Mona used while on the lam, however. 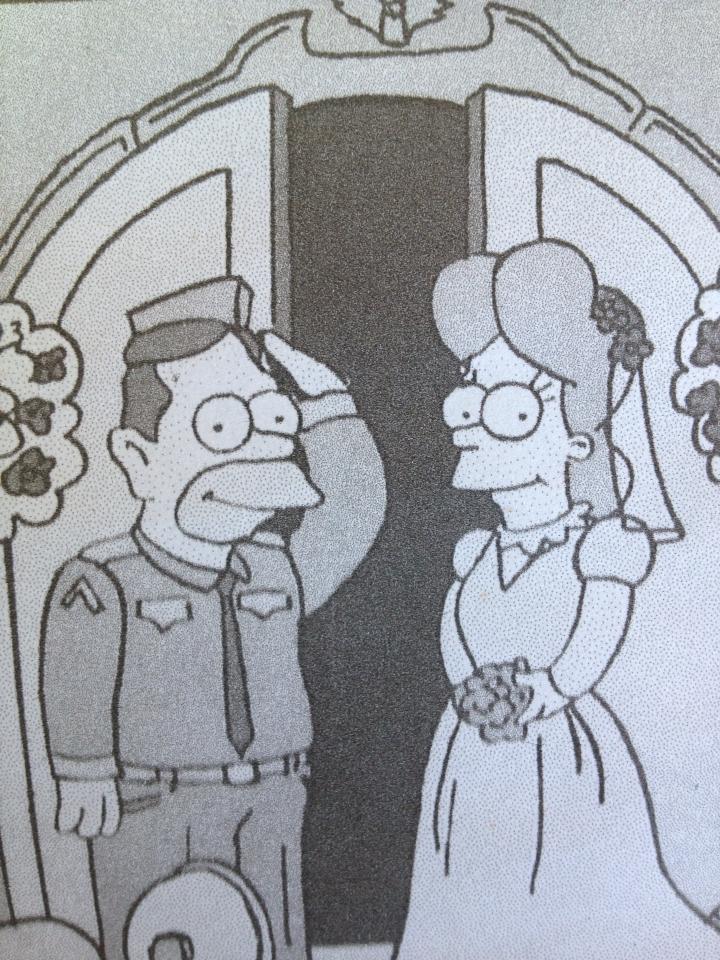 I don’t think the maiden names of Gurney and Olsen have ever been contradicted, although “Selma’s Choice” introduces (posthumously) a never-married sister of Jackie’s who is called Gladys Bouvier. Unless Bouvier was was Jackie’s maiden AND married name, this would almost certainly have to be a mistake. Marge’s father, never named on the show but called Clancy in the album, was said in Simpsons Illustrated magazine to have died in a roller coaster accident, and apparently the writers were considering establishing this on the show, but never did. In last season’s “Puffless,” it’s revealed that he actually died of lung cancer. 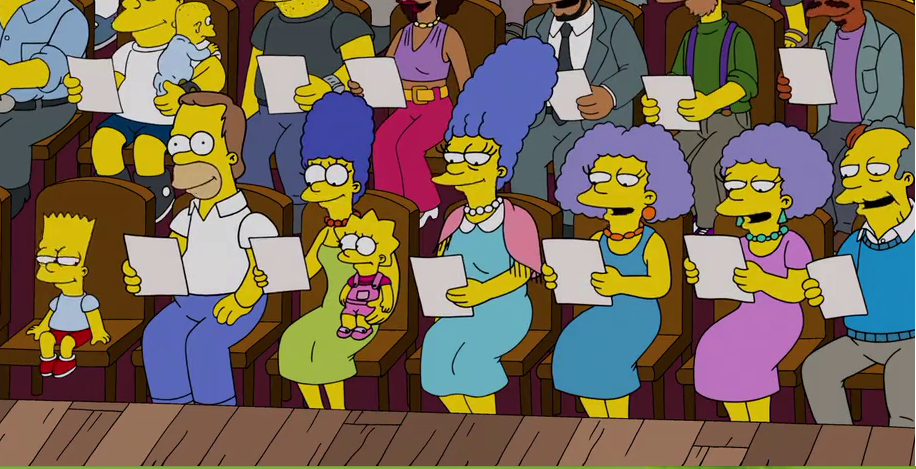 As for Homer’s family, it’s certainly possible to work some of the relatives mentioned on the show into the family tree.

For instance, when the extended Simpson family pays a visit in “Lisa the Simpson,” one man introduces himself as Great-Uncle Chet, who runs an unsuccessful shrimp company. He would presumably have to be Abe’s brother. As far as I can recall, the only episode that says much about the family’s distant ancestry is “The Color Yellow,” in which Abe reveals that his great-great-grandfather was a slave named Virgil who had escaped to Canada, and that Virgil’s son Abraham, named after Lincoln, was also his own namesake. He didn’t reveal this to anybody until the time of the episode, due to rampant racism, and it was apparently widely thought that Abraham’s father was Hiram Simpson, the first husband of Virgil’s wife Mabel.

According to the family tree, however, Abe’s paternal great-grandfather was named Howland, son of Garwood. The Simpsons Wiki proposes that both Hiram AND Virgil were cut out of the family tree to avoid controversy. Mabel, by the way, looks exactly like Marge, but presumably isn’t related to her. I guess it’s like Back to the Future, where the McFly men are predisposed to be attracted to unrelated women who all look very similar. In “Much Apu About Nothing,” Abe claims that his he emigrated from Europe with his father, but since the story ends with the family living inside the Statue of Liberty (in addition to Abe’s generally terrible memory and often ridiculous tales), there’s reason to doubt its veracity. Still, it’s possible that his ancestors moved to Europe from Canada, then eventually back to their ancestral home in Springfield. According to one of Abe’s other stories, he also spent as least part of his boyhood in Albany. Homer claims to have a living grandfather he never sees in “The Winter of His Content,” but we don’t know which grandfather this is, or if it’s even true. He also says in “Little Big Girl” that he had a Native American great-great-grandmother, which is confirmed in the family tree with Winifred Running Goat. Abe himself has been married at least four times, even though I don’t think it’s ever established that he officially divorced Mona, his other wives being Rita LaFleur, Amber Pai Gow, and Selma. And according to “Puffless,” he still carries a torch for Marge’s mother, despite the fact that he was briefly married to her daughter. But then, Abe doesn’t seem to have much of a sense of shame. He also has at least two illegitimate children from before he married Mona.

The family tree establishes that the Simpsons are distantly related to Mr. Burns through a series of marriages, and I don’t think the show has contradicted this, although Burns’s family is also a complicated issue. A flashback in “Rosebud” has him leaving his biological parents to live with a “twisted, loveless billionaire.”

His mother is still alive as of “Homer the Smithers,” and she’s apparently the same as the mother in “Rosebud” and the more recent “Monty Burns’ Fleeing Circus.” And in “The Color Yellow,” he says that Colonel Burns, who kept Virgil as a slave, was his father. Speculation on the wiki has it that the billionaire was actually Charles Montgomery’s grandfather, Colonel Wainwright Montgomery Burns. Since Springfield had slavery in the 1860s but never seceded from the United States, that suggests it’s in a border state, but obviously there are other references that suggest otherwise. A Google Image Search brought up this Reddit page with a scan of a comic describing Burns’s father’s life, but: 1) I don’t know the origin, and 2) the comics generally aren’t considered canonical. 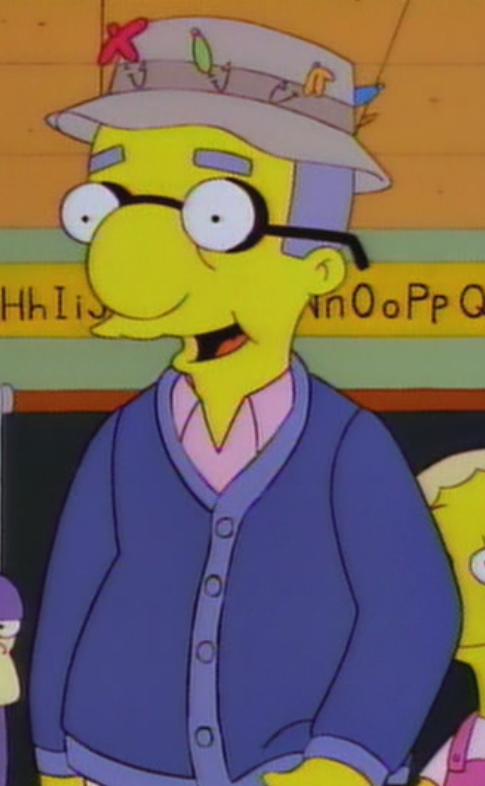 In “A Milhouse Divided,” Luann claims that her father gave Kirk the job as cracker factory manager, so he might be the guy who fires him later in the episode. Grandpa Van Houten mentions a new wife, so he’s presumably divorced from Kirk’s mom. 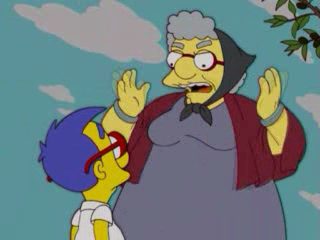 Luann’s mother lives in Italy, and she was born in Shelbyville. Milhouse says at one point that his parents are cousins, and first-cousin marriage is common in Shelbyville according to “Lemon of Troy.” That could mean that two of Milhouse’s grandparents are actually siblings. Or maybe it’s all just a bunch of jokes, but what fun is that? Well, a lot, actually, but I’m geeky enough to think it’s even more to try to fit it all together.

There’s no new Simpsons episode tonight, as the Oscars are on another channel. I DID manage to watch the one I’d missed from last season, though, and it was pretty good. I believe that means I’m now all caught up until next week.