You May Find Important Pieces Gone

Cautionary tales to try to convince children to behave seem to be pretty much universal, even though it’s quite possible they do more harm than good. I’ve written before about boogeyman legends, and along much the same lines is the nineteenth-century German children’s book Der Struwwelpeter, in which kids are punished for their bad habits in extreme and often absurd ways.

A boy who won’t eat soup starves to death, a careless hunter’s gun is stolen by a hare, a girl who plays with matches burns herself to death, and a kid goes out in a storm and is blown away. 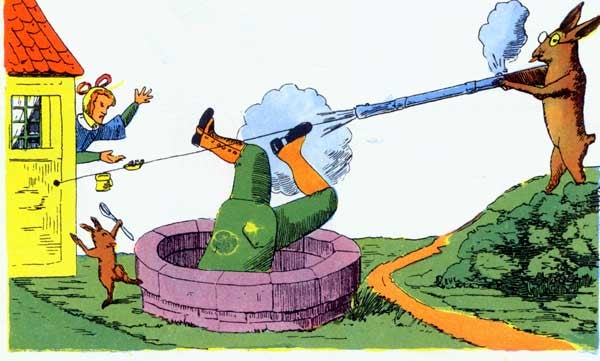 And in one story that’s particularly weird by today’s standards, a giant wise man dyes some white kids with ink because they were making fun of a black boy.

It’s obviously against racism, but in a strange way. Did I mention that the guy who wrote this was a psychiatrist? Dr. Heinrich Hoffmann couldn’t find a book he wanted to give his son for Christmas, so he wrote and illustrated his own. His original title was Lustige Geschichten und drollige Bilder, which translates to Funny Stories and Droll Pictures. I’m not sure if he intended the name to be sarcastic, but it doesn’t sound like it. It later came to be given its current title, meaning Shock-Headed Peter, after its first story. It’s strange to see two W’s in a row, even in German, and remember that these W’s are pronounced like V’s. Interestingly, while Peter is totally grotesque for not grooming himself, he doesn’t actually receive any direct punishment.

This statue is located in Frankfurt. I took the picture from here.
The most famous story in the book might be “Die Geschichte vom Daumenlutscher,” or “The Story of the Thumb-Sucker.” When a boy persists in sucking his thumb, he receives a visit from the “great, long, red-legg’d scissor man,” a tailor with a giant pair of shears who cuts off his thumbs.

What’s more, his mother basically just says, “Told you so.”

Picture by Maren Marmulla
I believe the first time I heard of the scissor man was in the XTC song from the album Drums and Wires, long a favorite of mine.

Not having seen the relevant picture when I first became familiar with the song (not that I could remember, anyway), I couldn’t help imagining Cut Man from Mega Man.

And just because I like it, here’s Robin Goldwasser’s cover of the song.

In general, it seems like the book is better known in the United Kingdom than in the States. In Jasper Fforde’s The Fourth Bear, part of his Nursery Crime series, a parent who’s less accepting of nineteenth-century German morality joins Detective Jack Spratt in a sting operation to catch the Scissor Man. A version of the character also appears in Terry Pratchett’s Hogfather as one of the childhood fears that manifests in the Tooth Fairy’s house. This Scissor Man is much more unnatural in appearance than the tailor in Hoffmann’s illustration, described as “something like an ostrich, and something like a lizard on its hind legs, but almost entirely like something made out of blades.”

Not Pratchett’s Scissor Man, but another fantastic interpretation of the character, by Sanya Glisic
There is one prominent American reference, however, in that the movie Edward Scissorhands is frequently mentioned as showing influence from Struwwelpeter, both with the character’s scissors for hands and his hairstyle reminiscent of Peter’s.

Family Guy also did a parody of the Thumb-Sucker story, albeit without the Scissor Man.

This New York Public Library article mentions other media influenced by the book, including parodies about Kaiser Wilhelm, Hitler, and Richard Nixon.

Maybe now it’s time for Struwweldrumpf. The Donald certainly has the hair for it. Okay, I checked, and apparently it’s been done.

I can’t say I found this video all that funny, but it was well-made.

2 Responses to You May Find Important Pieces Gone