My re-watch of the Star Trek movies has reached the end of the films starring the original cast. I’d seen these two before, but only once each a long time ago. For the most part, I think I have to agree with the traditional wisdom that the even-numbered movies are the good ones. The problem with the odd-numbered ones mostly seems to be poor organization; they contain some good ideas, but aren’t implemented well. With the first and third, nothing really happened. The fifth, on the other hand, seems like it tried to incorporate way too much. But let’s take a closer look at it.

The Final Frontier – This one was William Shatner’s directorial debut, and seems to be widely considered the worst of the lot. The main villain, Sybok, is a renegade Vulcan cult leader who thinks he’s found the physical home of God. He’s also Spock’s half-brother. He takes the Federation, Klingon, and Romulan ambassadors to Nimbus III, the Planet of Galactic Peace in the Neutral Zone, as hostages in order to gain access to a spaceship. Not surprisingly, this turns out to be the Enterprise, even though the new model is not yet fully functional. Starfleet’s reasoning is that they need an experienced commander, but it seems like they could just give Kirk command of a different ship. The crew is currently on shore leave at Yosemite National Park, where Spock is confused by the lyrics to “Row, Row, Row Your Boat” and refers to marshmallows as “marsh melons.”

Apparently the novelization says that Dr. McCoy changed the references in Spock’s database as a practical joke, which seems awfully far to go to defend an out-of-character joke. It would actually make more sense if “marsh melons” had become the standard name by the twenty-third century; there have certainly been stranger word mutations. But that seems to be the order of the day in this movie. Star Trek IV was jokey, but there the humor largely came from the characters and their situation. Here, we just get gags for the sake of gags. Sulu and Chekov blow into a communicator to simulate a blizzard because they don’t want to admit they’re lost, there’s a goofy sequence involving Morse Code, and Scotty bangs his head on a beam after mentioning how well he knows the ship. Due to inoperative transporters, the crew members have to take a shuttle to the planet’s surface, then steal some horses to reach the capital city. So Uhura does a fan dance to distract the stable hands, who are luckily all attracted to human women despite all the alien species living on this planet.

I understand that was a jokey suggestion that ended up actually making it into the movie, which might well be how the whole thing was written. The Enterprise crew rides into the capital, Paradise City, where there are some pretty girls but no grass that I noticed.

They take Sybok and his hostages back to the ship, where the cult leader takes control and takes the ship to a planet in the center of the Galaxy that he calls Sha Ka Ree after the Vulcan equivalent of the Garden of Eden. According to people who know more about the franchise than I do, there’s no way the Enterprise should have been able to get there that quickly even at maximum warp, but that might be the least of this movie’s problems. I also found it a little odd how Sybok, despite referencing old Vulcan mythology, mostly has a very human understanding of God. He also uses examples from human history of people achieving what was previously thought to be impossible, even though Vulcans presumably accomplished such things on their own. I guess it makes sense that someone who’s turned against Vulcan teaching would be obsessed with Earth, but it still rings a bit false to me. The ship reaches Sha Ka Ree and Kirk, Spock, Sybok, and McCoy all land there, encountering a being who claims to be God but is obviously a fraud.

I’m pretty sure Kirk has been through this exact same scenario several times in the past. In this case, the deity is actually a malevolent entity who’d been trapped on this planet, and wants to use Kirk’s ship to escape. The four visitors claim that God would provide proof and wouldn’t hurt others for his own amusement, which suggests they aren’t really that familiar with many actual religious conceptions of God. But anyway, Sybok sacrifices himself to allow the others to escape, and that’s pretty much it. Well, I didn’t mention the Klingons who are pursuing the Enterprise just for target practice because they have very little bearing on the plot, but they’re there and are reprimanded for their actions. I kind of wish there had been more focus on Caithlin Dar, the Romulan ambassador, really just because I like how she looks. 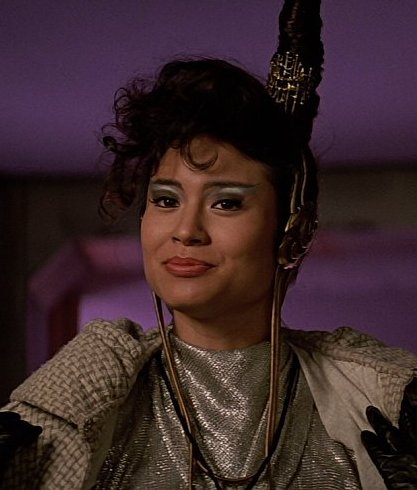 The ending gives the impression that she hooks up with the Federation ambassador, St. John Talbot, who’s played by the guy who was Professor Perry in Teenage Mutant Ninja Turtles 2, and is also Chancellor Gorkon in the next film.

There were some promising ideas in the movie, but overall it mostly came across as disorganized. The Undiscovered Country – The last film to focus on the original cast provides a bit of a bridge to The Next Generation by having the Klingons begin to make peace with the Federation. Michael Dorn is even in it as Worf’s grandfather, who is sympathetic to Kirk and defends him at his trial. I’m getting ahead of myself here, though. Praxis, the moon of the Klingon homeworld (and presumably where the standardized test for education majors originated), explodes due to over-mining, causing danger to the planet’s atmosphere. Since the Klingons have invested so much in the military, they don’t have the resources to deal with this. It’s sad how many of these timely moral messages are still relevant today. The Klingons want to make a treaty with the Federation, and Spock volunteers the Enterprise to escort the Klingon ambassador, against Kirk’s wishes. Kirk still holds the Klingons responsible for the death of his son, even though the particular ones who did that are dead at this point. It’s true that the Klingon representatives at the beginning of Star Trek IV didn’t apologize for this, but still. Is this an optimistic future or isn’t it? I get what the movie was going for in terms of Kirk learning to overcome his prejudices, but I kind of think they laid it on too thick not just with him, but the humans in general, with the blatantly racist comments. But maybe there’s something to it. The original series, with its multi-ethnic cast, represents a hope that people can set aside their differences, so it fits that they’d eventually make peace with the Klingons as well. On the other hand, it kind of seems like racism still exists but is simply directed elsewhere, toward alien beings. The movie was from 1991, and it was later that year that the Soviet Union fell, inspiring a feeling of hope in the real world. On the other hand, it was also the year of Operation Desert Storm, the beginning of the ongoing conflict between the United States and Iraq. It’s interesting to look at the film in that light.

But anyway, after the Klingons have dinner with the Enterprise crew and we learn that they love Shakespeare, a torpedo attack on the ambassador’s ship results in his death. As there are no other visible ships in the area, Kirk and McCoy are arrested for assassination, and end up in a prison camp that’s basically the Klingon Gulag.

A shapeshifter helps them to escape, but double crosses them once they escape the magnetic barrier. Fortunately, the Enterprise is there to pick them up, managing to enter Klingon space by pretending to be a freighter. This follows a weird scene where the crew, fearing that their universal translators will lead to their discovery, instead cobbles together some bad Klingon with paper dictionaries. Would the Klingons have been able to identify them with a simple translation program? And even though translators are standard in this time, couldn’t they have brought along an interpreter in case of failure? I’m also not sure why Spock is so sure that whoever changed the ship’s data banks to say it had fired torpedoes when it hadn’t must still be on board. Couldn’t it have been hacked remotely? I mean, Kirk was able to remotely disable the shields on the Reliant by inputting a code, right? Regardless, it turns out that the double agent on board Enterprise is Valeris, the new Vulcan helmsperson (to replace Sulu, who is now captain of the Excelsior) whom Spock greatly admires. She’s played by Kim Cattrall, continuing the trend of really weird casting choices in these movies.

Also involved is General Chang, the Klingon ambassador’s chief of staff, who’s played by Captain von Trapp from The Sound of Music. Actually, Christopher Plummer has played a lot of roles in both film and theater, but that’s the one I tend to associate him with.

The character’s love of Shakespeare might have been at least partially referencing how Shatner was once Plummer’s understudy in several Shakespearean plays. The Enterprise crew destroys Chang’s Bird of Prey and prevents the assassination of the Federation President, and that marks their last official adventure together. It’s now time to turn over the reins to the Next Generation cast, although Kirk’s story isn’t quite over yet.

4 Responses to Always Going Forward, ‘Cause We Can’t Find Reverse