Get Out – I’d heard good things about this movie, but really knew nothing about it other than that it was a horror film (or at least horror-adjacent) and that it dealt with racism. I can’t say I know much about Key and Peele, either. Beth and I finally watched this last night, and I found it effective. There are definitely going to be some significant SPOILERS in here, so proceed with caution. 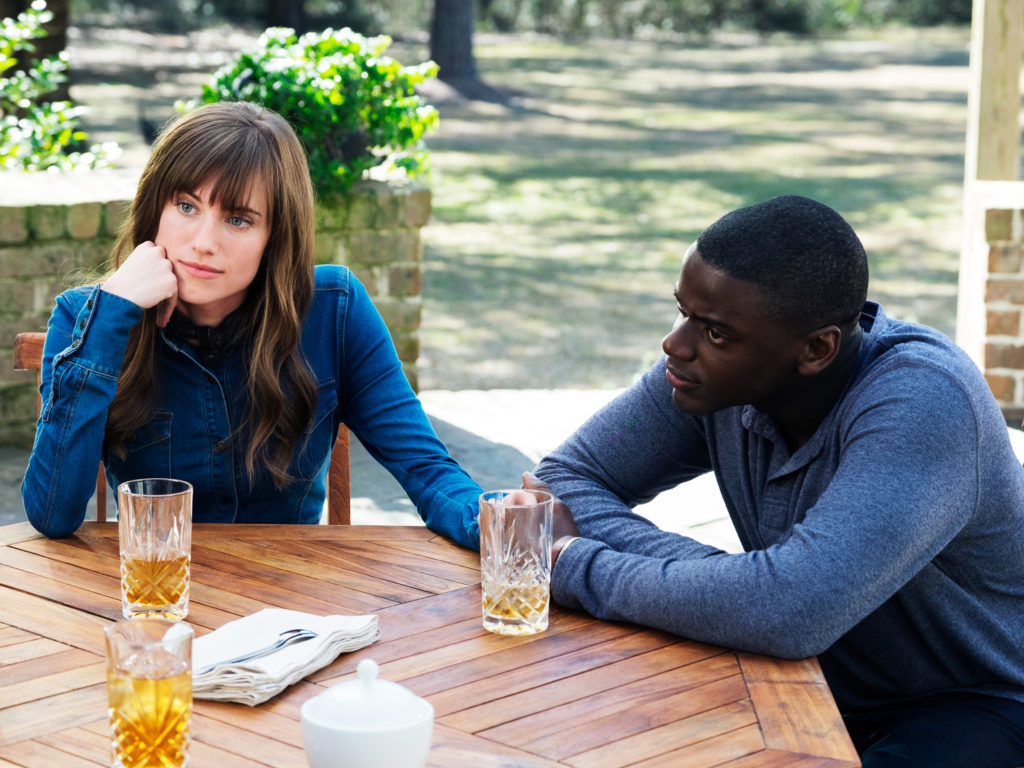 After an opening scene of a black man being abducted in an affluent suburb, we shift to a white girl named Rose taking her black boyfriend Chris home to meet her family. They turn out to be the sort of people who try to overcompensate for racism by obsessing over how cool black people are. Not only is this uncomfortable for Chris, but he also suspects something sinister is going on when he discovers that the only other black people are cheerfully subservient in an almost robotic way, and engage in many unusual behaviors as well.

It turns out that, through a combination of hypnosis and brain surgery, the family is transplanting the minds of white people into black bodies. The captives’ original minds remain, but in a dormant state. Chris’s girlfriend turns out to be in on it too, luring people in to serve as vessels. The triggered hypnosis and surgery complete with spooky music are a bit corny in their execution, but the mood is tense enough that they work anyway.

It’s a ridiculous and often comical scenario that’s also rather uncomfortable, calling out the hypocrisy of what I suppose could be called admiring racism. The family and their clients seem to believe that black people are superior in many ways, not really acknowledging how that’s also racist, especially when they have no problem with removing their agency entirely. The grandfather, who started the transplant project, is said early on to have lost to Jesse Owens in the qualifying trials for the Berlin Olympics. He’s since implanted his consciousness into a physically fit black man, and constantly admires his new body’s speed and strength. I had to wonder if there was something to the girlfriend tying back her hair as soon as she revealed herself to be evil. Maybe I’m reading too many into it, but it seemed weirdly symbolic to me, as if she’s demonstrating that she’s no longer the fun-loving girl with her hair down but a serious threat.

Stephen Root makes an appearance as a blind art dealer who wants to take over Chris’s body. I guess somebody must have liked his performance as a blind guy in O Brother, Where Art Thou?. Chris eventually does escape with help from his friend Rod, a conspiracy-minded TSA agent who actually figures out most of what’s going on, but obviously nobody believes him. The implication is that, while Chris might be safe, it’s unlikely anything will be done about the body-stealing organization. The music was also quite interesting. Two of the three songs mentioned in the credits feature running (the other is “The Time of My Life” from Dirty Dancing, which Rose listens to while searching online for NCAA prospects to seduce), and the Swahili lyrics to the main theme roughly translate as, “Listen to your ancestors, run!” I think there might be some sort of theme going on there.

11 Responses to Behold the Coagula