Tempted by the Fruit of Another Mother

It recently surfaced (or resurfaced, anyway) that Mike Pence, infamous bigoted scumbag and Vice President of the United States (in that order, I assume), refuses to dine with a woman unless his wife is present. Actually, the wording I’ve seen is that “he never eats alone with a woman other than his wife,” and I’m not entirely sure how the logistics work out. Could he eat with two women and not his wife? 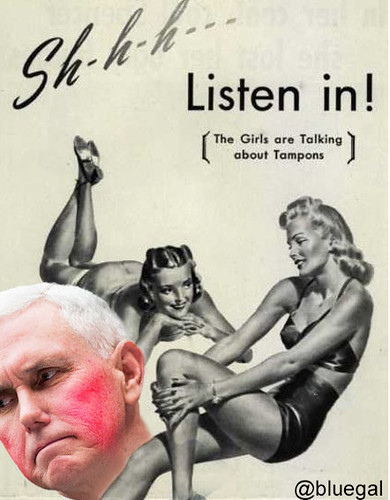 What about a man, a woman, and not his wife? Is the more significant point that his wife has to be there, or that there just has to be SOMEONE there other than that woman he’s not married to? I can tell you that I’d certainly want a third person there if I were having a meal with Mike Pence. Apparently the concept derives from an idea Billy Graham came up with, the story I’ve seen on a few pages being that he thought of it when he was in a hotel with a naked woman on his bed. I’m not sure whether this was metaphorical, a dream, or what; but one of four rules he made for his ministry back in 1949 was that he would “not travel, meet or eat alone with a woman other than my wife,” which sounds even stricter than what Pence follows. His rationale was that some evangelists “had fallen into immorality while separated from their families by travel.” Well, yeah, by choice. Why is the idea that men have no agency of their own when it comes to sexual activity still around? Remember when Pence’s boss insisted that he just automatically starts kissing attractive women? So, what, it’s like a hypnotic trance or something? Feminist Christian writer Glennon Doyle Melton sums up the connection between the President and Vice President’s attitudes quite well: “if one feels that women are so wholly and exclusively sexual that they must be avoided at all costs, and the other feels that women are so wholly sexually available that they may be grabbed freely, then those two are cut from the same misogynist cloth.” In both cases, they’re reducing women to purely sexual beings, and acting like they lack control. Pence and others who follow Graham’s rule seem to think sex is just something that happens without any choice. They both think of women as temptresses who prey on men, and that women who get raped were asking for it by being so sexy. The details differ, but not the main idea. I’ve seen people defending it by saying they’re doing what they can to protect their marriages. I have to think that, if your marriage is that weak, maybe there isn’t any particular reason to protect it. If your marriage is threatened because you look at another woman, what kind of connection do you really have with your spouse? Then again, I also have to wonder what kind of marriage you have when you call your wife “Mother.” Like, does Pence even understand how that kind of relationship works? And even if Graham’s story about the naked woman in his hotel bed was true (and how would she have gotten into the room unless he let her in?), that’s not exactly the same situation as dinner. Do Graham and Pence think they’d just automatically start screwing some woman on a table in a restaurant? You’re not going to be attracted to everyone of your preferred gender, and even if you are this doesn’t mean you have to make moves on them. Men are certainly prone to getting erections at inopportune times, but an erect penis doesn’t fall off if you don’t immediately stick it into someone. I’ve seen it pointed out several times that this approach wouldn’t be practical with women, and that it keeps women from getting ahead.

Some Christians have also pointed out that Jesus is said to have met with women alone, although maybe the rules are different if you aren’t married at all, or if you’re the Messiah.

Obviously Pence and his ilk can do whatever they want socially (and knowing how misogynistic the guy is, I’m sure it works out better for any women he’d be tempted to hang out with), but can he not even make exceptions for work? I’ve looked before at the absurdity of married men not being allowed to have female friends, although I have to wonder how someone like Pence can have any friends at all. By the way, I asked whether it was also common for attached gay men to not have male friends, and oddly the subject came up in the liner notes for the new Magnetic Fields album. Stephin Merritt says, “I often get from my mother more or less a disbelief that gay men can have friends, or male friends. And I guess it’s true that some of my friends are former boyfriends, but most of my friends are not former boyfriends.” So apparently it’s not just straight guys who are assumed to not be able to separate friendship from sexual attraction, although Pence would probably cover his ears if you brought that up around him.

4 Responses to Tempted by the Fruit of Another Mother