The Room in the Elephant

I’m not entirely sure why, but I’ve had the desire for some time to visit Lucy the Elephant, a building on the shore in Margate, New Jersey.

Beth had gone before, but I was doing something else that day. When my dad visited this past weekend, the three of us all went together. When we first entered, it looked like there were other people in our tour group, but they left after climbing the stairs. I still don’t know what was going on with that. Anyway, we watched a video and then took the steps to the howdah, where you get a good view of the surrounding area.

The main room has several artifacts associated with the elephant, and of course there’s a gift shop. Apparently elephant-shaped buildings were a thing at one point. I’m reminded of the elephant statue where Gavroche lived in Les Miserables, which wasn’t designed as a building, but was hollow. This was a real statue commissioned by Napoleon and built on the former site of the Bastille.

Napoleon’s intention was to have it made of bronze with a stairway to the top in one of its legs, but only a wood and plaster version was made. It quickly fell into disrepair, but was not demolished until 1846. 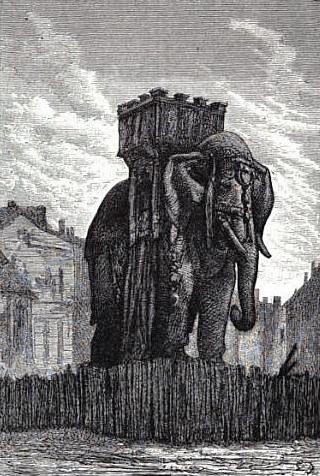 A replica of it can be seen briefly in the film version of the Les Mis musical.

The Elephant Bazaar, which later came to be known as Lucy, was built by James Lafferty as a tourist attraction in 1881, actually the same year my mom’s house was built. It’s made of cedar covered with tin, and is about sixty-five feet tall. It’s commonly thought to have been a hotel, but I don’t think it ever officially was, although there was a hotel nearby. An English doctor and his family did stay there during the summer of 1902, however, and I believe their bathtub is still inside.

It was also apparently a rooming house for a while, and served on and off as a tavern in the early twentieth century. In addition to its being a roadside attraction, Lafferty originally used the howdah as vantage point to show properties to potential customers. He had a patent to design animal-shaped buildings for seventeen years, and was responsible for two other elephant structures: the Elephantine Colossus on Coney Island and the Light of Asia (also known as Old Jumbo) in Cape May.

The former was 122 feet tall, and the latter around forty.

Both ended up being failures, with the Colossus receiving too much competition and eventually burning down in 1896, and Jumbo never making enough money to cover its cost and falling into disrepair. The Colossus was essentially a brothel for a while after tourists lost interest in the observatory and museum. Lafferty was forced to sell the Bazaar in 1887 to a Prussian immigrant named Anthony Gertzen, and it remained in his family until 1970. The official story is that his daughter-in-law Sophia first called the structure Lucy in 1901, and the name stuck. Only male Asian elephants have tusks like Lucy’s (female African elephants have them, but they also have bigger ears), but presumably due to the name, the building is referred to as female. There’s also a window in the butt, and I’m not entirely sure why, but I guess it was pretty much a necessity.

When a developer purchased the land on which Lucy stood, the Margate Civic Association raised the funds to have her moved a few blocks over and slightly more inland, to the site where she now stands. She now requires constant maintenance, but I have to say I would have liked to have stayed in a place like that back when such a thing would have been feasible.

While Lucy is the only remaining elephant building in the United States, there is one in Bangkok that’s sort of elephant-shaped, although it’s much more abstract than Lafferty’s structures. Completed in 1997, the Chang Building (or the Elephant Building, as it’s nicknamed) consists of three towers with a top floor connecting them. It’s 335 feet tall, and contains both office and residential units.

4 Responses to The Room in the Elephant