Everybody’s Doing It, the Jean-Luc Picard

We’re up to the Star Trek films using the cast of The Next Generation, where they drink Romulan Pepsi instead of Klingon Coke, and a British guy playing a French guy is the captain of the Enterprise. I think this is also when they stopped putting the numbers in the titles, which most long-running series eventually do for whatever reason. Well, okay, not Final Fantasy. Maybe that has something to do with the different cast, though. The first movie to incorporate this cast came out the same year TNG ended.

Generations – Instead of moving straight into the twenty-fourth century, we instead do a bit of a crossover. Gene Roddenberry was apparently against this idea, but he was dead by then. Since TNG begins almost a century later, however, Kirk meeting Picard pretty much required some time travel.

The movie starts with Kirk, Scotty, and Chekov (it was originally supposed to be Spock and McCoy with Kirk, but Leonard Nimoy didn’t like the script and DeForest Kelley’s health was bad) as guests on the maiden voyage of the Enterprise-B. It’s originally just supposed to be a flight around the solar system, but they’re the only ship available to answer a distress signal, which seems to happen remarkably often. They manage to save some refugees from El-Auria, a planet inhabited by beings who physically don’t look any different than humans, but live a lot longer and are really good listeners. They don’t sound all that dissimilar from Betazoids, who look pretty much just like humans but have telepathic powers. Kirk apparently dies during the mission, but actually ends up in the Nexus, a ribbon of energy transcending time and space that keeps its inhabitants in perpetual bliss, and from which the rescued El-Aurians had been separated.

Meanwhile, seventy-eight years in the future, Captain Picard’s crew is celebrating Worf’s promotion in a holodeck simulation of an old sailing ship. The holodeck is used a lot in TNG, and there have been plenty of jokes about how far-fetched a fully interactive virtual reality simulator with a multitude of different settings is. 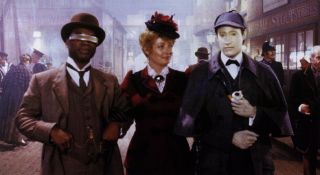 In an episode of Futurama, Kif Kroker writes a program in four million lines of BASIC. Many of the programs do seem to be pre-programmed, and for all we know there were multitudes of programmers working on them. Still a little hard to swallow, though.

The Enterprise rescues a guy in a system where the star had just been destroyed, only to later find out that he blew up the star himself and is planning to do it to another one, and one orbited by an inhabited planet. This is Dr. Tolian Soran, played by Malcolm McDowell, one of the rescued El-Aurian refugees, who is so desperate to get back to the Nexus that he’s destroying entire star systems in order to alter gravity.

Picard tries to stop him, but they both end up in the Nexus, where Picard finds himself married with many children, and his recently deceased nephew still alive as well. He meets up with Kirk, who is living in his old country home with a woman he had wanted to marry. The thing is, while they enjoy these scenarios, they’re quick to dismiss them as not real. So Soran is obsessed with getting back there, while both captains say, “Eh, not really my thing”? I guess it’s supposed to show their devotion to duty, but maybe the Nexus just isn’t as great at providing happiness as it’s made out to be. The two of them use the power of the Nexus to go back in time a bit and stop Soran, which in the process leads to Kirk dying on a collapsing bridge. A noble death, perhaps, but not a particularly grand one for such a significant character. And this was AFTER the ending was rewritten because test audiences hated the original scene, where Soran shoots him in the back. I thought the fight scene in general was pretty anticlimactic for such a team-up anyway.

There’s also a subplot about Data installing an emotion chip and becoming annoying about all the new sensations he feels, and that part is enjoyable. I also appreciated the inclusion of the back story for Whoopi Goldberg’s bartender character Guinan, who was also one of the refugees picked up by the Enterprise-B and had experienced the Nexus.

First Contact – One of the major recurring menaces in TNG and later Trek shows are the Borg, cybernetic organisms who assimilate other life forms into their collective, sharing a hive mind and incorporating the physical and mental abilities of those they assimilate. They also can adapt to weapons after a while.

They even assimilated Picard at one point, but his crew managed to rescue and restore him. This time, the Borg have invaded Earth, and Picard is ordered not to engage them. He does anyway, because you can’t have a Star Trek movie without someone disobeying regulations. The Enterprise manages to destroy the Borg Cube, but they take another ship back in time to 2063 in order to assimilate everyone on Earth. As the Enterprise is caught in the time vortex, it goes back as well. Yeah, it’s another time travel plot. I’d say they do this every four movies, but there was time travel in Generations as well. There’s also another bit of getting the old gang back together, not as pronounced as in the first two films, but still there with Worf temporarily rejoining the crew when he’d left for Deep Space Nine after the last movie. And like the third and fourth films, it’s directed by the guy who plays the first officer, in this case Jonathan Frakes. If the Borg can time travel, shouldn’t they have already assimilated, like, the entire galaxy by the twenty-fourth century? There can’t be someone caught in their vortex EVERY time. Anyway, they’re specifically trying to stop Zefram Cochrane, a character who had already appeared in an episode of the original series, from achieving warp flight. It just so happened that the Vulcans were patrolling the area, and when they detected the warp signature, they made the first officially established contact with humanity (although of course there had been other encounters before). The Borg try to prevent this by attacking the base in Montana where Cochrane is living, but the Enterprise crew intervene and try to help him out. It turns out that this historical personage is a drunk, a womanizer, and only interested in space travel to the extent that it can make him rich; and is very uncomfortable with the hero worship the people from the future are bestowing on him. Back on the Enterprise, the Borg have managed to infiltrate the ship and take over much of it. There’s a holodeck sequence in which Picard, accompanied by Cochrane’s friend Lily, runs a gangster simulation in order to kill Borg with a machine gun.

I understand the programmed story had actually appeared in a TNG episode, although I can’t say I’ve seen it. The reason the bullets work is that some of the material in the holographic simulations is actually replicated matter, and this can kill people when the safety protocols are turned off, or something like that. Lily is the one who points out how vengeful Picard is acting, despite his insistence that people in the twenty-fourth century are above such things. We also meet the Borg Queen, basically the hive mind personified, a rather disturbing woman who tries to seduce Data in order to gain access to the ship’s computers.

Commander Riker and Geordi LaForge accompany Cochrane on his historic flight, which kind of seems like cheating to me, but having to recreate a past event as best as possible in order to save the future is an old time travel tradition.

By the way, Geordi has ocular implants instead of his visor in this film, and I don’t know that it’s ever explained why. Hey, maybe the title is actually referring to him getting HIS first contacts. Okay, that joke doesn’t quite work, does it? 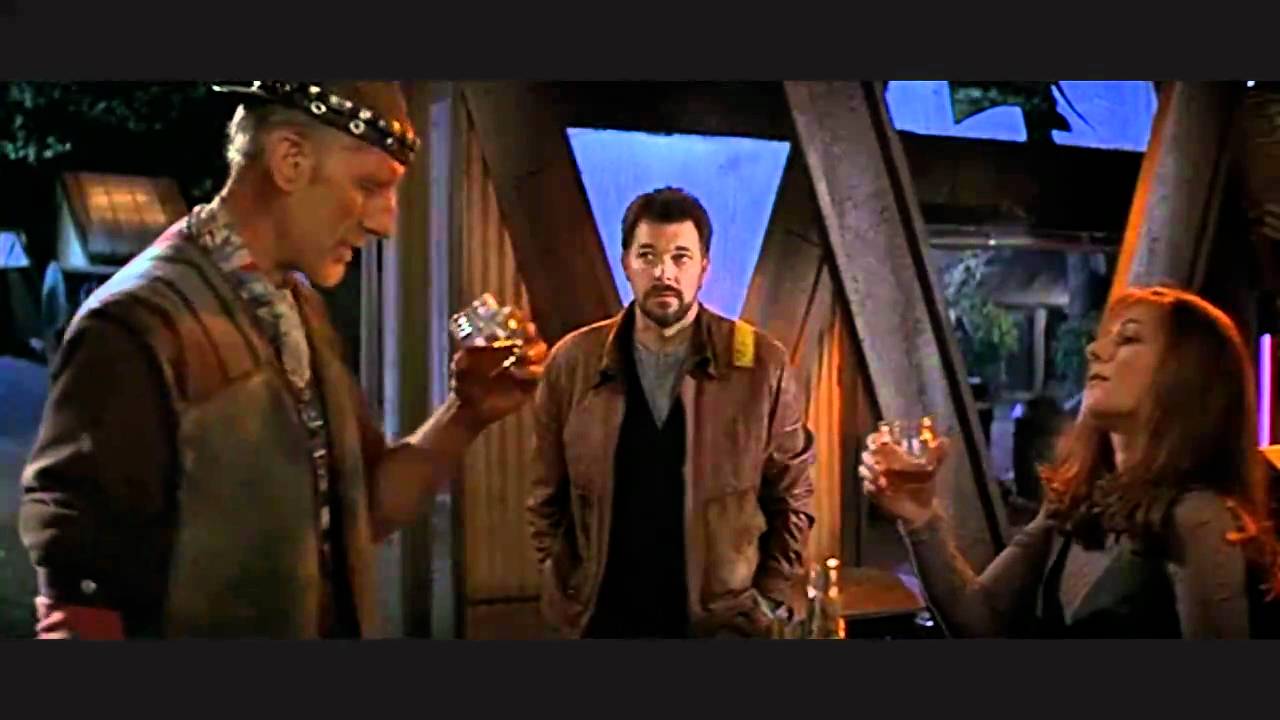 Also, Deanna Troi wears her hair down, but I don’t THINK that’s particularly significant.
The Borg on the ship are defeated as well, and we get some brief but interesting scenes of Cochrane interacting with the Vulcans.

Cochrane is apparently the first character in a Star Trek show or movie to actually use the phrase “star trek,” although I’ve seen it mentioned a few places online that Q had said “trek through the stars” in an episode prior to this. I’d also like to mention the cameo by Robert Picardo, the Emergency Medical Hologram from Voyager, which makes sense as he’s apparently a standard program. He also uses Dr. McCoy’s catchphrase, so it’s sort of a double reference. The Borg’s tactics here seem a bit haphazard for such allegedly logical beings, but it’s a solid plot and a good look at future history. I’d say they’ll have to do a retcon if the show actually lasts until 2063, but are they actually making any new Trek media other than the reboot series? I suppose Cochrane’s flight should have happened in that universe as well, though, as the timelines didn’t diverge until around when Kirk was born.

While I saw these two movies around when they came out (actually in a second-run theater at the student union for First Contact, I haven’t seen the next two at all. So I’ll be boldly going where many people have gone before, but none of those people are me.

8 Responses to Everybody’s Doing It, the Jean-Luc Picard