Yesterday was L. Frank Baum’s birthday, so I figured I should write something Oz-related, but I’ve probably covered just about every possible topic when it comes to Baum’s creation. I was thinking recently, however, about how I usually say The Patchwork Girl of Oz is my favorite book, even though I find the ending kind of disappointing. 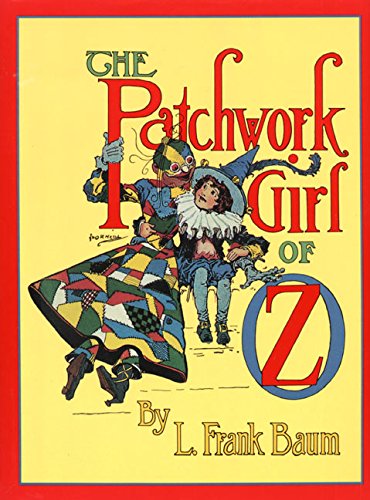 I’m going to spoil it and probably a few other Oz books as well, so maybe don’t read ahead unless you’re already familiar with them, but that’s up to you. I have to say I’ve generally never been that bothered by spoilers, I guess because the journey is more important than the destination, or something like that. I have a bad habit of reading out of order, although I do it less often now than in my younger days. Then again, it really depends on how central the spoilers are to the story. But anyway, the plot of Patchwork Girl gets underway when Dr. Pipt brings the titular character to life with a magic powder, and she accidentally knocks the Liquid of Petrifaction onto Ojo‘s Unc Nunkie and Pipt’s wife Margolotte, turning them to marble. In order to save them, Ojo sets out with the Patchwork Girl and the Glass Cat to find the five items the doctor needs to make the antidote: a six-leafed clover, the left wing of a yellow butterfly, a gill of water from a dark well, three hairs from the tip of a Woozy‘s tail, and a drop of oil from a live man’s body. With help, they obtain all the items except for the butterfly’s wing, as yellow butterflies are under the protection of the Tin Woodman, who would never let anyone harm one.

Fans have thought of possible ways this could have been solved, one of my favorites being making a butterfly out of butter, which should work in a place like Oz. But no, instead the Wizard of Oz restores the two marble people with a magic pass and word he learned from Glinda. Ozma says, “Had Ojo told me that one of the things he sought was the wing of a yellow butterfly I would have informed him, before I started out, that he could never secure it. Then you would have been saved the troubles and annoyances of your long journey.” Dorothy, who had accompanied Ojo on the second leg of his quest, replies with, “I didn’t mind the journey at all…it was fun.” Yeah, Dorothy, because you weren’t around for the part with the man-eating plants. As far as I can recall, Ojo doesn’t tell Dorothy and the Scarecrow about what he needs until the last minute, although he DOES tell the Shaggy Man who should also know Nick’s thoughts on the matter. So there was definitely some poor planning on multiple characters’ parts, but I have to say that finding four out of five ingredients and being stymied at the fifth is about the most frustrating way for such a quest to turn out. I suppose you could say that Ojo’s failure is due to his own self-defeating attitude, as he could have avoided trouble by just asking Ozma about both the butterfly wing AND the clover. On the other hand, he’s inexperienced and intimidated, so can we really blame him? The Wizard did appear about halfway through the book, but he was a minor character this time, so why should he be the one to wrap things up?

Baum was certainly no stranger to endings of this sort, where the main objective is almost completed but not quite, and someone other than the protagonists ends up saving the day. You could probably even count The Wonderful Wizard of Oz, since the Wizard turns out not to have any magic powers after all. Still, Dorothy’s companions get the symbols they want, and the Winkies get a better ruler. The ending is sort of out of nowhere in that Glinda tells Dorothy how the Silver Shoes work, but she has to get to Glinda first. In Land, the Scarecrow doesn’t get his throne back, but he and his companions are happy with the restoration of Ozma. Queen Zixi of Ix has Bud, Fluff, and Zixi recovering almost all the pieces of the wishing cloak that the queen had thrown away, but not quite. This results in their solving the problem in their own way with less powerful magic, however. I’ve seen Tin Woodman criticized for its ending, but I can’t say it bothers me. Nick no longer actually wants to marry Nimmie Amee, and there’s no reason for her to remain faithful to a man who disappeared years earlier. At least they both get closure (as does Captain Fyter), even if it’s somewhat unsettling closure. Dorothy and the Wizard has its characters almost reach the surface on their own, but not quite, then Dorothy remembers she can call on Ozma to transport them out with the Magic Belt.

The comic adaptation by Eric Shanower and Skottie Young improves this somewhat by having Dorothy mention Ozma’s watch over her earlier on; they just have to stay alive and relatively safe until the proper time. I wonder if this cop-out of sorts is part of why the next book, Road, has the Shaggy Man figure out a way to get to Oz without Ozma’s help (although it was her magic that got the adventurers to the surrounding lands to begin with). Johnny Dooit is pretty much literally a deus ex machina, but his appearance still seems a bit more satisfying than just falling back on the Belt again. Perhaps the closest to Patchwork Girl in this respect is Rinkitink, when Dorothy and the Wizard strong-arm the Nome King into giving up his prisoners instead of letting Prince Inga complete his own quest. The difference is that this wasn’t the original ending for the story (we don’t know how Baum ended it at first, although I understand there are some suggestions in the next issue of Oziana), while such wasn’t the case with Patchwork Girl.

So why do I say this book is my favorite despite the disappointing ending? I think a lot of it is just the sheer inventiveness, and the mix of old and new characters. This was Baum’s return to Oz after trying to end the series, and it seems that he pulled out all the stops. I think it’s actually the longest of Baum’s Oz books, and this is after removing a chapter. Not that longer is always better, but there’s a lot of creativity in the characters and settings encountered, as well as some quieter moments of the characters interacting. We get some historical background, with some brief mentions of Ojo and Unc Nunkie being Munchkin royalty, and the crooked magician who invented the Powder of Life becoming an actual character. Not surprisingly, there are some contradictions there, but it still shows Baum fleshing out his fairyland. Even a character from The Magical Monarch of Mo makes an appearance. Ojo himself, a sheltered and insecure boy, has some identifiable traits.

The fun-loving Scraps, vain Bungle, and amiable Woozy are nice additions to the series as well.

There’s a lot of humor, including Scraps’s nonsense verses, the corny puns on Mr. Yoop’s cage, and the Horners‘ jokes that are so bad they almost lead to war.

But this is also the book that gives us plants that try to suck the life out of the characters, and the rather unsettling incident with the disembodied voice. It also gives us the Tottenhots, based on some unfortunate racial stereotypes of the day, but even a generally progressive author like Baum was the product of his time. That’s also why the Horners have radium-lined houses and the characters complain about ragtime music.

So anyway, even if I’m not entirely happy with the ending, I very much appreciate the journey.