When Humor and Anti-Humor Collide

I found this post by Amy to be interesting, as I think we have similar senses of humor in many respects, and I’m somewhat fascinated by the concept of anti-humor. I’ve never come across the “No soap, radio!” joke in the wild, but it’s apparently well-known enough to be referenced on The Simpsons.

I have to say I’m also not so keen on the practical joke aspect, probably at least partially because I’m much more likely to be the butt of such jokes than someone on the inside. I won’t say pranks are never funny, but there can be something disturbing about them. It’s like an inside joke, but one where a whole lot of people are on the inside. Speaking of which, I occasionally come across people who make inside jokes purposely to exclude people, which seems unnecessary to me. That said, sometimes you can explain every detail of an inside joke and someone on the outside still won’t get it, because it’s really not the joke that’s funny but rather something associated with the memory. Still, there’s a difference between “you won’t get this” and “I won’t LET you get this.” On the other hand, I kind of like the idea of a joke that just makes no sense. I tend to like absurd humor, but I’ve never really been able to define what makes it work. Anyone can throw a bunch of miscellaneous words or concepts together, and they aren’t always going to be funny.

Sometimes a word just sounds funny, and it’s not entirely clear why. I watched the film The Aristocrats a few years ago, and that’s kind of a more adult version of the “no soap, radio” thing, more vulgar and less nonsensical, but still with the punchline that that doesn’t live up to the buildup. In the movie, a few people mentioned that the joke really isn’t funny with a different punchline (or at least a similar one; it’s apparently sometimes “Debonairs” or “Sophisticates”), however. So word choice is vital even when there’s no actual sense to the joke.

Looking at the Wikipedia page on anti-humor, it strikes me that several quite different things can qualify, and none of them are really the opposite of humor. One of the first jokes just about everyone learns is technically an anti-joke, the one about why the chicken crossed the road. The whole point is that you’re expecting something silly, and instead you get a straightforward answer. Of course, the joke is so familiar that it seems like people forget that. I’ve occasionally seen the setup used for a more traditionally jokey punchline, so what would that qualify as? Anti-anti-humor? 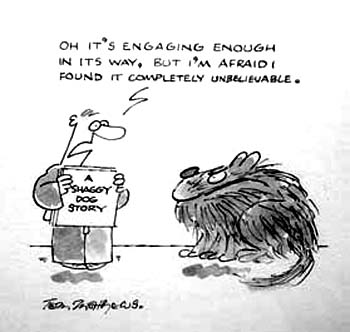 Also qualifying as anti-humor is the shaggy dog story, although even that has variations. There can be no punchline whatsoever, a nonsensical punchline, or a punchline that technically makes sense but doesn’t have a whole lot to do with the story. The story itself can be purposely boring, or it can be amusing enough on its own that you don’t really care that there’s no real point. I just learned that a ridiculous story that ends with a one-line pun is called a feghoot, after a literary creation of science fiction author Reginald Bretnor.

Anti-humor could also be something that’s funny because it’s not funny, or making a joke out of someone bungling a joke. One thing that comes to mind here is the running gag in Terry Pratchett’s Witches Abroad where Granny Weatherwax tries to tell the “alligator sandwich, and make it snappy” joke only to constantly get the wording wrong and not understand why no one finds it funny. Similarly, one of the recurring characteristics of Porkypine in Walt Kelly’s Pogo is that he’s unable to tell a joke. I’ve heard that you can’t really dissect humor, but many of these categories are based exactly on that, on taking a joke apart and seeing how it works, then putting it back together in an unusual way.

One thing I’ve noticed about how my sense of humor differs from that of many people is that I love puns, and it seems to be the norm to hate them, or at best write them off as only for kids. Maybe it’s partially because people who make puns (and I don’t exclude myself here) often give the sense that they’re really clever for having come up with them. I’ve always liked the Wogglebug‘s defense of the pun in The Marvelous Land of Oz: “[O]ur language contains many words having a double meaning; and that to pronounce a joke that allows both meanings of a certain word, proves the joker a person of culture and refinement, who has, moreover, a thorough command of the language.” Tip replies with, “I don’t believe that…anybody can make a pun,” and later remarks, “People with more or less education discovered those puns centuries ago.” L. Frank Baum used a lot of puns himself, and appears to have been well aware of the general reaction to them. I don’t think you have to be particularly smart to make a pun, but your mind does have to work in a certain way, and you need at least a fairly large vocabulary to make puns that haven’t been made numerous times in the past. I’m particularly fond of jokes based on absurdly literal interpretations of figurative speech, which my wife, for one, hates. I blame Lewis Carroll for this. Mari Ness’s review of Alice’s Adventures in Wonderland was identifiable as far as the wordplay in it being utterly hilarious to me, but just obnoxious to just about everyone else. Mind you, the book had better delivery than I did when I retold the jokes. I’ve heard that my hyper-literalism is common to people on the autistic spectrum, so maybe that’s why I was so taken by the Alice books in the first place. It’s hard to say. Even when I’m not trying to be funny, I tend to become fascinated with certain words in a way not everyone understands. I think it’s part of seeing the world from the outside, so to speak.

2 Responses to When Humor and Anti-Humor Collide