What’s the Punishment for Puns? 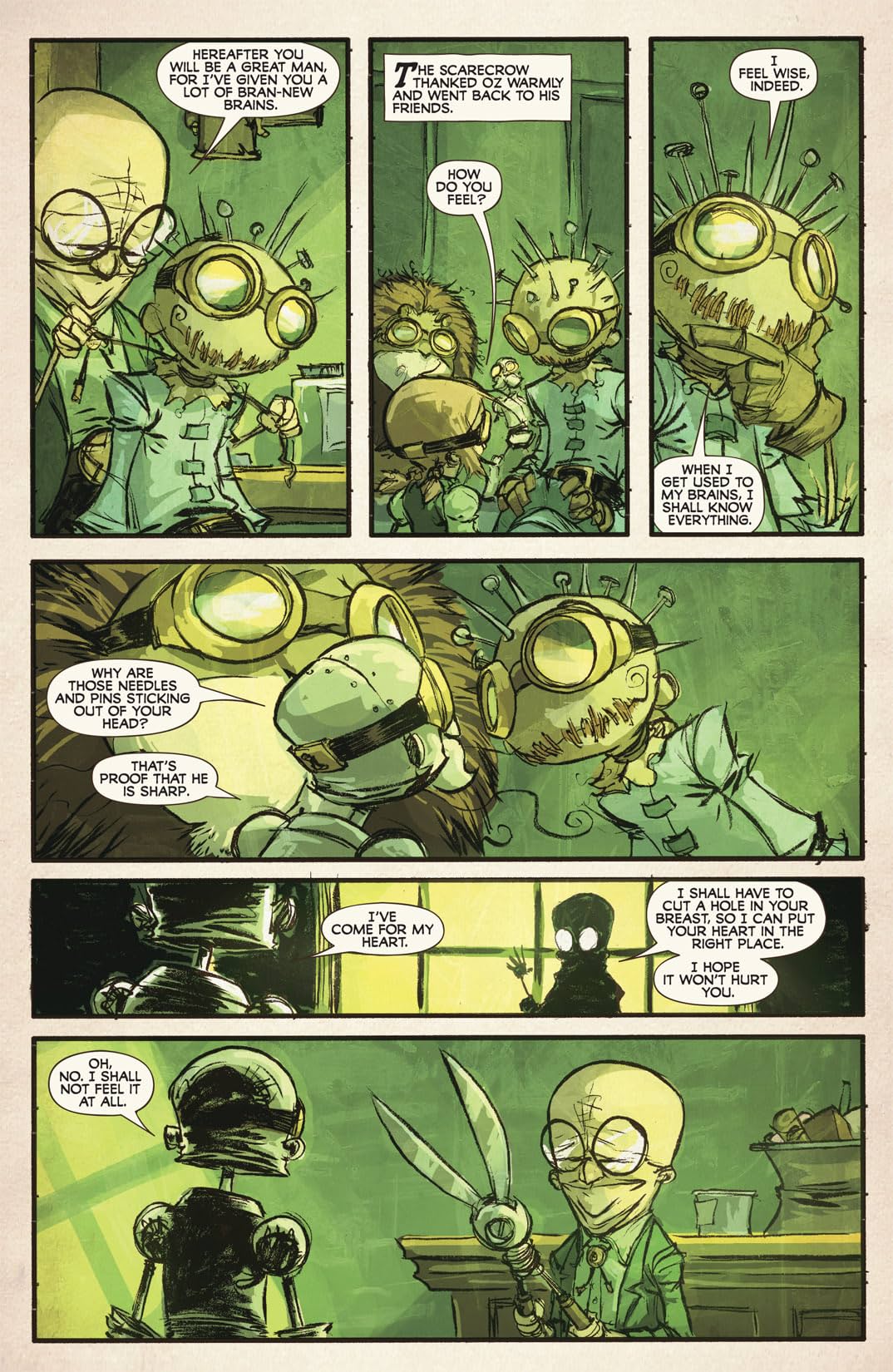 It’s well-known that L. Frank Baum was a notorious punster, and some of the authors who continued the Oz series were even worse in that respect. Puns are delivered in several different ways in the books, some being delivered intentionally the characters and others coming across as more or less built in. When Dorothy first meets the Scarecrow, he’s said to speak with a husky voice. Since the pun is delivered by the narrator, the characters apparently aren’t aware of it, but it still affects something. Later on, the Wizard of Oz gives the Scarecrow brains made of bran and pins and needles, the former of which made them “bran-new brains” and the latter made him sharp.

These appear to be intentional puns on the Wizard’s part, but the Scarecrow doesn’t get them and takes them at face value. An even more prominent intentional punster is the Wogglebug in The Marvelous Land of Oz, who makes puns so bad that Jack Pumpkinhead hides his permanent smile and the Tin Woodman essentially threatens him with his axe.

Several of the episodes in Emerald City contain constant floods of puns, the visit to Utensia being my personal favorite. Neither the utensils nor Dorothy acknowledge their exchange as containing puns; she just thinks they use “dreadful language” and “must have had very little proper training.” Basically, they’re for the readers rather than the characters. As such, it appears that punning is more or less part of the way Oz works. Just as the Scarecrow couldn’t see until he had painted eyes, his voice pretty much had to relate to a pun of which no one in-universe was aware. A girl made from a crazy quilt was likely to be crazy, even if Ojo hadn’t badly mixed her brains.

The Woozy is honest and trustworthy because he’s square. Jo Files’ books have to be red in color in order to be properly read. Panta Loon gets a high opinion of himself when he’s over-inflated.

I mentioned in an earlier article how much magic in the series is pun-based, especially in Ruth Plumly Thompson’s books. Some of them were probably intentionally made that way, but I also think wordplay is a somewhat integral part of how things work in Oz and its surrounding nations. So maybe the Wogglebug is actually on to something.

Other occasions where puns and other wordplay frequently come up are in the names of characters and places. Among others, there’s a serving maid named Jellia Jamb, a king named Evoldo who does evil, a Princess Langwidere with a languid air, living baked goods with names like Pop Over and Johnny Cake, a cook named Tom Atto, Queen Ann Soforth of Oogaboo, and so on. The only case I can think of where a name is specified to actually be a joke is with Notta Bit More in Thompson’s Cowardly Lion, and he’s not a fairyland native. Most of the time no one really comments on them, even though plenty of characters also make puns on purpose. I guess it’s possible that the names are intentional, but not necessarily intentionally FUNNY. They’re just thematically appropriate, and theme naming is apparently quite typical in Oz. Some of these jokey or eerily canny names might also be nicknames, as for instance we know Tommy Kwikstep is. Not that that’s really a pun, but it means he did receive that name because he stepped quickly, and not because of any prediction on his parents’ part.

I was thinking not too long ago about nominative determinism, and maybe that really works in Oz. Can you imagine what would have happened if Tom Atto HADN’T gone into a line of work involving food?

Actually, maybe that’s the case with Mops, the Scarecrow’s cook in Royal Book. There’s no joke to his name as far as I can tell, but it sounds like his parents would have preferred if he’d gone into custodial work.

4 Responses to What’s the Punishment for Puns?