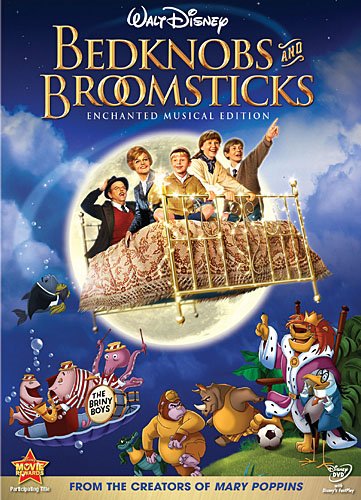 Bedknobs and Broomsticks – I seem to recall liking this movie pretty well as a kid, although even then I recognized it as kind of a second-rate Mary Poppins. It’s again set in England with precocious children, a stern caretaker who can work magic, David Tomlinson in a major role, a sequence that mixes live action with animation, and songs by the Sherman Brothers. It’s also mostly episodic and rather slow-paced, albeit considerably shorter than Mary. I understand quite a bit was cut from it to keep the film under two hours, including a few of the songs. I heard one of the excised songs, “A Step in the Right Direction,” when I worked at a toy store; it was on one of their CDs. On this viewing, I can’t say I liked it that much, although it had its moments.

The film takes place during World War II, with three children being evacuated from London to live with an eccentric old person. Yeah, that’s also how The Lion, the Witch, and the Wardrobe started, isn’t it? The kids soon find out that their reluctant caretaker, Eglantine Price (played by Angela Lansbury, who was only in her late forties at the time; apparently Disney approached Julie Andrews but she turned down the role), is studying witchcraft through a correspondence course. When the school is closed before sending her a vital spell, they travel to London to find the headmaster, using a bedknob that Miss Price enchants, and experiencing a psychedelic trip on their way there. The headmaster, Emelius Browne (played by Tomlinson), turns out to be a slick-talking but not very good street magician who copied the spells out of an old book, and definitely didn’t expect them to work. He was unable to send the last spell because his copy of the book is incomplete, so they search the market at Portobello Road for it, leading to a really long song-and-dance sequence. They find out that the rest of the book is in the possession of a shady old collector known simply as the Bookman, and the spell isn’t in his part either. Their main clue is that the medallion worn by the sorcerer Astoroth (presumably named after the Grand Duke and Treasurer of Hell, who in turn got his name from a Phoenician goddess), which had the words of the spell on it, was taken by animals to which he had given human intelligence. 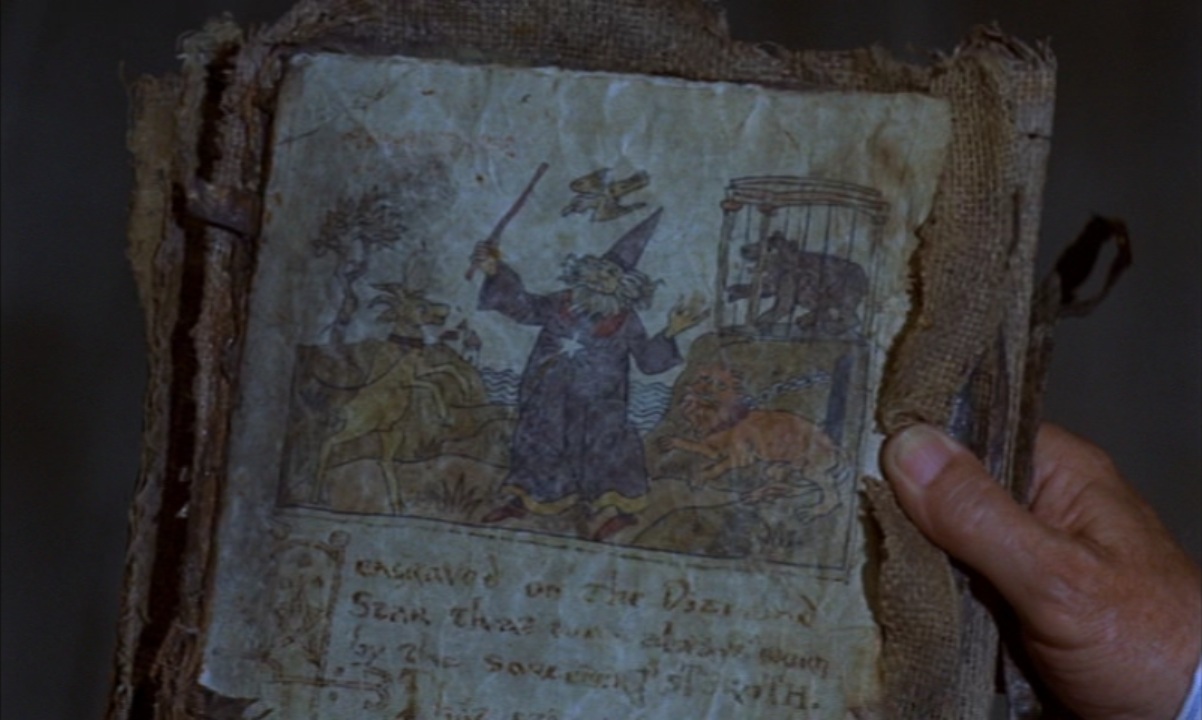 For some reason, nobody appears particularly interested in the rest of the book, even though there are quite a few pages there. Anyway, there appears to be a link between these animals and a picture book that Paul, the youngest child, finds in the abandoned house where Mr. Browne is squatting, and this leads to the animated part. There’s another song-and-dance sequence, this time in an undersea grotto filled with animated fish, where for some reason no one has any problem breathing or singing.

On the island itself, the visitors find that the medallion is in the possession of the king, a bad-tempered lion who fancies himself a great soccer player. Mr. Browne agrees to referee a soccer match, and it’s not too surprising that the next fully animated feature released after this was Robin Hood, as both the drawing and animation styles (very much not up to earlier Disney standards) and the slapstick action of the match are pretty similar to that film.

Mr. Browne manages to steal the medallion, but it doesn’t survive the trip back to England, Miss Price guessing that it didn’t survive the transfer between worlds. Fortunately but frustratingly, the words are also in Paul’s book, making the whole last part of the movie moot.

The characters are then captured by a Nazi scouting party, because isn’t what you’d expect so soon after a bunch of cartoon animals playing soccer? Yeah, I know it was already established as taking place in wartime, and these are some pretty bumbling Nazis, but it’s still a rather dark turn.

Miss Price uses the spell she just learned to animate a bunch of suits of armor to scare off the invaders, and then decides to give up witchcraft. Mr. Browne has developed feelings for her and the children, but joins the army instead of moving in with them. Also perhaps worthy of note is that Miss Price’s skittish cat, Cosmic Creepers, shows up quite often to react to things; but nobody seems to particularly care about him. Poor cranky kitty.

While I probably would have guessed that this movie was based on a book, I wasn’t actually aware of which book until fairly recently. It’s actually two books, The Magic Bed-Knob and Bonfires and Broomsticks, now usually published in one volume as Bed-Knob and Broomstick.

The author, Mary Norton, is best known for The Borrowers, which I haven’t read. The combined volume is a quick read that I completed in e-book form on a bus ride yesterday. So how do they compare to the movie? They somehow manage to hit a lot of the same points and even some of the same lines while telling a completely different story overall. There are no anthropomorphic animals, no search for any missing spells, and while it still takes place during WWII and there’s a brief thought on whether magic could aid in the fight, no Nazis.

That didn’t stop someone from releasing an edition with this cover, though. I’ve never been fond of movie tie-in covers for books.
What it does have is time travel, specifically in the second book. The character on whom Emelius Browne is based, Emelius Jones, is a necromancer’s apprentice in the seventeenth century who has just recently learned that none of his master’s magic is real. He visits the future with the children, and he and Miss Price fall in love. When he returns to his own time, he’s almost burned at the stake for practicing sorcery after surviving the Great Fire of London (I thought England hanged witches and burning was more of a continental thing, but whatever), but Miss Price uses her animation spell to save him, and the two of them settle down in that time. What’s kind of weird is that Emelius, after learning that magic didn’t work, doesn’t seem particularly surprised at seeing some that DOES work soon after that. But maybe after the time travel, he’s inclined to believe just about anything. Mr. Browne in the movie, who didn’t do any time traveling, has a reaction to actual magic that changes over time–at first he doesn’t believe it, then he wants to exploit it, and finally comes around to being able to do it himself. One of the more interesting exchanges in the book is when the children think it’s unfair that Miss Price is using magic to grow flowers for prizes, and she argues that other people can buy better soil, fertilizer, and such. Later on, however, she comes around to agreeing more with the kids. I can see both sides of it.

1 Response to Magic, She Wrote