Everybody Now Engage, Yeah You Know It’s All the Rage

Here are my thoughts on the ninth and tenth Star Trek films, replete with spoilers. 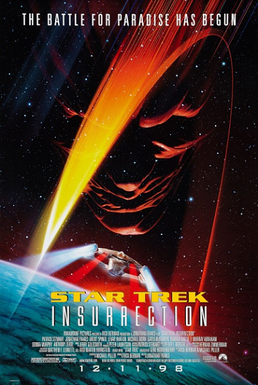 Insurrection – The plot of this one is centered around a planet where some kind of weird radiation concentrated in its rings keeps the inhabitants eternally young. These people, the Ba’ku, were a technologically advanced group who came to this planet and decided to switch to a back-to-nature approach to life.

Starfleet has made an alliance with a people known as the Son’a, wanting to find a way to extract the radiation and use it elsewhere. Why couldn’t they just relocate to that planet? Well, most beings don’t want to live in the middle of the Briar Patch, a region of space where subspace communications and warp drive are hampered. The Enterprise crew finds out about this because Data is working with the scouting team on the planet, and the leader Admiral Dougherty wants his schematics when he malfunctions, but tries to shoo off the Enterprise after this. Captain Picard is suspicious of this and checks out the planet, where he develops a fondness for the Ba’ku, and particularly for a woman named Anij.

Exposure to the radiation has healing effects on the crew, with Picard once again being able to distinguish slightly different sound frequencies, Geordi becoming able to see, and Commander Riker and Deanna Troi rekindling their romance. They find out that the Son’a are former Ba’ku who objected to their way of life and left the planet, but were still obsessed with retaining their youth, to the point that they subject themselves to bizarre surgeries.

The satire here is not at all subtle.
Their plan is, with the Federation’s help, to forcibly relocate the Ba’ku by fooling them with holographic technology, then harness the youth-giving radiation. Whether this would even be possible is never really addressed; the Son’a are so fanatical as to clearly be in the wrong, and there’s no discussion of whether their plan might work on a smaller level if they were to negotiate some kind of agreement with the Ba’ku. What happens instead is that pretty much everyone, including the other Son’a, eventually realize how far gone their leader Ru’afo is and turn against them, the remaining Son’a then returning to the planet to rejoin their old families. Not a bad story overall, and I quite enjoyed Picard and Data performing Gilbert and Sullivan, but I don’t think the ramifications of seeming immortality were fully addressed. But they never really are, are they?

Nemesis – This was the last film starring the Next Generation cast, and the last to take place in the original Trek universe instead of the slightly altered one of next three movies. It wasn’t very well-received, either, which could help to explain why it was the last. The story involves a clone of Picard made by the Romulans to infiltrate the Federation, who then decided not to use him and instead kept him as a slave on Remus, the planet next to Romulus. From what I’ve read, it was established early on that Remus existed, but nothing was really done with it for some time. Eventually, it was revealed that its natives were a low class who were renowned warriors but not at all respected, lived in the dark, mostly worked in mines for the Romulans, and looked like Nosferatu.

I assume the Romulans don’t call THEMSELVES Romulans, and the names were an in-joke by humans due to their resemblance to the Roman Empire. The Picard clone, Shinzon, managed to work his way up to leader of the Remans, then took over as Praetor of the Romulan Senate. As a villain, Shinzon is kind of all over the place. He plants the head of the android B-4, a prototype to Data, as bait for the crew so he can obtain classified information.

He plans to use radiation to kill life on Earth, but stops to take breaks from his plot to chat with Picard and mind-rape Troi through his Reman viceroy’s telepathy. I suppose it kind of fits his character, but he comes across as just generally evil for no real reason. The movie tries to emphasize his similarities to Picard, comparing them to B-4 and Data, but I don’t know that it really works. There are some interesting touches in the ensuing battle scenes, sort of desperation attacks on the Enterprise crew’s part. After their weapons don’t harm Shinzon’s ship, Picard just has the Enterprise straight-up ram into it. Data is simply shot from one ship to another when the transporters aren’t working, and Picard uses a pipe on the wall as a weapon. I hadn’t realized before that Data dies in this one, although he transfers his katra to Dr. McCoy before he does. No, wait, I mean he implants his memories into B-4. There’s kind of a nice echo of The Undiscovered Country in that that was about making peace with the Klingons, while this one ends with the prospect of peace with the Romulans. We don’t know that it ever actually happens, however, especially with the destruction of Romulus as mentioned in the next movie. This film also shows us the marriage of Riker and Troi, where guests include Guinan and Wesley Crusher.

So that’s it for Star Trek movies, at least so far. If you missed some of the others, here are some links:
The Motion Picture and II
III and IV
V and VI
VII and VIII
The 2009 film
Into Darkness
Beyond

4 Responses to Everybody Now Engage, Yeah You Know It’s All the Rage