When the Volcano Blow

I wrote last week about Dorothy’s tornado and other natural disasters that opened the way to Oz or the surrounding fairylands, and this time I’m going to look at ones within fairyland itself. We don’t really hear of many bad storms in Oz, and the cyclone didn’t do any damage there that we can see (well, except to the Wicked Witch of the East), so it might be protected from such weather in some way. There is a mention in Phyllis Ann Karr’s Maybe the Miffin of Whirligig Winds, tiny tornadoes that cause very little harm except to small creatures, which are speculated to be offshoots of Dorothy’s twister. Then there are the Trade Winds, which are funnel-shaped and carry off just about anything, leaving other things in their place.

That’s how this cow ended up with a hat. That’s apparently not normal for Oz, even though it wouldn’t be that strange if it were.
Oz does have the occasional thunderstorm, which for some reason seem to be most prominent in the Ruth Plumly Thompson books. Some places have localized weather that can’t be found even in nearby areas. Mo, which is across the desert from Oz, has lemonade rain and popcorn snow. The underground Torpedo Town has rain in the form of small torpedoes. 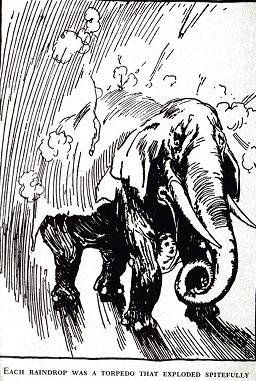 Another subterranean place, which is actually called Subterranea, has occasional sunlight rains that are harmful to the inhabitants. Davy Jones is buried by a blizzard of talcum powder in Soap Hollow. In UpTown, located high in the Gillikin Mountains, storms move upwards; and it’s typical for the people to jump into their umbrellas to protect themselves. Captain Salt in Oz has the Crescent Moon caught in a severe storm on the Nonestic Ocean, some way from Oz proper.

Volcanoes also show up a few times in the series. I mention two of them in this post on fire beings: Lavaland or Salamander Island from Captain Salt, and the one in Ev from Grampa. The latter is controlled by Blazes, an enormous man made of fire described as twice the size of the inhabitants of Fire Island and with a “cruel and ugly” face. His appearance is quite brief, consisting of his dropping a forty-foot poker into a lake of magma in order to cause an eruption so Grampa and company can return to the surface.

I believe this is the only picture of him, so we can’t really judge his face for ourselves.
They are, fortunately, protected from the incredible heat with a magic elixir. Lucky Bucky places another volcano in the Nonestic, this time a much tamer one that’s used as a bakery.

In addition to providing heat, the volcano can produce foodstuffs that its bakers mention. The bakers are known as biscuit shooters due to their skill for launching hard biscuits with paddles to drive off enemies.

They successfully defend against a pirate raid, and make the pirates into bakers themselves.

Later in the book, when a painted image of Mombi hides in the volcano, the Wizard of Oz brings it to Lake Quad. There’s no indication that he asked the bakers for their permission to do this, but they don’t seem too upset by it. Then again, I’m not sure I’d want to speak out against someone who magically transported my home either. There’s also Volcano Mountain in Greg Hunter’s Betsy Bobbin, located in the Winkie Country on the edge of the Deadly Desert. Inside it is Silk City, home to the Silkies, who collected and worked silk supplied by a giant silkworm sitting in an opening, not allowing anyone in or out. It was also the home of Betsy’s parents, Robert and Belle Bobbin, who were dropped into Volcano Mountain by a tornado that blew their home from Oklahoma. The Silkies and the Bobbins packed the excess silk provided by the worm into the veins of the volcano, which eventually erupted, covering the surrounding land with silk and breaking the silkworm into pieces, each of which became a small silkworm. They then used this material to rebuild their city outside the mountain.

I mentioned the seaquake from Gnome King in last week’s post, and there’s a geyser in Eric Shanower’s Salt Sorcerer. Cork Mountain is located on top of a hot spring, and its ruler Queen Zyzzwyzz has her Geyser Gremlins occasionally release the pressure in order to avoid destroying the mountain, causing excessive rain in the area.

When Kabumpo and Aa the Salt Sorcerer take her Crystal Corkscrew and use it to remove the glowing cork at the bottom of a pit, it destroys the mountain, but everyone apparently survives. Zyzzwyzz herself is restored to her original form from before she started bathing daily in a mud pit, which in typical Ozian fashion also gives her a better attitude.

It also releases the Water Genie who was sleeping under the mountain.

And while they are perhaps not exactly natural disasters, I should probably mention the Ripple Land between Ev and Boboland where the land continually rises and falls in waves, making mountains into valleys and vice versa. Similarly, the Rolling Country of Ev has earth that behaves like ocean water, breaking in waves and releasing sticks and stones.

1 Response to When the Volcano Blow