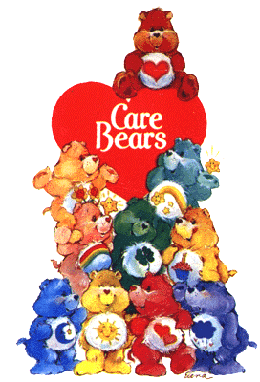 The Care Bears were a line of characters originally created for greeting cards, which was kind of a thing at the time. That also happened with Strawberry Shortcake, the Popples, and Rainbow Brite, among others. They’re sort of teddy bears who are also guardian angels, living in the clouds and monitoring the Earth for people who need caring in their lives. They seem to work exclusively with children, as they were at the height of their popularity during the Reagan administration and never did anything about his uncaring policies. They came in different colors, and each character had its own symbol on its belly. These symbols reflected their personalities, but also produced useful objects, and they could all get together to perform their ultimate move, the Care Bear Stare, where they emitted light from their bellies to form a kind of caring ray. It didn’t involve their eyes, but I guess the rhyme was more important than the accuracy. I never had any of them, and not just because they were seen more as girls’ toys, because I didn’t have any of the popular boys’ toys either. I was somewhat intrigued by the Transformers, especially the Dinobots, but I didn’t get any of them. Anyway, the Bears were popular enough to receive three theatrically released movies, and Beth and I recently watched the first two, from 1985 and 1986.

The Care Bears Movie – We’d actually both seen this one before, more than once in Beth’s case. It performed better in theaters than its animated competitor, Disney’s The Black Cauldron, but that was hardly one of Disney’s better efforts anyway. And for the record, I saw The Black Cauldron at the theater. There was some actual celebrity talent involved with the Care Bears, with Mickey Rooney as the narrator, and Carole King and John Sebastian writing (and sometimes singing) the songs. They were good songs, too; these writers didn’t phone it in because it was a film about toy bears. The animation, which was outsourced by Canadian production company Nelvana, wasn’t super high-quality but it worked, with the Care Bears moving like stuffed toys. The plot focuses on the Bears helping three kids, two orphans who are able to care again after a trip to Care-a-Lot, and a clumsy magician’s assistant named Nicholas. I was a depressed child, so why didn’t any magical teddy bears come to help me? I would have loved visiting a country in the clouds!

Anyway, the first two kids have their problems solved rather quickly, but Nicholas falls under the influence of an evil spirit inside a book. Keeping in mind that the intended audience was young kids, I have to suspect the evil book might have been genuinely scary for some of them.

Nicholas works evil spells to rid the world of caring, or at least that’s what we’re told. It’s not like we ever see much of the world beyond the amusement park where he lives and works. The two children and two of the Bears are accidentally transported to a place called the Forest of Feelings, home to the Care Bear Cousins.

These were a spin-off of the toy line for animals other than bears, although they all still had the same basic teddy bear body. 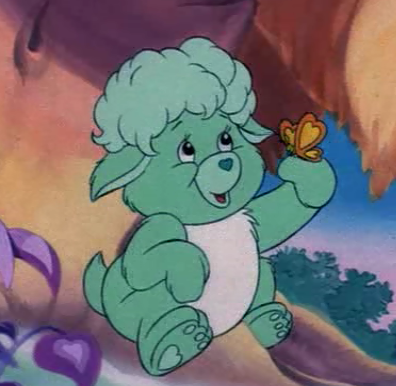 We then find out that Nicholas grew up to be the narrator, who runs an orphanage in the framing story. While I think all of the characters who had been released as toys at the time appeared, some were largely in the background. The most prominent ones tended to be Tenderheart, Friend, Secret, Grumpy (who did most of the mechanical work), and Brave Heart Lion, with Grams Bear and her baby charges Hugs and Tugs playing a significant role near the beginning. I guess I kind of feel that, with movies based on properties that already have a lot of characters, children are all going to want to see their favorites. If yours was Champ Bear, for instance, he was there, but not featured all that much.

The Care Bears Movie II: A New Generation – Despite the success of the first movie, this one seems rather more half-hearted (and as far as I know, there’s no Half Heart Bear). The songs aren’t even very good this time; King and Sebastian did not return as writers, and the ones here are rather more cloying. In terms of plot, it’s a prequel, looking back at the Care Bears’ first Caring Mission. Exactly how long ago this is supposed to take place, I don’t know. Since most of the first one was also a flashback and its child characters were adults in the framing story, the Bears must have been active for some time. Attempts to make sense of the timeline are probably doomed to failure anyway, as this movie totally destroys any continuity the first one established. Remember how the Care Bear Cousins received their tummy symbols at the end of that film? Well, here they get them as babies, and they grow up with the Care Bears.

I’m now imagining some kind of midquel where they somehow lose the symbols and have their memories wiped or something. Also, isn’t Grams Bear older than the others? Where is she during this story? The villain here is named Dark Heart, and he’s a shapeshifter who has no known back story.

From the beginning, he’s harassing the Care Bears and Cousins, who are then under the leadership of True Heart Bear and Noble Heart Horse.

The latter really doesn’t look much like a horse, suffering more from the basic teddy bear body than the other Cousins. They escape from him and bring up the children in the Kingdom of Caring. In many respects, the plot is derivative of the first, right down to the Bears being able to assist two human siblings right away, but another child being corrupted by evil until the end. 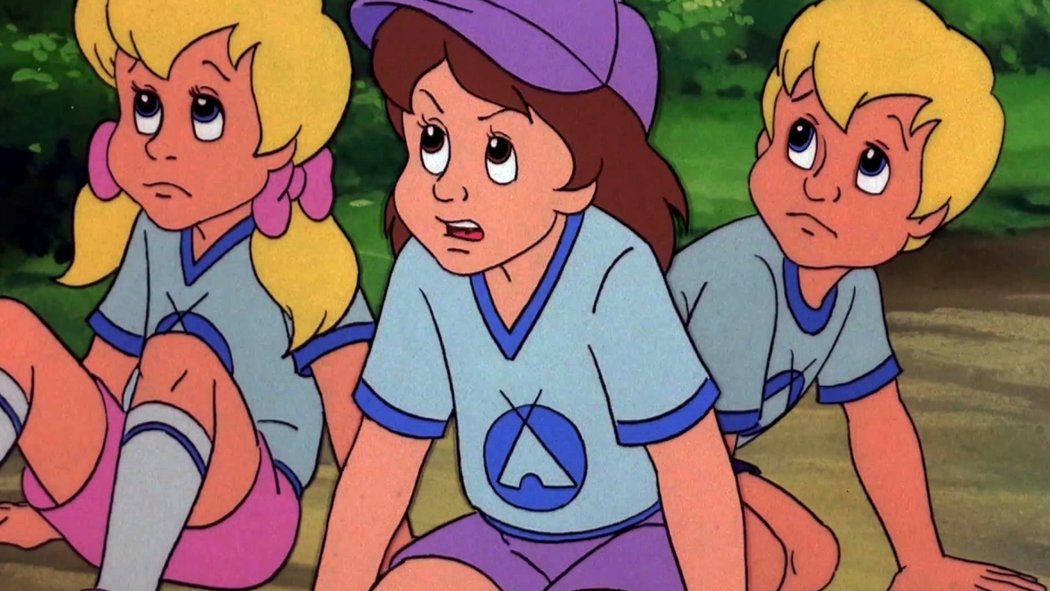 This time, they’re staying at a summer camp, which I know from my experience in YMCA day camp to be a good way to lose faith in humanity. Some boy known simply as the Camp Champ keeps bullying the three of them, and for some reason there don’t appear to be any counselors they can complain to. They must all be having sex and letting Jason Voorhees drown. For that matter, I don’t think there are any human adults in this movie. At least the last one had the magician, although even that was weird because Nicholas apparently lived with him, but didn’t seem to view him as a father figure. This time, the corrupted child is a girl named Christy, who has Dark Heart grant her the ability to be the best at every camp activity in exchange for a favor to be named later. As pretty much every page I’ve looked at points out, it’s a loose retelling of the Faust legend, although Faust got a lot more out of his deal. She’s forced to help Dark Heart capture the Care Bears, but not only is Christy eventually redeemed by the power of caring, but so is Dark Heart, who learns about selflessness when Christy saves him from drowning (not that he presumably couldn’t have just turned into a fish or something). The Care Bears address the audience Peter Pan style to get them to help in reviving Christy, which makes even less sense when you remember this is supposed to be a flashback. 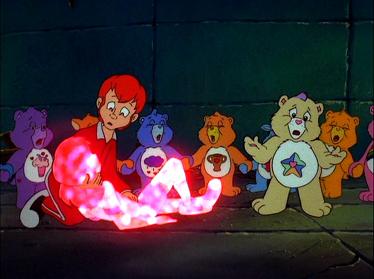 I guess they didn’t expect their intended viewers to notice, and they might have been right. I’m now a little bit outside the age range they were marketing these toys to, in case you didn’t know.

The third and final theatrical Care Bears movie was an adaptation of Alice in Wonderland that came out in 1987. I haven’t seen this one, and I don’t know if I will; I’ll probably leave it up to Beth. The Care Bear toy line has been relaunched several times since then, and there have been other animated series and direct-to-video movies in that time.