Tales of the Peculiar, by Ransom Riggs – A tie-in to the Miss Peregrine’s Peculiar Children series that’s actually mentioned in those books, this is presented as a series of old fairy tales. There aren’t any photographs in this volume, but each story is accompanied by a woodcut-style illustration by Andrew Davidson. They provide sort of a history for Riggs’s Peculiar world, combining its history with in-universe fiction. Many of them are presented as cautionary tales about misuse or overuse of Peculiar powers. A girl who can remove nightmares learns that that’s not always a good idea, and a boy who can control the tides reveals his powers to people who take advantage of it. One amusingly macabre story has a village of people who can regrow their limbs working out a mutual agreement with cannibals, only to get too greedy and start offering body parts they CAN’T regrow in order to get richer. There’s a tale explaining the origins of ymbrynes, and another one about how the pigeons of London fought against and then came to an understanding with humans. It’s a good read, although you’d probably want to read the main series first if you haven’t yet. 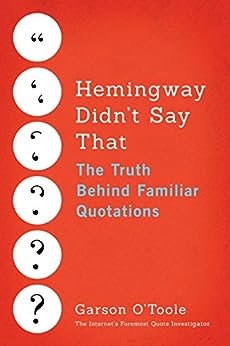 Hemingway Didn’t Say That: The Truth Behind Familiar Quotations, by Garson O’Toole – I was able to download a copy of this for free with Amazon Prime. It delves into the origins of famous quotations, many of which are frequently attributed to famous people who either didn’t say them at all or expressed similar sentiments but in different words. It appears that it’s not getting very good reviews on Goodreads because the writing is kind of dry; it could easily have been presented in a more entertaining fashion. That said, it was quite interesting finding out how some of these sayings originated, and how they changed over time. It’s probably best read a bit at a time.

Norse Mythology, by Neil Gaiman – Gaiman gives a pretty straight retelling of some of the most famous Norse myths. There’s no real hook to them like in the Joanne Harris book I read a few months ago that retold them from Loki’s point of view, but it’s still entertaining. Part of that is because the old myths were already frequently amusing, often employing dark comedy. Still, I noticed what I thought was a more modern touch in some parts, as with this paragraph from “Freya’s Unusual Wedding”: “There were things Thor did when something went wrong. The first thing he did was ask himself if what had happened was Loki’s fault. Thor pondered. He did not believe that even Loki would have dared to steal his hammer. So he did the next thing he did when something went wrong, and he went to ask Loki for advice.” Gaiman’s take on Thor kind of seems like an ultra-violent Winnie-the-Pooh, if that makes any sense; his thinking is quite simple and single-minded. While I was familiar with most of these tales, I don’t think I’d read the one about the mead of poetry, which involves a god made of saliva being distilled by dwarves.

1 Response to Myths and Misattributions