Animal Crossing: New Leaf – Beth and I both used to play Animal Crossing for the GameCube quite a bit back in the day, but I hadn’t checked out any of the newer iterations. After seeing quite a bit about it on the Internet, I had the desire to get back into it, so I purchased New Leaf. It’s the Welcome Amiibo edition even though I don’t have any Amiibos, because that’s the one that’s currently for sale. I believe all versions of this game have the same basic structure (well, okay, Happy Home Designer is a little different). You’re a human who moves into a small seaside forest town of anthropomorphic animals. There’s no ultimate goal, but there’s a lot of collecting to do, and you can socialize with the different townsfolk and participate in contests. One of the main differences in this game from earlier ones is that you’re the mayor. The official back story is that you’re mistaken for someone else who was supposed to be mayor, who later writes you a letter saying you might as well keep the job. There’s none of that mess with elections or anything. Before you can actually do anything official, you have to get a one hundred percent approval rating, but that’s a lot easier than it sounds.

You can then announce public works projects (some of which are facilities the town started out with in other versions) and ordinances, although it costs money to do so. I currently have a fundraiser started for a well, and while I have received some anonymous contributions, it looks like I’m going to have to donate most of the money myself. This is while I’m also trying to get the money to to pay off our old pal Tom Nook for the house.

It’s not that hard to make money by selling things like fruit and fish, however, and it’s not like there’s any real pressure on you to pay at a specific time. One of the advantages to this series is that it’s very leisurely, the most tense thing that can happen being a bee attack. Even this does only cosmetic damage that can be removed by restarting, but it certainly SOUNDS tense, and everyone else in town mentions it.

You also can leave and come back basically whenever you like, although spending TOO much time away can cause problems. The game clock syncs with real-world time, which can be frustrating sometimes as businesses close at night and a lot of people have work or school during the day. I suppose you could alter the game clock, but that seems like cheating, even though I don’t think Mr. Resetti monitors this game unless you put him in, and I haven’t had that option yet.

I’ve also noticed a few inside jokes from the characters, like Rover mentioning at the beginning that he hasn’t taken the train since around 2002, the reaction to catching a sea bass being, “What? You again?”, and Blathers stopping himself before going off on tangents. I’m honestly a little sorry about that last one, as he’s one of my favorite characters. 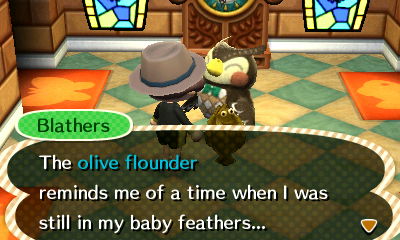 My current neighbors include a deer, a gazelle, a monkey, a duck, two cats, a horse, and two frogs. What’s weird is that you can catch frogs even though some intelligent ones live in town. I guess it’s best not to think about it. There are several different personalities the animals can have, any their dialogue can vary quite a bit.