The Song of Wirrun, by Patricia Wrightson – Paul Dana recommended this trilogy of books based on Australian mythology: The Ice Is Coming, The Dark Bright Water, and Behind the Wind. I have a passion for mythology, but I haven’t really looked that closely into native Australian lore, so quite a bit of it was new to me. The series focuses on the aboriginal hero Wirrun, who saves the country a few times. The Yunggamurra, the Mimi, and the Bunyip all feature in these stories. I read it a bit gradually, so I don’t remember all of the details that well. While Wirrun does face evil, a lot of it consists of the characters traveling, making for a slow pace at times. Still, I think this fits with the general style. 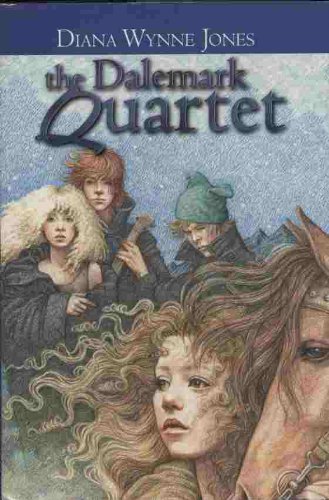 The Dalemark Quartet, by Diana Wynne Jones – If I don’t remember the Wirrun books that well, this series is even worse, as I read Cart and Cwidder and Drowned Ammet years ago, and only recently got around to The Spellcoats and The Crown of Dalemark. The first three are largely self-contained, with completely different characters and situations, but they all come together for the last one. The world is a pre-industrial high fantasy sort of place, lacking the more modern elements of many of Jones’s fantasies. There is time travel in Crown, though. Enjoyable enough reads, but they didn’t really hold my interest as well as a lot of the author’s work.

Mickey and Donald: The Search for the Zodiac Stone, by Bruno Sarda, Massimo De Vita, and Franco Valussi – IDW and ComiXology have been releasing collected editions of Disney comics, some foreign and others more obscure American tales. Earlier this year, they put out a translated version of a very ambitious 1990 Italian story from the Topolino (the Italian name for Mickey Mouse) magazine that made use of many different aspects of the Disney universe, and encompasses several different types of storytelling. Mickey is seeking the twelve lost Zodiac Stones for two archaeologist friends of his, and Scrooge McDuck is also interested in them due to their supposed ability to tell the future. In twelve different chapters, Mickey and Donald Duck seek out the Stones, with help from Goofy, Donald’s nephews, and others. Gladstone Gander, Grandma Duck, Gus Goose, Minnie, and Pluto all play significant roles at various times. In one story, Donald takes on the role of the Duck Avenger, his superhero alter-ego known as Paperinik (a combination of his Italian name Paperino and an anti-hero called Diabolik) in Italy. In another, he ends up on a planet obsessed with fashion. Scrooge encounters a ghost in Scotland, Goofy takes the place of a rich lookalike in Paris and tells the story of his ancestor Goofaloo Bill, and a quiet story has Huey, Dewey, and Louie find one of the stones on Grandma’s farm. Pete and the Phantom Blot team up to try to steal the stones, and Magica de Spell features in one tale. There are a lot of in-jokes as well, with the references to Darkwing Duck’s St. Canard presumably either added in by a later editor or a translator, since the series didn’t start until 1991. While I know Don Rosa thinks of the Duck universe as separate from the rest of Disney’s properties, I do like the idea of a shared universe between different media featuring these characters, even if that obviously means some inconsistencies. It seems like American Disney comics are now starting to incorporate more popular elements from European stories that were either unused or underused in traditional tales, like the Duck Avenger and Donald’s beatnik cousin Fethry.

Waiting for the Galactic Bus, by Parke Godwin – A humorous take on the Chariots of the Gods idea that gods are actually advanced aliens, this credits human evolution and development to two aliens who are stranded on the primitive Earth as a joke, then not rescued for millennia because their companions can’t remember where they were. They pass time by speeding up the advancement of the local apes, and end up being thought of as God and Satan despite not really promoting those identifications. Barion runs Topside and Coyul Below Stairs, two realms of human post-life existence, and interact quite frequently with such historical figures as Jesus (who goes by Yeshua and tends not to be accepted by Christians expecting a tall white guy), Judas Iscariot, St. Augustine, and John Wilkes Booth. Much of the plot involves Barion and Coyul’s attempts to break up white nationalist Roy Stride and his naive but actually fairly intelligent girlfriend Charity Stovall, fearing that any offspring might bring on the apocalypse. To this end, Coyul recruits the help of actors to create a scenario in which Roy succeeds in his takeover attempt, and I don’t think this part works quite as well as when Godwin focuses on aliens and historical figures, but there’s definitely a message in it that’s still quite valid today. 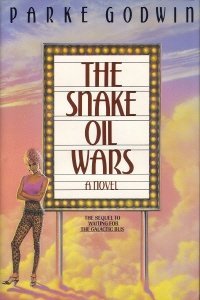 The Snake Oil Wars, by Parke Godwin – The follow-up to Bus has Coyul taking over Topside after Barion is banished, and dealing with another bigoted American fundamentalist. Godwin tries to make Lance Candor his own character, and he’s not the racist Roy Stride was, but it still feels like a bit of a rehash. A trial ensues after Lance bombs Coyul’s office, with Marcus Aurelius serving as judge and two unidentified historical figures as lawyers. While Godwin drops hints about who the attorneys are, I actually had to look it up afterwards. Kind of odd considering that Judas’ identity is spelled out in the first book despite being obvious. I did recognize another person not specifically identified by name, L. Ron Hubbard reincarnated as an answering machine. Other new characters include Coyul’s old girlfriend Purji (who had been playing fertility goddess on another planet), Lance’s shrewish and sex-hating wife Letti, and flaky hippie revolutionary Scheherazade Ginsberg. The general assessment is that this isn’t as good as the first book, but I did appreciate seeing the characters again.

1 Response to Mice, Ducks, and Aliens