Mother! – Beth is a fan of Darren Aronofsky’s films, and we finally saw this one at the Nitehawk Cinema in Williamsburg, the part of Brooklyn that you can’t get to from other parts of Brooklyn. That’s an exaggeration, but not much of one. The theater is similar to the Alamo Drafthouse, only much smaller. The film itself didn’t do well at the box office, but has had some great reviews. It’s a pretty bizarre movie with a lot of surreal imagery, climaxing in a total assault on the senses. And there are some pretty major SPOILERS in this review, so be forewarned. The movie is essentially split into two parts, one absurd but mostly plausible and the other batshit crazy. It stars Jennifer Lawrence and Javier Bardem as a married couple with a significant age difference who never refer to each other by name. In fact, no one in it has a name, but it wasn’t something I thought much about until I saw the credits. They live in an isolated country house that had once burned down, killing Bardem’s first wife.

Lawrence spends her time fixing up the house and tending to the needs of her husband, a writer who begins the movie with severe writer’s block. 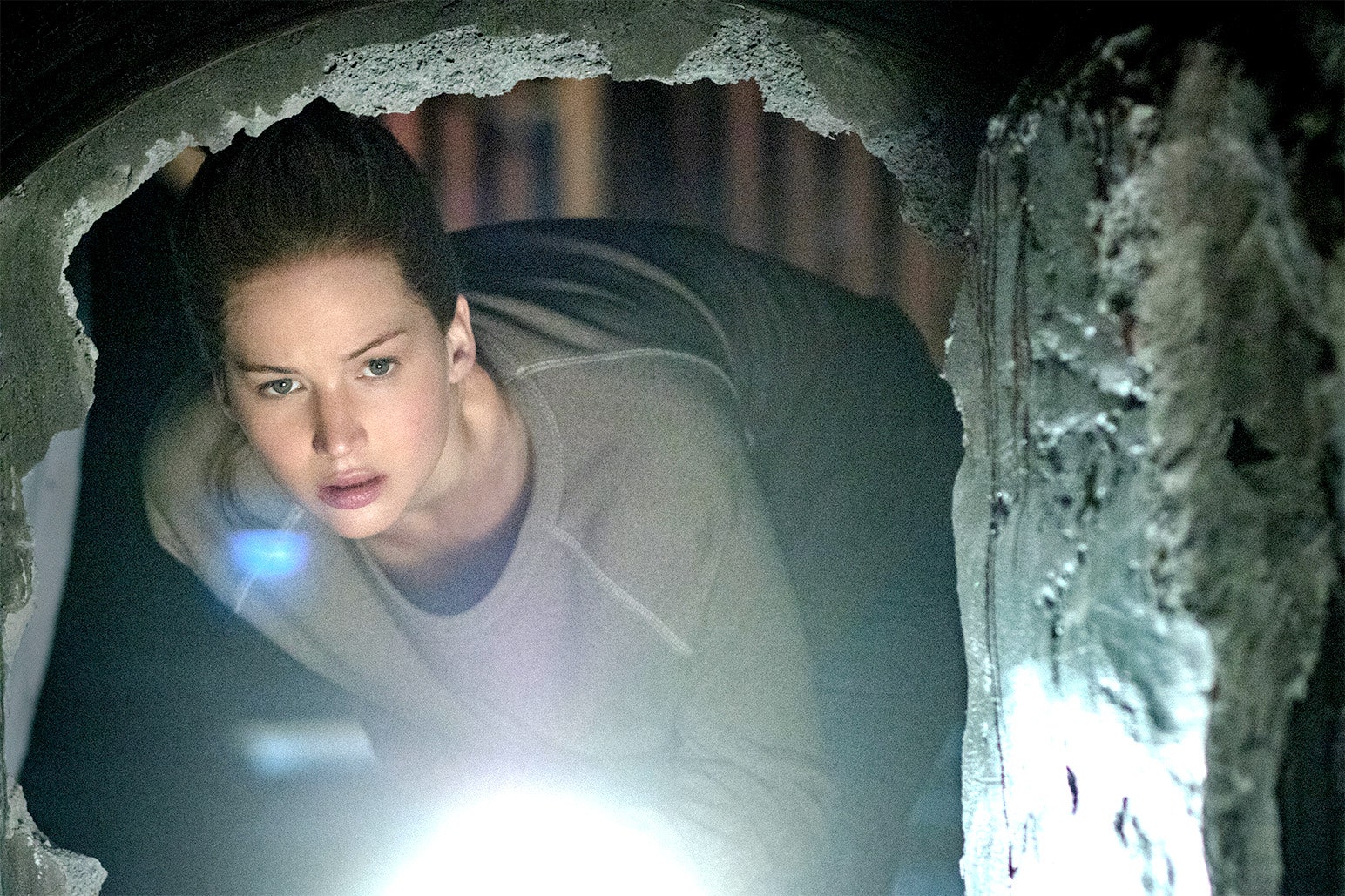 A man mysteriously arrives at their house and decides to stay there, with his wife arriving the next day. Lawrence is understandably disturbed by this, but Bardem is strangely unconcerned. The guests are rude and nosy, and there probably could have been a decent movie made just out of how difficult it can be to get rid of unwelcome visitors.

It was part of the home invasion genre, similar to a few others we’ve seen, but what particularly came to mind was this Monty Python sketch:

I noticed that a few of the commenters said the same thing. Things get even worse when their two sons arrive and get into a fight over their parents’ will, which ends in one murdering the other. Then, for some reason, the wake is held in the house as well. The ever-increasing crowd finally leaves after two of them break a sink. After that, Lawrence becomes pregnant (and somehow just knows she is without taking a test or anything) and Bardem is able to write again. His new book becomes an overnight bestseller, and once again the house is mobbed, this time with his fans. The crowd becomes increasingly ridiculous and disturbing as the film goes on, stealing things, wrecking the house, and eventually murdering each other. Unable to escape and with her husband brushing off her concerns, Lawrence gives birth in the one room that isn’t full of people. She tries to protect her baby, but Bardem gives him over to the crowd, who proceed to kill and eat him. I suspect that’s a large part of why the film was so controversial, and it was definitely uncomfortable, but at the same time nothing happening at this point makes any sense and it isn’t portrayed realistically. Eventually, Lawrence burns down the house, but Bardem survives and is last seen living in the rebuilt house with an even younger wife. And apparently nobody is suspicious that he’s had two wives die in fires that he lived through, because this isn’t that kind of movie.

It seems pretty clear that there’s some symbolism going on here, but what exactly is the meaning? Aronofsky and other people involved with the film have revealed that it’s a religious and environmental allegory. The only character whose credit is spelled with a capital letter is Bardem’s character Him, indicating that he’s God. Lawrence is Mother Earth, which is why she’s “mother” even before she gets pregnant.

Adam and Eve and the forbidden fruit come in with the couple played by Ed Harris and Michelle Pfeiffer being fascinated by the crystal that was the one thing remaining from the first time the house burned down and breaking it, the one thing that actually makes Him mad. The brothers are obviously Cain and Abel, and the broken sink Noah’s flood. Then there’s a baby who’s killed and ritually eaten, and destruction of the world by fire. I guess the world burning up and then being reborn is more directly comparable to Ragnarok than Revelation, but there are a lot of similarities there. The environmental theme comes in with how Lawrence is generous even when she doesn’t want to be, and everybody takes advantage of her.

While these themes fit, I’m not sure they’re that clear in the actual movie. I noticed some of the religious stuff, but the environmentalism not so much. It’s not surprising (hey, Noah was a straight-up retelling of a Bible story with an environmental message), but I’m not sure it was a fully effective metaphor if I didn’t even think of until seeing a mention of it online. Or maybe that’s just me. I’ve also seen suggestions that it’s self-examination on Aronofsky’s part, an examination of the parasitic nature of creativity, although wouldn’t that mean he’s comparing himself to God? I found out after watching the film that Aronofsky is now dating Lawrence, which makes me wonder if she paid attention to the movie she was in. Isn’t he more or less saying he just assumes he’ll take advantage of her? Or is it one of those cases where it’s okay because at least he admits it? Regardless, I think the movie works well enough on its own even without really taking the allegorical elements into account; it’s effectively surrealistic and emotional, and there are some mundane messages you can take from it as well, like how it feels to be the only sane person in a situation, and how having a baby won’t fix a bad relationship.