I Hate You, But You Love Me

I’ve been meaning to write a political post for a while now, but do I really have anything to say that hasn’t been said a million times already? The country has had plenty of terrible people as President, but were any of them also as grossly incompetent as our current one? Thirty-six percent is a low approval rating, but how does he even have that much support? It’s strange to me how many contradictions there are in his message, and not just because you can find an old tweet of his criticizing pretty much everything he’s doing now, but just in general. 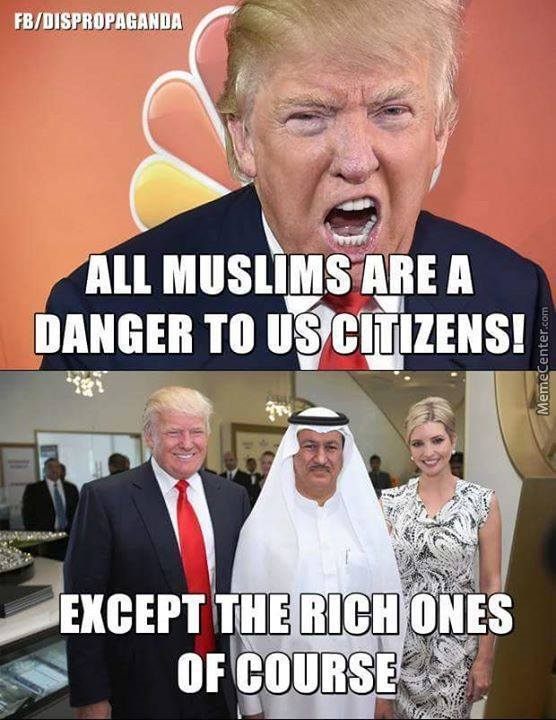 He wants to be popular and well-loved AND purposely alienate large groups of people? The slogan “Make America Great Again” suggests that the country WASN’T great before he took office, yet he still believes in American exceptionalism? How can both be true? In the first case, it’s no surprise that he’s such a fan of Vladimir Putin, because he has the same desire to silence critics. That’s a good way to get everyone to hate you, but never dare to admit it, which sounds like a delusion to me. I know part of it is that it’s easier to get people to agree with your agenda if they never see the arguments against it, but don’t you end up doing the same thing to yourself? Maybe you don’t care if you already have a lot of money and power, but I’m not even sure about that. I mean, how many times has Trump bragged about his television ratings? He’s essentially the most powerful person in the world, so why would he care about something so relatively insignificant? And why have rallies after you’ve already won? I seem to remember reading that Trump’s morale was lowered by all the protests against him, which kind of surprised me because I figured he was just the kind of person who wouldn’t pay attention to such things. A protest can only be effective if people take notice of it, right? And back in August, Eric Trump said his father had to tune out negative media coverage or “quite frankly you’d probably end up killing yourself out of depression.” Yeah, because you couldn’t take the criticism into consideration, or resign if you really can’t handle it. It seems at first like a good thing that Trump is actually bothered by criticism, but not so much when his reaction is to encourage censorship and double down on pandering to the small but significant subset that still supports him.

I had also wanted to comment a bit on this negative review of Hillary Clinton’s book, which is from more than a month ago, but I guess it’s still all right. I haven’t read the book and I’m not sure I will, but I think the review makes some valid points. Two of the main ones are that she comes across as out of touch and as far too pragmatic. I do want to qualify the latter somewhat, as there’s nothing wrong with being pragmatic; you pretty much have to be to succeed in leadership. But it sounds like Hillary wasn’t even TRYING to be particularly progressive.

It’s one thing to compromise, but another to essentially start negotiating with the other side’s position. Obama was criticized quite a bit for this early on in his administration, presumably trying to get the opposition to like him, and I think he learned that’s not always possible. I think it’s quite likely that, if Bernie Sanders had been elected, he wouldn’t have been able to make public college free for everyone, but I’d have given him credit for trying. Hillary gives the impression that she didn’t want to try, that she was too sympathetic to the Republican position that it would just be a handout to lazy people (although somehow they don’t seem to care when rich people get handouts). And couldn’t she explain that there had to be concessions to get the crime bill passed AND apologize for its negative impact? That’s hardly the contradiction that believing America is exceptional AND wanting to make it great again is. I’m getting increasingly annoyed at American exceptionalism, and I never liked it. Hillary’s answer to Trump’s slogan was that America was already great. And it is in some ways, many of which Trump wants to get rid of. But we still have a lot of problems as well, and I feel that exceptionalism is often an excuse not to try to improve.

2 Responses to I Hate You, But You Love Me