With Halloween coming up and Scorpio being the reigning sign in the zodiac, I thought I might say a bit about scorpion people. Part of Mesopotamian mythology, there isn’t a whole lot of information about them, but they did appear in both the Enuma Elish and the Epic of Gilgamesh. There are two terms for them, aqrabuamelu and girtablilu. They were created by the primordial deity Tiamat to aid her in the war against the noisy younger gods, along with snakes, dragons, storm demons, human-headed lions, fish-people, and bull-people.

Marduk managed to tame some of these monsters, making them protectors instead of predators of humanity. The scorpion people now work for the solar deity Shamash. Two of them, a man and woman, guard the gates of the underworld and letting the Sun out every morning and back in at night.

They apparently spend nighttime torturing the dead. Gilgamesh encountered them on his quest for immortality at the mountains of Mashu, which he reached after traversing the cedar forests of Lebanon. This is a little geographically bizarre, as that would place it northwest of his native Uruk, yet the place he was trying to reach was Dilmun, a paradisiacal land associated with the Persian Gulf and the sunrise. Anyway, the scorpion people were terrifying to look at, but actually pretty friendly to Gilgamesh, warning him of the dangers that lay ahead. Taking the Road of the Sun, a long tunnel through the mountains that Shamash took every night, the hero would have only twelve hours to navigate through total darkness to the other side, or else he’d be burned up by the returning Sun. They did eventually decide to let him try, as he was a demigod with powers beyond those of most mortals. And as you may know, he made it through, but failed to achieve immortality. The Epic describes these monstrous guardians as being so large in stature that their feet were rooted in the underworld and their heads in the heavens. They were said to be able to kill with a glance, and as if that and the stingers weren’t bad enough, they were also expert archers. Depictions tend to show them as similar to centaurs, with human heads and torsos on top of scorpion bodies.

Scorpions and part-scorpion beings appear to have been fairly commonly used as symbols of protection, probably because you’d rather have such a disturbing animal on your side rather than against you. 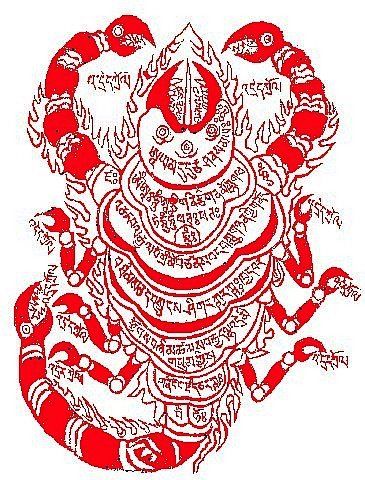 The Wikipedia article links them specifically with the minor Aztec gods known as Tzitzimime, but while I’ve seen a few other mentions of such beings with scorpion features, they don’t seem to have been especially associated with that particular sort of animal. There are some deities in various pantheons affiliated with scorpions, including the Egyptian Serqet.