The Best of Inventions

If you’ve read the Oz books, you might remember Smith and Tinker as the creators of Tik-Tok, as well as the Giant with the Hammer and, as per Rachel Cosgrove Payes, the Hundred-Year Alarm Clock.

I’ve written about them before myself. They never actually appear in the main series, and I don’t think most of the authors even mention their names. Ruth Plumly Thompson occasionally refers to them as “a firm of magicians,” while I don’t think L. Frank Baum ever indicated that they practiced magic. Then again, Dorothy suspects at the end of Ozma of Oz that Tik-Tok’s machinery probably wouldn’t work outside a fairyland, and some of the inventors’ deeds sound rather magical; but whether they actually work magic or just utilize the magic inherent in fairyland isn’t clear. Many magicians in the Oz series are inventors anyway. James Howe’s Mister Tinker in Oz finally brings in one of these men as a character, and he’s given the name Ezra P. Tinker. Rejano Edison Smith turns out to still be alive as well, as seen in Jim Vander Noot’s short story “Button-Bright and the Knit-Wits of Oz.” They both settle in the Emerald City at the end of their respective stories, Tinker as First and Only Royal and Official Inventor of Oz and Smith as Royal Painter of Oz, but since they’re absent at other times when they might be useful and are never shown meeting again, it’s likely they come and go.

Other works reveal more details about the life and work of these two. When the American military stumbles upon the Ozian landmass in Timothy Perper and Martha Cornog’s “A Side View of the Nonestic Islands,” a paranormal researcher named John Smith learns about it and remembers ” a family tale about a nineteenth century Smith, an ancestor of some sort, an artist and inventor who had gone to the South Seas to open a machine shop.” The connection is spelled out later in the story. According to “Glinda and the Red Jinn,” Smith and Tinker were the first ones to teach magic to Jinnicky. Since he claims to have been practicing magic for 200 years in Yankee, this means the inventors might have been active as early as the eighteenth century. This also suggests Smith’s middle name was not a direct reference to Thomas Edison in-universe. Still, since he has the last name of another famous inventor for a middle name, I’ve decided that Tinker’s is Pascal. “Knit-Wits” has Smith mention that he visited the Emerald City during the Wizard’s reign, which would be nice to tie into his giving the Hundred-Year Alarm Clock to Singra in a trade, but Singra was likely enchanted before the Wizard’s arrival. Mysterious Chronicles introduces Dcim Wainwright, a former apprentice of Smith and Tinker who used the prototype version of the ladder Mr. Tinker used to reach the Moon to ride a cloud to Oz.

The ladder also appears in Onyx Madden’s sequel that I’m not sure was ever completed.

Picture by Shawn Maldonado
In Mister Tinker, Ezra uses several inventions. The Speckoscope is a sort of telescope that can shrink people, Julius QuickScissors a pair of fast-acting automatic scissors, Wishful Fixing Lotion a solution that can fix anything if accompanied by a wish, and his compass-watch a device that gives directions and other advice and can apparently even turn back time. Button-Bright finds Mr. Smith operating a color-mixing machine, and later planning to build an automated version. In Phil Lewin’s Witch Queen, Dorothy and her companions run into a Stumbling Block in a Quadling field, with a plate on it indicating that it was built by Smith and Tinker to deter evil witches. The Nome Wizard Potaroo also has Stumbling Blocks. And in the longer version of Frank Joslyn Baum’s Rosine and the Laughing Dragon, Jack and Quackie use a freezer identified as Smith and Tinker’s Frost ‘n Freeze to make an ice bridge across the Milkshake River. Wooglet mentions that Rejano Smith’s more practical but less imaginative grandson has restarted the old business in Ev, and one of his inventions is a sort of diving suit that provides fresh air, regulates temperature, and adjusts to increasing water pressure. According to Thorns and Private Files, the company also makes photocopiers. I’m sure there’s a lot more still to discover about the enigmatic inventors and their firm, and whether they might have been involved in the construction of any more of the robots or cyborgs in fairyland. 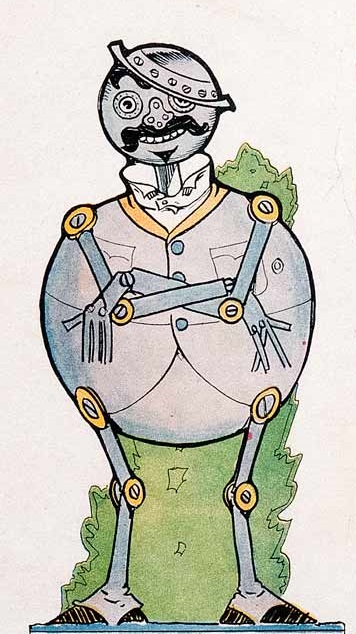 3 Responses to The Best of Inventions