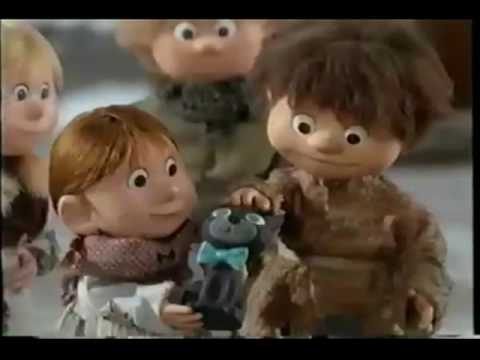 I might do a re-read of The Life and Adventures of Santa Claus this year, seeing as how I have the new edition with Eric Shanower’s illustrations. I guess it depends on how soon I finish the library books I have checked out. But anyway, this book credits Santa with making the first toy, a wooden cat; and later the first doll from clay.

L. Frank Baum sets the story in an unspecified past, when “[t]he world was new” and “so long ago our great-grandfathers could scarcely have heard it mentioned,” but the mention of Christmas suggests it couldn’t have taken place before the fourth century AD. We know that playthings existed long before that, so I suppose the mythology has to be taken with a grain of salt. Also, we know that Merryland is ruled by a wax doll who is also a fairy, so did she exist before Santa made the first doll?

I’m sure I’m thinking way too hard about this, but that’s basically what I do here. The Baum and Oz books contain a lot of toys, including living ones and beings inspired by them in different ways. The Scoodlers, for instance, were based on jumping jack toys with faces on both the fronts and backs of their heads, but they’re flesh-and-blood creatures.

Bear Center is a community of live teddy bears.

We don’t know who created them, but the King claims that the fairies dropped some magic into his body while he was being stuffed. According to Bill Campbell and Irwin Terry’s The Lavender Bear of Oz, the city is equipped with the necessary materials for the bears to repair themselves and even make new residents, with help from the Threadbears who produce strands of thread from their own bodies. Miss Cuttenclip has a village of paper dolls made from living paper provided to her by Glinda.

The Squee Gees are rubber people who live in a rubber city in the southern Gillikin Country, and Kabumpo compares them to Princess Pajonia’s rubber dolls that can only make noise when squeezed. As such, they have to punch or squeeze each other in order to converse.

Oddly, one of the Squee Gees is said to be a baker, but there’s no indication as to what a rubber man might bake. There are a few different communities of balloon people, and an island of living kites. The Fuddles, Topsies, Hoopers, and Sport from the island of retired pirates and bandits are based on jigsaw puzzles, tops, rolling hoops, and sporting equipment, respectively. Peg Amy spends time as a live wooden doll, and Twiffle and Twoffle in Jack Snow’s Shaggy Man are little wooden clowns.

Getting back to Merryland, two of the seven valleys there are inhabited primarily by toys. The Fourth Valley, where the Queen lives, is home to dolls of many different sorts. Most of them are quite small, and live in dollhouses set on streets lined with trees carved from wood and grass made of wood shavings. The Queen herself is the size of a small child, and carries a magic wand. She rides in a coach drawn by horses on wheels. They eat cotton, while the dolls eat sawdust. The majority of her subjects are mischievous, troublesome, and hyperactive, so she only animates them for a little while at a time, which seems rather cruel.

There’s a lot about Merryland that comes across as perhaps unintentionally dark, though. Queen Dolly also has a room in her palace decorated with laughing children’s faces, which I can’t imagine would be too pleasant, although Tot seems to like it.

In the Sixth Valley, there are a good many wind-up toys, including a merry-go-round and a train, as well as a lot of animals. One alligator contains a squeaker, and unlike the Lavender Bear’s embarrassment at his own, he quite enjoys hearing it but can’t unless someone steps on him.

Winding up the residents is the job of Mr. Split, a wooden man who can split himself into two by means of brass hooks. When separated, his left side speaks only the beginnings of words, and the right only the ends.

The alligator refers to a person who made him, but never says who it was.

In Ruth Plumly Thompson’s The Curious Cruise of Captain Santa, the titular character visits the Lost Islands, which, like Merryland, are home to many living toys. One of them, Rockaway Island, not only rocks back and forth itself but is inhabited by wooden rocking animals.

Another, Doll Island, is ruled by a jack-in-the-box, and its inhabitants speak a language called Squeek.

With their permission, Santa and his crew take some of the residents, buildings, and vehicles to use as Christmas presents; but they are no longer able to talk and move on the other side of the horizon. Santa thinks they might come to life again if they’re loved enough.

3 Responses to Christmas, Toys, and Oz