Luke, Be a Jedi Tonight

Star Wars: The Last Jedi – Yeah, I finally saw this last night. It was a 3D showing, something I usually avoid due to the extra cost with little return, but I would have had to wait another hour otherwise. It was effective, I suppose; it DID look like spaceships were flying right towards me. Anyway, I have to say I liked this movie better than Episode VII, and there’s a lot that happens in it. I’m definitely going to be including SPOILERS here, by the way.

The film starts with the remnants of Leia’s Resistance trying to escape from the First Order. Poe Dameron is able to take out a Dreadnought, but since he disobeys orders in doing so, Leia demotes him. An attack from Kylo Ren’s forces kills many of the Resistance fighters, but Leia herself manages to survive with serious injuries, resulting in Vice Admiral Holdo (I’m not quite sure how these ranks work; an admiral succeeds a general?) being promoted to command. This character is played by Laura Dern with purple hair, and her plan is to evacuate the main ship, which Poe considers cowardly, leading him to launch a mutiny.

He wants to take out the First Order’s hyperspace tracker, and Finn volunteers for the mission due to his knowledge of the Order’s ships due to his time as a maintenance worker. First, however, he, BB-8, and Rose Tico, a mechanic whose sister had died in Poe’s ill-advised attack, have to find a codebreaker recommended by Maz Kanata in order to infiltrate the ship, and he’s at a casino. I really like this setting, a gaudy location full of lowlifes, the typical mix of humans and aliens for this series. There’s one guy who keeps trying to put chips into BB-8 and a bunch of racing donkey-creatures that the lovable urchin grooms release in order to facilitate an escape. I’m also surprised that I was able to identify Lily Cole in a brief non-speaking cameo.

Finn and Rose are arrested before they can get to the codebreaker, or at least I assume it’s supposed to be him, although I kind of think they left this plot point dangling. Maz just said he could be identified with a pin, and those are transferable. Anyway, they instead end up with Benicio del Toro, playing a self-centered, apathetic character who just goes by DJ. He’s competent, and helps Finn and company break into the ship, but then betrays them to the First Order after being caught. I have to wonder if they’re going to do more with this character, and whether he’s going to follow the general arc of the selfish neutral guy eventually coming around to the side of good as with Han and Lando.

Meanwhile, Rey has found Luke Skywalker in his island hideout, but he’s grouchy and unwilling to help her, still blaming himself for his nephew turning evil, and thinking the Jedi need to end for good. He has kind of a point in that the Force shouldn’t be only for a few elite individuals, but that’s less an argument for no Jedi at all as it is for Jedi as instructors to the masses as well as lightsaber-swinging warriors. He does start to train Rey, after some nudging from R2-D2, but is frustrated by how she doesn’t do enough to resist the Dark Side. Dude, it’s, like, her first day. I found Luke to be disturbingly like Obi-Wan with his incomplete answers and explanations, but maybe that was on purpose. Rey also doesn’t tell him that she keeps having psychic conversations with Ren. Hasn’t anyone learned the value of telling the truth to potential allies? I’ve never totally understood the appeal of turning to the Dark in this universe. When Rey calls out Ren for murdering his father, he tries to do some “yeah, but” thing. Look, maybe Han wasn’t the best parent, but that’s no reason to kill him. That’s hardly some moral gray area; it’s pretty straightforward. Also, it’s interesting that Luke’s island has its own dark cave of evil just like Yoda had on Dagobah; I guess they kind of form around powerful Jedi? Speaking of Yoda, he’s there in Force ghost form to inform Luke that he can learn from his failures and that artifacts are less significant than people. Rey, meanwhile, goes to confront Ren and Snoke. 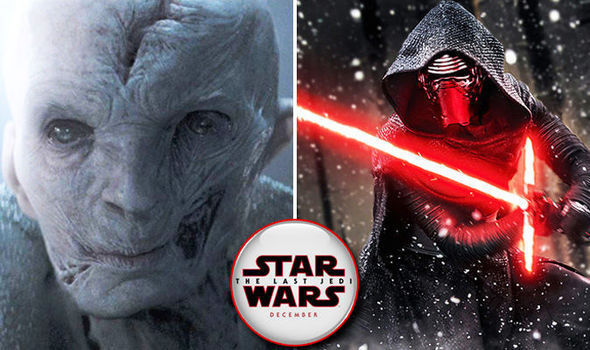 During the confrontation, Ren kills his boss and takes over the new Supreme Leader. Finally, there’s a showdown on the salty mining planet Crait, where Luke shows up and survives a crapload of laser blasts before finally revealing he’s just a Force projection, although the energy involved in this causes the real Luke to die. So with him and Han dying in the films and Carrie Fisher dying in real life, I guess we’re not going to have any of the original trio in Episode IX, except maybe as ghosts or flashbacks. That’s kind of disappointing, since everything they fought for had been lost.

One thing I complained about with The Force Awakens was all the repetition, and there wasn’t quite as much here. There was some, certainly, particularly in Rey’s confrontation with the villains, but the whole series was based on mythic archetypes anyway, and that’s part of the Hero’s Journey. Destroying a third giant battle station, not so much. There’s still very little to distinguish the First Order from the Empire. While watching this and thinking how much Snoke came off as just a second-rate Palpatine, I kind of think that if they had to go this way, they should have called more attention to how unoriginal he was, right down to making the same mistakes. There were a few comments by the Resistance about the Order not noticing small ships, because it’s not like tiny ships ever took out anything big in previous wars, right? They’re also still using the same armor that doesn’t protect against diddly-squat, the same AT-AT Walkers that were cool-looking but impractical, the same snooty, petulant British officers, and another battle station with a small weakness to exploit. Rey called out Ren in Episode VII for just trying to be another Darth Vader, and I guess he somewhat surpasses Vader by killing his master in the second part of the trilogy instead of the third. So maybe do more to make the status of the First Order as copycats part of the plot? I also noted how Captain Phasma, who seems to be a fan favorite, was given only a small role in both films.

I guess she’s kind of the new Boba Fett in that respect, popular without actually doing much of anything.

BB-8 proves himself a truly versatile badass, detaching and reattaching his head with no effort, taking control of a larger droid, and attacking with casino chips. I also appreciated the variety of creatures seen here, although seeing Luke milk that whatever-it-was (a Thala-siren, according to the Internet) was bizarre. 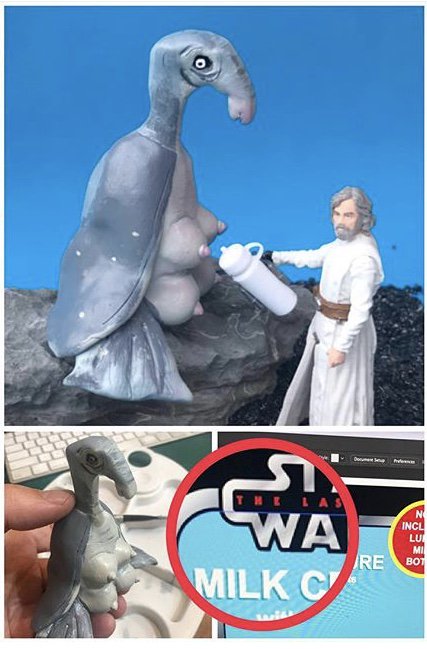 4 Responses to Luke, Be a Jedi Tonight