The Sims 4: Cats and Dogs – I’ve gotten the expansion pack that lets you have pets in all four Sims games. While I don’t necessarily get pets for every active household, I do for many, as it just seems natural for a home to have them (even though I didn’t have any myself until I was ten). It was really exciting when they actually managed to get pets into the first Sims game, but the control was kind of awkward. The rules for pets have changed over the course of the series. This time, while pets are part of the household and you can zoom in on them, you can’t see their moods or intended actions like you could in previous installments. Instead, you have to rely on cues and thought bubbles to know what they want.

Feeding and attention are easy to figure out by this point, and there are still bad behaviors you have to correct with your human Sims. 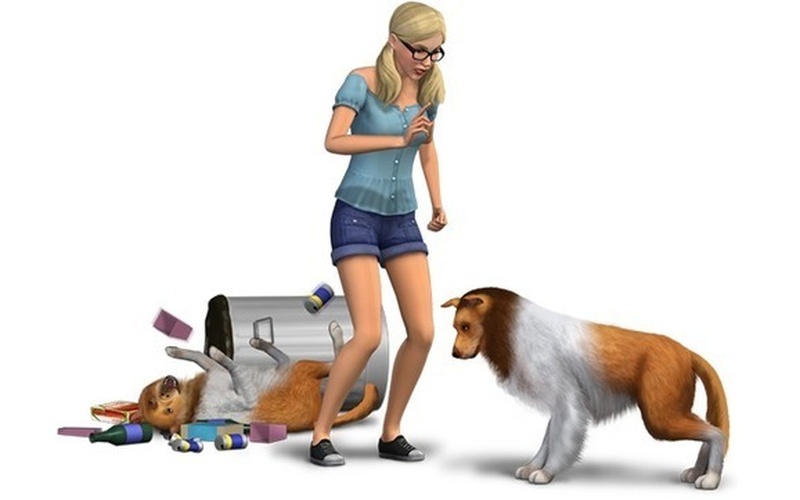 Pets now sometimes have reactions to household objects, like being afraid of the shower. As per the expansion title, only cats and dogs are available here, no horses like in Sims 3. Technically, there are raccoons and foxes, but they act exactly like cats and dogs, respectively. The voices are a little different, though.

I’m not sure when the option to teach tricks to a pet shows up; it already did for one of my Sims, but not any others that I can recall. The two in-game ways I’ve seen to get a pet are to adopt one from the agency or to find a stray and adopt it.

In the one case I’ve done the latter, it didn’t take a whole lot of interaction to befriend the cat. I recall other Sims games making it awfully difficult to become friends with strays, which would only come around every once in a while. I haven’t yet seen any animals age up or reproduce. A lot of the ones at the shelter are already neutered, which I wholeheartedly support in real life, but it seems pointless in the game. One thing I liked in Sims 3 was that a neighbor would occasionally have kittens or puppies and let the active household adopt one. I don’t know whether anything like that happens in Sims 4. I’m also not sure about pet lifespans, or if there’s any way to prolong their life like with the Potion of Youth for human Sims. But the pets are definitely cute; I can tell you that much.

Speaking of lifespans, I pretty much had to switch my game from having all households age to just the active household, like in Sims 2. I’d already had it set to the longest span, but that’s still much shorter than it was in Sims 3, and it seemed like the residents of households I wasn’t playing aged way too quickly. I get attached to these characters, you know? I don’t necessarily want them to live forever, just for them to accomplish their goals before they die. That’s kind of how I feel about real life, too. Too many people go way before they’ve contributed all they can. Anyway, I usually switch between the families I’ve created pretty often, whereas in Sims 3 that was difficult to do. In the first game, Sims could never die of old age, yet it still seemed like you had less control overall. It seems like the series has progressed so that there isn’t as much challenge, but there’s a much greater amount of things you can do and see. Or maybe I’ve just gotten accustomed to the control system after all the time I’ve played the various games. There were times in the first game that Sims would do something surprising or just plain dumb, while later ones make them largely self-sufficient, although they generally won’t do anything to advance in their careers or skills unless you nudge them.