I hadn’t yet watched the newest Pee-wee Herman movie that came out about three years ago, nor had I seen his second from 1988, so I figured I might as well watch all three of his films back-to-back. Well, not exactly back-to-back, as I watched a few other things in between, but close enough to each other as not to make much difference. While the Pee-wee character is pretty consistent in personality, his circumstances change from one adaptation to the next.

Pee-wee’s Big Adventure – This 1986 film wasn’t actually the first to use the character (I think that honor goes to a Cheech and Chong movie), but it was the first to use his as the protagonist. It was also the first feature film directed by Tim Burton, and while I haven’t found all of his more recent efforts that interesting, he was a great choice for a movie that was kitschy and goofy but still a little eerie at times.

I’ve heard of kids being scared by Large Marge, and that clown where Pee-wee parks his bike is still pretty creepy.

The film begins with a dream sequence (all three of them do), then we see Pee-wee start his day with help from several Rube Goldberg devices. He’s living in a suburban house, presumably alone except for his dog. Francis, a rich guy who also acts like a kid but is played by an adult, although he at least lives with his dad, tries to buy Pee-wee’s bike, and when Pee-wee refuses, he instead pays to have it stolen. When the police and his friends can’t help Pee-wee find the bike, he consults a fortune teller who, based on signs she can see from her window, tells him it’s in the basement of the Alamo. He takes to hitchhiking, first with an escaped convict whose crime was cutting the tag from a mattress, then a trucker who turns out to be a ghost; and rides the rails with a singing hobo before finally finding out the Alamo has no basement. He finds out through a television segment that it’s actually in Hollywood, so he goes there to take it back, and there’s a long chase scene on the Warner Bros. backlot. It ends with a movie being made based loosely on his exploits, and everyone he met along the way attending the premiere at the drive-in. In addition to the rapid-fire pace of the jokes and a funny cast, Pee-wee also works because, despite his being annoying fairly often (sometimes on purpose and sometimes not), he has a naive optimism that’s infectious, so you can really kind of buy it when he wins over a bar full of angry bikers by dancing to “Tequila,” or dresses himself and the convict in silly costumes to fool the cops.

And jokes and gags that were already old hat by that point are still effective in the movie’s weird atmosphere. It definitely holds up. 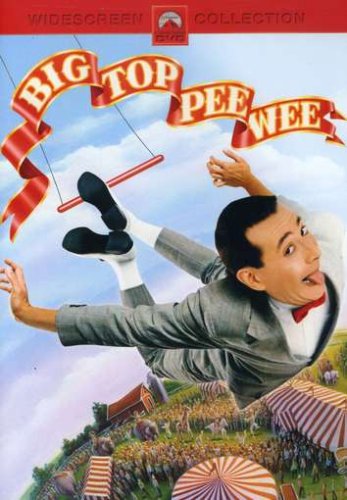 Big Top Pee-wee – The follow-up film was nowhere near as successful, which is probably why nobody talks about it much. It did have its moments, but I think it suffered a bit from less interesting supporting characters. Pee-wee is funny, but he shouldn’t be the ONLY funny part. This time, he’s a farmer who does weird and fantastic botanical experiments with help from a talking pig.

When a storm blows an entire circus onto his farm, he helps them to plan a show. He also falls in love with a trapeze artist, despite the fact that he’s already engaged to the local schoolteacher.

It’s a rather more literal interpretation of Pee-wee restoring a sense of childish wonder, and what’s even stranger is that there’s no indication that he ever changes them back.

Pee-wee’s Big Holiday – After retiring the Pee-wee character for a few years, Reubens announced in 1999 that he was working on some new ideas for Pee-wee movies, and he did a stage show in 2010. (Beth and I were going to attend one of them, but since I couldn’t get the time off from work, she went without me.) While the third film was turned down by movie studios, it was picked up by Netflix, with Judd Apatow attached as co-producer and John Lee (formerly of the band Muckafurgason, which They Might Be Giants fans might remember) directing. While Danny Elfman had done the music for the other two movies, this time it was another New Wave veteran, Mark Mothersbaugh, who had also scored Pee-wee’s Playhouse. This movie consciously imitates Big Adventure in many ways: it starts with Pee-wee beginning his day with help from Rube Goldberg devices, uses a road trip where Pee-wee meets a lot of quirky characters as its central plot device, and ends with most of the characters he met returning. While not as good as Big Adventure, it still totally works, and I would think most of the new characters here would have easily fit into that one. It is bizarre seeing Reubens, now in his sixties, playing the character again; but it was an immersive enough experience that I mostly forgot about that after a little while.

The story has Pee-wee as a resident of a small town who works as a cook at a diner, and he’s afraid to leave town after his first attempt somehow resulted in his getting a metal plate in his head. When Joe Manganiello, playing himself (he even mentions being in True Blood and Magic Mike, neither of which I’ve seen), visits the town, he and Pee-wee immediately hit it off, and he invites Pee-wee to his birthday party in New York City.

A series of absurd adventures along the way includes being captured and later assisted by a trio of bank-robbing women, escaping a shotgun wedding with a disguise kit (the absurdity being heightened with the fact that he apparently got a full-size toy horse out of a tiny box), using an umbrella to bail out of a flying car with engine failure, meeting a rapping mountain man, teaching an Amish community to make noise with balloons, and finally being rescued from a well in Central Park with a magnet.

So what’s next for Pee-wee? Well, I remember Reubens talking about in 2004 about two scripts he was working on, neither of which were Big Holiday. One was a spin-off of Playhouse that brought the characters out into Puppetland (an idea I’m pretty sure he had even before Playhouse was on TV), and the other a somewhat darker story of Pee-wee becoming a singing sensation and subsequently a total jerk. Whether either of these is still in the works, I don’t know. There’s a lot of nostalgia in reviving the character, and while it seems to be working for those of us who grew up with him, I’m not sure how many new fans there are these days. But then, there was a sense of nostalgia to Pee-wee even when he first started, what with his fondness for vintage kitsch and callbacks to old kids’ shows. It seems that nowadays everything from my childhood or somewhat before or after that is being revived, and while certainly not all of the revivals are good (some are quite far from it), I still like the idea. Why let a franchise die when there are still stories to tell?

3 Responses to Three by Pee-Wee