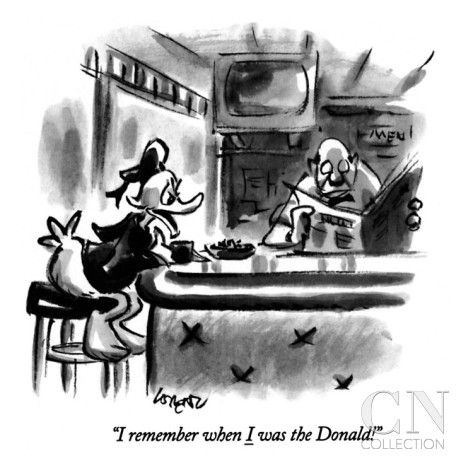 It’s too bad that, these days, the default Google suggestion for “Donald” is our not-so-esteemed president rather than the duck. The two of them do have something in common (aside from the terrible temper), in that both had mothers from Scotland. I’m not sure if Walt Disney realized Donald was a Scottish name when he came up with the character, but it could be why Carl Barks gave him a Scottish uncle. Anyway, I’ve read a few more collections of Duck comics within the past month or so, some presents and others Comixology downloads. 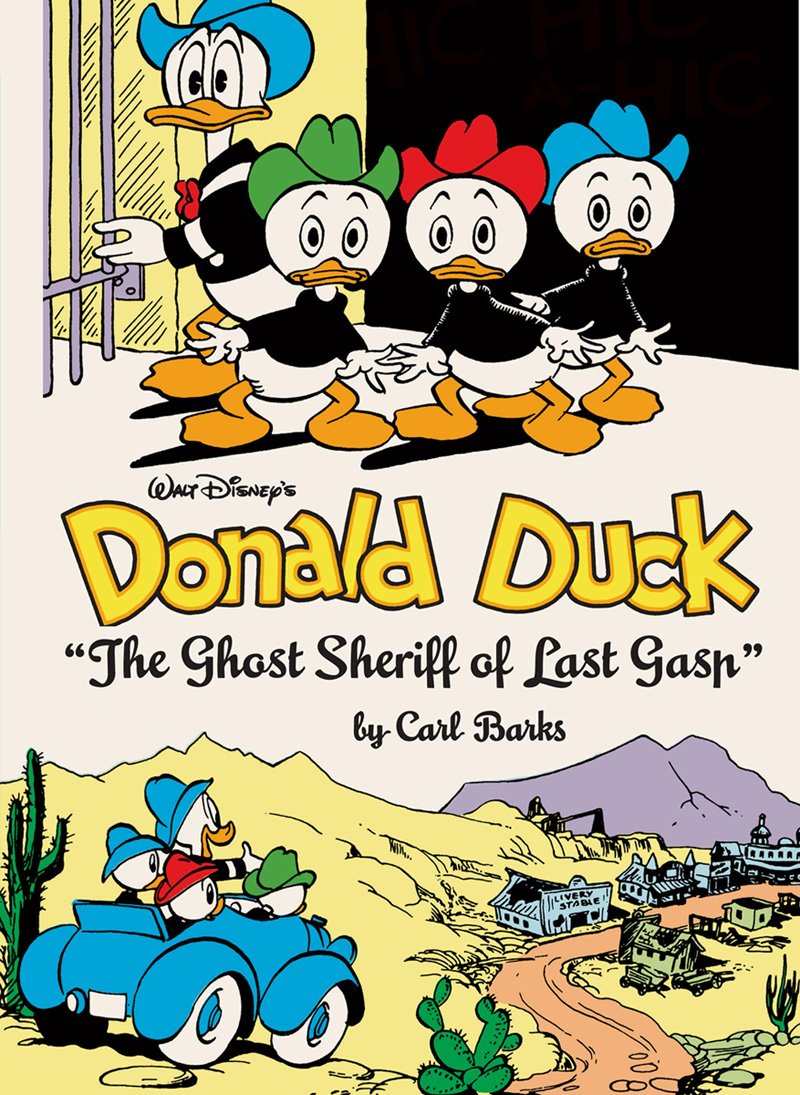 The Ghost Sheriff of Last Gasp – In the title story, the sheriff turns out to be not a ghost at all, but instead a guy who was trapped in a mineshaft for eighty years without aging. Is that supposed to be MORE realistic? He and Donald end up facing off, Wild Bill with guns that are rusted shot, and Donald with cap guns. While the story of “Wispy Willie” is rather thin, based simply on Scrooge’s attempts to trick Donald into selling his house, it does have a mad scientist creating a bizarrely cute will-o’-the-wisp. I also found it interesting that there are a few where Donald actually wins out in the end, even if it’s not always due to his own efforts. A camel that Huey, Dewey, and Louie buy from a defunct circus is hopeless at finding uranium in the desert, but when he ends up covered in glowing paint, a television network buys him. Donald loses a fishing contest to Gladstone Gander, but Donald wins a bigger reward when he saves a rich man’s daughter. Even the writers of the notes are a bit disappointed by “Too Safe Safe,” where Gyro Gearloose invents an unbreakable wax to protect Scrooge’s money, only for Scrooge to realize that he needs access to at least some of it.

Secret of Hondorica – These stories were originally published in 1955 and 1956, and partway through this volume is when the lettering became narrower due to editorial insistence. The lead story is an adventure story where it’s Donald instead of Scrooge taking the lead, a rarity at the time; and also competing with Gladstone. The explanation for why the natives of this imaginary Central American country hate helicopters is pretty clever.

In “The Unorthodox Ox,” Donald borrows Grandma Duck’s ox and cart to win a prize at a fair, and Huey, Dewey, and Louie figure out that he’s angered by blue instead of red due to being color-blind. Bulls are really attracted to motion, not a particular color, but it’s still rather clever. And we get a quite detailed illustration of a literal bull in a china shop.

It’s interesting how Barks can come up with some clever and amusing devices for throwaway gags; one story has Donald unsuccessfully try to hunt with a custard gun invented by Gyro Gearloose, and another has him use a pedal-powered submarine just to cheat in a race. He also puts uranium buttons on his nephews’ hats so he can track them with a Geiger counter; I didn’t realize how many of these comics presented radioactivity as basically harmless.

That’s different from the times we see Donald do something that could intentionally harm the kids, like sabotaging their ice vehicle and filling the river where they’re swimming with oil and laundry starch. I’ve discussed before how Donald isn’t quite as much of a jerk as he is in the cartoon shorts, but there are still occasionally hints of that. The difference is that nobody stays hurt for long in cartoons of that sort, while the stakes seem rather higher in the comics. In general, the ten-page stories are somewhere in between the animated shorts and the adventure stories, not quite as sadistic as the former but able to incorporate a lot more goofy violence without the reader feeling anyone is in real danger, as they can be during the adventures.

Donald Duck: Timeless Tales, Volume 3 – I’ve read this and some of the other English translations of foreign Disney comics that IDW has been releasing, and while the styles of humor can be bizarre by my American standards, there are some interesting ideas in them. One ongoing series has Donald and his cousin Fethry working as paranormal investigators. The Duck Avenger (the English name for Donald’s superhero identity Paperinik) stories are popular in Italy, but at least the ones I’ve seen mostly just show him using the alter-ego to play nasty pranks on everyone who annoys him. I mean, sure, that’s probably what Donald WOULD do in that situation, but he tends to be even meaner than usual. But then, I can’t say I’m familiar with Diabolik, the Italian anti-hero he’s parodying. They do give Donald a chance to succeed, perhaps because the disguise gives him confidence he otherwise lacks. Then again, sometimes he fails in his regular identity because he’s overconfident. The German story “The Call of C’rruso” is one I particularly liked, mixing a singing contest with a play on Lovecraftian horror. The singer C’rruso holds a contest in which Donald becomes a finalist thanks to a magic throat spray given to him by C’rruso’s brother D’mmingo. It turns out that the brothers are subconscious manifestations of the eldritch abomination Pf’legmwad.

C’rruso wants to find a good singer to wake the monster, while D’mmingo is trying to thwart him. His plan is a little overly convoluted, making a bad singer good until he steals the spray at the last minute, when it seems like he could have just told a good singer to intentionally sing badly, but we can’t necessarily expect beings from the mind of a chaotic creature to proceed logically.

The Dutch “The Big Sneeze” has Donald and company visiting an island that contains both the water of youth and potatoes that cause rapid aging, but they’re separated from each other by a dragon with bad allergies.

Donald and Mickey: The Walt Disney Comics and Stories 75th Anniversary Collection – The copy of this I bought on Comixology includes some material that wasn’t in the original collection, but I’m just going to treat it as a whole. Not all of the stories were all that funny or engaging, but I found it interesting for the variety of historical material. The Big Bad Wolf and his well-behaved son, Bucky Bug, Little Hiawatha, Lady and the Tramp’s son Scamp, Walt Kelly’s Gremlins, and Oswald the Lucky Rabbit all make appearances. Much of it is taken up by a story of Mickey Mouse and Goofy running a railroad, which is okay but not all that memorable. A Danish story that has Donald and his nephews protecting Scrooge’s whistling flea from Magica de Spell is mostly just weird. A Chip ‘n’ Dale comic from 1957 features the chipmunks as detectives, anticipating Rescue Rangers by several decades. There’s a Carl Barks story from 1943, but perhaps even more interesting is a comic Barks mostly scripted but never finished, completed by John Lustig and drawn by Daan Jippes in a decent Barks imitation. Scrooge goes to Donald’s house to mooch a meal and tell how he made his first dollar, and the Ducks try to get rid of him. It ends with Scrooge buying a burger with a dollar that Donald used to lure him out of the house. A dollar for a burger would have been way too high when Barks started the script, but we know this page was part he didn’t write.