Knight Time Is the Right Time 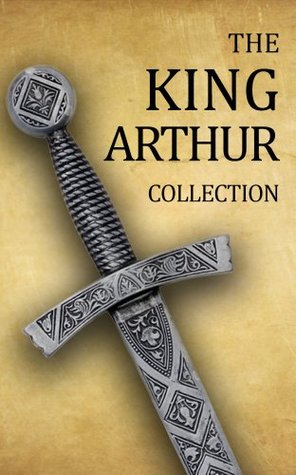 The King Arthur Collection – I’ve been reading this one on and off for about a year and a half. It’s long, but worth reading. There are six separate works included, as well as some background information about the historicity of Arthur and a list of adaptations of the legend. It begins with Sir Thomas Malory’s Le Morte d’Arthur, in many ways the definitive version of the Arthurian saga. Adapted from both British and French sources, it brings together the various stories of Arthur and his court into one long narrative. It takes up more than half the book, and gets repetitive sometimes, as there are endless accounts of jousts and such. Malory wrote in the late fifteenth century, and this version keeps many archaic expressions, but modernizes the spelling. Tying together all this material obviously shows some seams, and not just several stories that are basically the same. During the search for the Holy Grail, there’s quite a bit about Lancelot having to do penance for messing around with Guinevere, but after this he goes right back to the affair. Not that backsliding like that isn’t possible (especially as Guinevere is often shown as making him feel guilty for NOT having sex with her; Lancelot’s own complicity is largely downplayed), but I thought it detracted a bit from the theme. Still, there was a lot to work with there, so it’s not like I can really blame Malory. I looked up the author online, and while it’s not entirely clear who it was (there were several Sir Thomas Malorys active around that time), the most likely candidate was a career criminal who wrote the book while in prison. It was the editor who gave the title Le Morte d’Arthur to the whole thing, when Malory only used it for the last part. It’s kind of weird, as it draws so much attention to Arthur’s death, when his whole adult life is chronicled.

The second book is Alfred, Lord Tennyson’s Idylls of the King, a collection of twelve poems from the late nineteenth century, adapted largely but not entirely from Malory. There’s a stronger sense of narrative in these retellings, but it’s nowhere near as complete. Maude Radford Warren’s King Arthur and His Knights serves as a sort of Cliff’s Notes for the first two books, presenting the same stories in modern language, with the intent that children could read them or have them read to them. There’s also an emphasis placed on how Arthur was considered the champion of the people. The stories Warren retells are all treated as largely separate. Sir James Knowles’s King Arthur and the Knights of the Round Table is another more modern take for a general audience, but I didn’t notice anything that particularly stood out about it. The version of Gawayne and the Green Knight doesn’t credit an author, but it’s by Charlton Miner Lewis, who writes it in verse with a lot of humorous asides, and some added fairy tale elements. The last book included here is Mark Twain’s A Connecticut Yankee in King Arthur’s Court, another largely jokey take on the material, but since I’ve already read that one I didn’t bother to do so again.

I’ve had an interest in Arthurian lore for as long as I can remember, but there were definitely some stories here I wasn’t familiar with. One that I was but still found weird in how widespread it was and how little attention it tends to receive was that of Arthur conquering Rome and essentially ruling all of Europe. Not only do we now have a king for whom there’s very little historical evidence and who is said to have ruled all of England at a time when it wasn’t known to be united, but he also held considerable power in places with better known histories from the time. Not only is Lucius Tiberius, the procurator (sometimes called emperor) Arthur conquered not someone who’s mentioned anywhere else, but if Arthur really lived in the sixth century, the city of Rome didn’t really have much international power. The Roman Empire had already fallen, and the rulers in Constantinople considered themselves its successors. I’ve seen speculation that Geoffrey of Monmouth, from whom Malory adapted this account, might have conflated Arthur with the fourth-century Emperor Magnus Maximus, who is said to have married a British woman and conquered Rome with an army of Britons. Geoffrey mentions him as well, but could have transferred some of his deeds to the more distinctly British Arthur.

I might have come across the brothers Balin and Balan before (actually, I know I did, because I mentioned Balin beheading the Lady of the Lake in a previous post), but didn’t recall their role in the Grail saga. Balin kills Garlon, a descendant of Joseph of Arimathea who turned evil and learned black magic, which allowed him to murder people while invisible. Garlon’s brother, the Fisher King, wants revenge; but Balin stabs him with the spear that had pierced the side of Jesus (there’s a whole museum of holy artifacts in his castle). This wound, known as the Dolorous Stroke, not only injures the King but also his lands, and the Holy Grail disappears from the world until Galahad shows up. Since there are several Arthurian references in the Final Fantasy series, I have to wonder if Garland from the first game might have been named after Garlon. He’s a good knight of Cornelia who allies himself with evil forces, after all. Tennyson even uses the word “Fiend” to refer to Garlon, although in the original Japanese, the Four Fiends from that game are the Four Chaoses. Incidentally, Balin is also the only Dwarf in The Hobbit whose name didn’t come directly from the Poetic Edda. Sir Balan and Sir Balin inadvertently end up killing each other, but we never learn whether they have any other relatives named Balen, Balon, or Balun. This story also includes another sword that can only be drawn by one particular person, in this case Balin rather than Arthur.

Also interesting was the tale of Sir Gareth fighting several brothers wearing differently-colored armor, each referred to as the [Insert Color Here] Knight.

Tennyson further associates these knights with times of day, bringing to mind Baba Yaga‘s three servants in the tale of Vasilisa the Fair. While Gareth fights a Green Knight, he isn’t the same as the one his brother Gawain beheads. That story begins on New Year’s Day, which was historically the Feast of the Circumcision, and Gawain cuts a body part from the Green Knight…okay, now I know I’m reading too much into it.

I’m also fascinated by the Siege Perilous, a chair at the Round Table in which only Galahad (who hadn’t been born yet at the time the seat was installed) can sit without dying instantly. 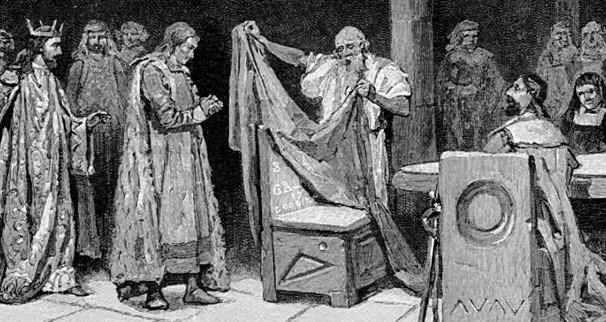 And there are two different Elaines who fall in love with Lancelot, one the mother of Galahad and the other the Lady of Shallot. I wonder if they were ever considered the same, or there were just a lot of Elaines around then. I had a poster of John William Waterhouse’s painting of the Lady of Shalott in college, mostly just because I liked the style.

The story has it that she dies while riding a boat with her name written on it down the river past Camelot, as if to say to Lancelot, “Look what you made me do!” Okay, Tennyson actually has it that she’s cursed to only look at the world through a mirror, and her looking directly at Lancelot dooms her, so it’s not like she’s just trifling.

2 Responses to Knight Time Is the Right Time