Racing in All Different Directions 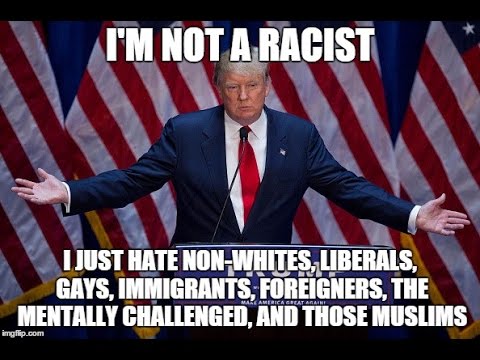 Every once in a while I see an article about something crappy going on with the Trump administration and plan to work it into a post, but I usually don’t because how many times can you really say “the President is a dangerous idiot”? It does bother me how many people still aren’t bothered by him, though. They’re not always supporters, but they’ll say, “Oh, he’s not THAT bad.” Well, no, he’s really racist, and that IS that bad, even without taking the rest of it into account. Then you get the people who think they can reach Trump supporters with rational arguments, like people who think the reason they’re out of work is because of immigrants have any desire to be rational. I don’t think I’d seen this quote from Martin Luther King until this month: “It is important for the liberal to see that the oppressed person who agitates for his rights is not the creator of tension. He merely brings out the hidden tension that is already alive. Last summer when we had our open housing marches in Chicago, many of our white liberal friends cried out in horror and dismay: ‘You are creating hatred and hostility in the white communities in which you are marching. You are only developing a white backlash’” I never could understand this logic. They failed to realize that the hatred and the hostilities were already latently or subconsciously present. Our marches merely brought them to the surface. How strange it would be to condemn a physician who, through persistent work and the ingenuity of his medical skills, discovered cancer in a patient. Would anyone be so ignorant as to say he caused the cancer?” It really seems like this “hey, don’t scare the racists” attitude is still disturbingly present today. Can we really be too surprised in a society where people insist that Dr. King shouldn’t be politicized?

Artist: Watson Mere
Anyway, I recently came across a list of points from Michael Wolff’s Fire and Fury that haven’t been discussed that much, and one of them is that Trump planned to lose the election and was horrified when he won. That makes sense, but I have to wonder how it fits in with his family and campaign staff colluding with Russia to get him elected. He said, “I don’t really want to be President,” and Donald Jr. and Jared Kushner said, “Sure you do!”? Still, we’re dealing with Trump, who’s remarkably inconsistent on many things. Is it that hard to believe that he did whatever he could to get elected, then realized he was in over his head when it actually happened, but his ego wouldn’t let him just resign? I’ve seen it questioned how Trump can be painted as both a total idiot AND a master schemer, but why not? There are many different kinds of intelligence, and maybe Trump being a successful scam artist is intelligence of a kind, but it’s not the sort you need to run a country. For one thing, I always have to wonder what his endgame is. What does he actually hope to accomplish with his travel bans, walls, and general fearmongering? Some of what he’s done comes across as directly contradictory. And when you’re doing things without considering the consequences beyond the most immediate ones, that seems pretty stupid to me. But then, that’s the way things often seem to go these days. The George W. Bush administration got the country into two wars with no real exit strategy. Climate change denial is promoted by those who don’t care about long-term consequences as long as they can make a lot of money in the immediate future. What do white supremacists really think will happen if they succeed in making the United States a nation of just white people?

My guess would be that they start fighting amongst themselves, declaring certain people not white enough, just as they frequently have historically. But then, I don’t see how you can believe in the superiority of white people and NOT be incredibly stupid; there’s just no basis for it whatever. I have to wonder at the tribalism involved, as it goes way beyond the subconscious racism that’s ingrained in our society. That’s obviously bad as well, perhaps worse in some cases (remember Dr. King’s identification of white moderates as more damaging to his cause than the blatant racists), but it’s easy to understand how it happens. Are the people who complain about immigrants taking jobs okay with it if another white man gets a job they think they should have had?

Getting back to Russia, I’ve seen it questioned why the Democrats are focusing so heavily on this. I agree it’s far from the worst thing Trump has done, but it’s also the one that seems most likely to lead to impeachment. I don’t think you can impeach someone for just being an ass, even if you really should be able to. Not that impeachment would necessarily help all that much, since that would just mean Mike Pence as President. Also, it’s weird how often the word “collusion” comes up nowadays. It seems like there’s often some term that just spreads around the media for some reason. Was anyone saying “weapons of mass destruction” before 2001? Maybe in certain circles, but it became omnipresent when I hadn’t heard it much if at all before that. That kind of thing is always fascinating to me.

1 Response to Racing in All Different Directions