There Are No Coincidences, But Sometimes the Pattern Is More Obvious 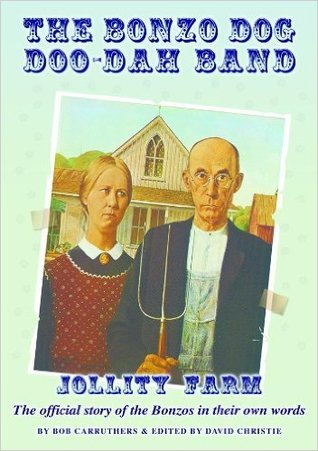 Jollity Farm: The Official Story of the Bonzos in Their Own Words, by Bob Carruthers, edited by David Christie – The Bonzo Dog Doo-Dah Band is one that I didn’t get into until later in life (well, okay, my thirties), but that definitely fit into my interests. This book tells the sometimes complicated history of the band, incorporating many quotes from the band members themselves, including a lot of information from interviews with the late Vivian Stanshall. It can be a little difficult to remember what the line-up of the band was at any given time; Stanshall was essentially the leading man throughout, but there were several members who joined back when it was still a loose, anarchic project but left when it started going in a different direction, and others came and went for personal reasons. Neil Innes was one of the later members to join the original line-up, but the fact that he was already a skilled musician made him emerge as one of the more prominent members once they started putting out albums. It started out as essentially a bunch of art students getting together and goofing around to make audiences laugh, playing mostly covers of old songs they discovered in music stores and using a lot of props. Members played instruments they knew pretty much nothing about, not to be confused with occasions when they played intentionally badly on instruments they were good at. Although much of this carried over to their albums, it sounds like a lot of their performance was visual, so it’s a testament to their versatility that the records are still funny without that stuff. The book points out how some of their releases lose the joke without the visuals, particularly “Music for the Head Ballet” and “Noises for the Leg.” Stanshall is a fascinating individual, sort of a mad genius type who was incredibly creative but also prone to bouts of extreme depression and often difficult to work with. There were interesting anecdotes about other members as well, like how apparently “Legs” Larry Smith came up with the nickname BEFORE learning how to tap dance. The story of the band ties into something I’ve thought about fairly often, that of whether silly and serious or chaotic and orderly can co-exist. As a lover of absurd humor, I’ve noticed that some things that seem totally random are hilarious, while others aren’t even remotely funny. I’ve come to the conclusion that there has to be a certain order to the chaos, that things that appear to just be out of nowhere generally have to have thought and work put into them to make sure they’re appealing; but it’s not like I can pin down how this is done. Still, the Bonzos’ dedication to the chaotic (especially Stanshall’s) perhaps made it a foregone conclusion that they wouldn’t last that long as a group. And there are times where I can still enjoy something even when I’m sure there’s a joke in it I’m really not getting. The book paid a fair amount of attention to how some of the Bonzos’ references to English pop culture really didn’t work well in the United States. In particular, I knew the title Keynsham referenced a radio commercial, but I wasn’t aware of just how much of it was parodied on the album. It’s never as funny when you have to have the joke explained, but I’ve also gained some extra appreciation for just how far they were willing to take the gag. There are anecdotes from the recordings of all their albums, and an appendix that goes through them one song at a time. As a book, I thought it was mostly just an overview; they could easily have gone into more depth on several occasions, and sometimes the order in which things were discussed was odd. As another Goodreads reviewer mentioned, “Could be better, but then it wouldn’t be as good”; you’d expect a book about a chaotic band to be somewhat chaotic itself. There were also a LOT of typos, although I don’t know if these were present in the original printed edition or a result of the formatting for the e-book version (which is what I read).