I think it’s about time I write another movie review post, and I’ll start it out by mentioning a few movies I watched a while ago but DIDN’T write about at the time. Due to improper Netflix queue maintenance, we ended up getting the notoriously long Lawrence of Arabia and Spartacus at the same time, and it was about a month before we actually got around to watching them. 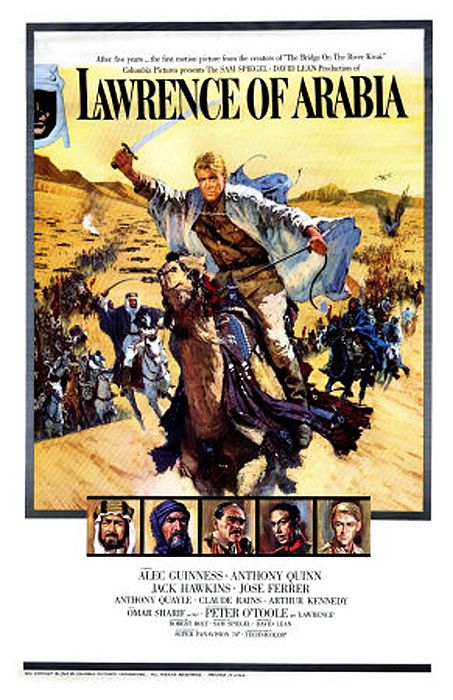 Lawrence of Arabia (and am I the only one who can’t hear that title without immediately thinking “British Beatlemania”?) was definitely a well-made film, but I can’t say it held my interest. I did watch the whole thing, but I couldn’t really tell you what happened beyond a basic overview. Considering how well-regarded it is, I’m a little embarrassed of this.

I found Spartacus considerably more engaging, but still couldn’t think of much to say about it. Loosely based on the slave revolt known as the Third Servile War, it was a rather inspiring story in that, while the revolt was ultimately unsuccessful, it was still a serious blow to the Roman state from an unexpected direction. It’s interesting that the Netflix sleeve singled out Peter Ustinov’s role as the owner of a gladiatorial school as particularly entertaining, because his part isn’t all that major, but it is accurate. One other minor aspect that stood out as weird was a mention by a Roman official of “the negro” to refer to Africans. I know media have to be evaluated in the context of their own time, but it’s not just that the term is offensive, but that it’s weirdly anachronistic, apparently not having been used until the fifteenth century. Since the Romans in the movie referred to other people by their places of origin (e.g., “the Thracian”), I’m not sure why they wouldn’t have done the same for Africans. It’s known that Kirk Douglas giving Dalton Trumbo full credit for the screenplay helped lift the blacklist on the writer, and that it was the only movie directed by Stanley Kubrick where he didn’t have complete control. It wasn’t long after we watched this that Kirk Douglas appeared on the Golden Globes, leading to backlash because it’s strongly suspected that he’d raped Natalie Wood. While searching for information on this, I noticed that this page includes a tweet by someone I went to college with.

7 Faces of Dr. Lao – I can’t help but be conflicted about this one, as it was enjoyable to watch, but at the same time it featured Tony Randall in yellowface as a comical, mystical Chinese man. It’s not the sort of thing that would likely go over well today (white actors still play Asian characters, but probably not with stereotypes that blatant), but while I obviously don’t know the intentions of the filmmakers, I don’t think it was intended to be offensive. Lao’s main mode of operations is to act silly and non-threatening so people underestimate him, and he’s shown to be capable of speaking non-broken English, the stereotypical character is really an act even within the story. The film is particularly known for its makeup, allowing Randall and Lao to take on multiple other characters, including Merlin, Pan, Medusa, a fortune teller, and even the voice of a snake. You can tell he’s having a great time doing this, too. The Loch Ness Monster makes an appearance as well. With his magical circus, Lao is able to thwart a plot by a tycoon to buy up the town before the railroad comes through, and help various other townspeople with their problems. One of these was to bring the newspaper publisher Ed Cunningham and widowed librarian Angela (played by Barbara Eden of I Dream of Jeannie fame) together as a couple, but it’s difficult to root for this when Ed is constantly asking Angela out and not taking no for an answer, totally disregarding that she’s still in mourning and that she might just not be interested in him. Overall, I liked it, but it’s important to go into it with knowledge of the offensive elements.

Demons – I’d previously seen Suspiria, a very atmospheric horror movie directed and co-written by Dario Argento. He also co-wrote and produced this one, but it has a very different feel, quite campy and ridiculous, albeit pretty fun. The plot involves the opening of a new movie theater in Berlin, which shows a film about demons possessing people, and then that starts to happen to the actual audience. It’s really pretty similar to zombie films, as the possessed shuffle mindlessly around and try to infect others, although it is shown that the demons live inside the people’s bodies. I’m not sure how much of the cheesiness is due to translation, but I have to suspect it was goofy in Italian as well. Still, I don’t know whether some of the particularly bad dialogue was intentional or not. The soundtrack included a lot of rock music from the time, including Billy Idol, Rick Springfield, and Mötley Crüe. 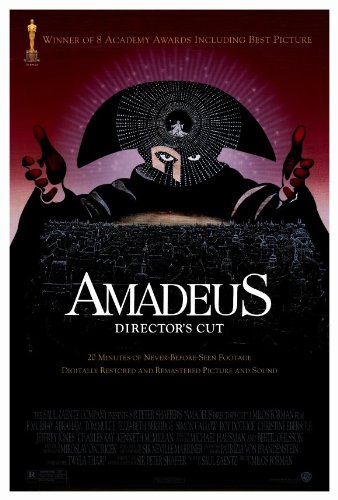 Amadeus – Another long one, but this is one that didn’t drag for me at all. It’s known to be historically inaccurate, there being no real evidence that Mozart and Salieri were rivals. It also presented Salieri as a mediocre composer, when he was quite renowned in his own time. The rumors had been around for a long time, however, probably fueled largely by how Salieri’s popularity declined pretty sharply after his lifetime, while Mozart is of course still incredibly famous. Mozart and his father were also said to have been contemptuous of the prominence of Italian musicians at the Viennese court. Also, Mozart’s early death led to some speculation that there was foul play involved. As early as 1830, Alexander Pushkin wrote a short play centering on Salieri being driven by envy of Mozart. The film, based on a 1979 play, goes with this same theme, being presented as a flashback narrated by an old Salieri who was institutionalized after attempting suicide to an oddly nonchalant priest. He laments the fact that, despite devotion to God and clean living, he never achieved greatness, while the rude, vulgar, and lecherous Mozart was a prodigy. Mozart also has a giggly laugh that Tom Hulce claims to have gotten from a director, but I don’t think he’s ever said which one. Salieri being chaste in order to obtain God’s favor is inaccurate as well; he was married, and there’s some evidence to suggest Caterina Cavalieri, the singer the movie’s Salieri admits to having lusted after but claims he never actually made advances toward, was his mistress. Even within the movie, it’s not entirely clear how much Salieri’s mediocrity is in his head, as despite Mozart’s greater fame and talent he remains a respected composer. There is the one scene where Mozart immediately improves on a fairly simple piece Salieri wrote, but to be fair it’s suggested he wrote it in somewhat of a hurry, and it’s played badly by the Emperor. Interestingly, the movie sparked a revived interest in Salieri’s work, although I don’t know that I’ve heard any of it. The exaggeration of the characters seems to be largely to emphasize the theme that life isn’t always fair, and talent isn’t necessarily a reward for a good life or even hard work (although the movie’s Mozart DID work constantly; it just didn’t take that much effort for him). The title, in addition to being Mozart’s middle name (albeit not, apparently, part of the name under which he was baptized), means “love of God,” and much of the conflict in the film is based on Salieri thinking God is mocking him through Mozart. I haven’t seen the play, but I understand that one key difference is that Salieri in the play confesses to having poisoned Mozart, while in the movie he considers killing him but ultimately doesn’t, his guilt over Mozart’s death being more of a figurative thing. There is an account of someone wanting to pass off Mozart’s Requiem as his own work, but this was Count Franz von Walsegg, not Salieri; and nobody really dressed up as the ghost of Mozart’s father.