I recently started playing Dragon Quest VIII, and I’ve made it as far as the hill near Ascantha where wishes are supposed to be granted, although I haven’t finished with it yet. While mostly functioning like other DQ games, there are some significant stylistic differences. One is that, instead of the typical top-down map view, there’s a moving camera instead, which takes a little getting used to. There’s also voice acting, not all the time but for cut scenes and key bits of dialogue, including before and after boss fights. The main protagonist never speaks, however; it’s sort of an RPG tradition. In terms of story, it’s interesting that it starts out in media res, and has you fight a battle before you really know what’s going on, with no introductory speech or anything. I guess it’s sort of like the beginning of DQ5 in that you’re more or less thrown into things there, but there your protagonist starts out as a kid. Here, your characters know the back story, but the player doesn’t until it’s explained in flashbacks and stray bits of dialogue.

Fortunately, the battles are pretty much the same as ever, although there are a few new techniques. 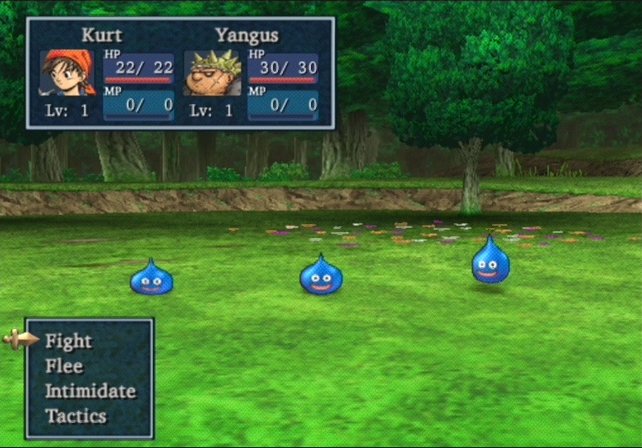 What’s interesting is that DQ9 promptly removed these innovations, probably because it was for a less advanced console (the DS instead of the PlayStation 2; the version I’m playing is on 3DS). It did retain the ability to increase tension and to distribute skill points into various categories when you level up, though. The hero is the only guard to survive an attack and curse on Trodain Castle, and now travels with King Trode, who’s been turned into a toad-like monster; and his daughter Medea, who’s now a horse. 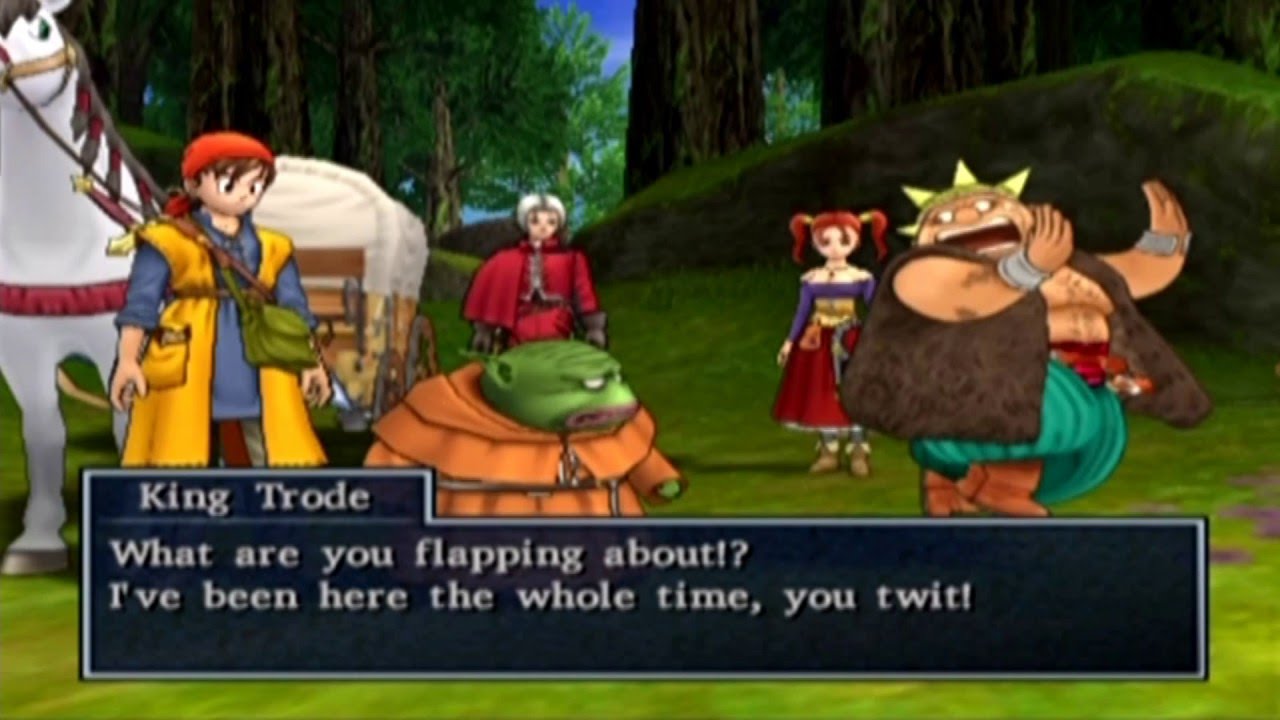 Also accompanying them is a tough and former thief named Yangus, who talks with a cockney accent. 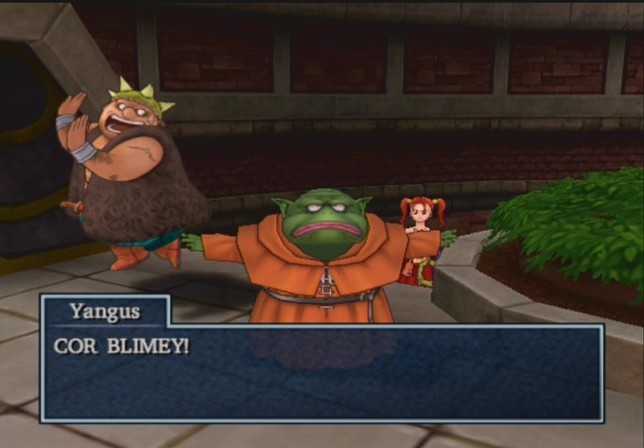 Actually, pretty much all the characters I’ve come across so far have British accents of some sort or other, the only exceptions I can think of offhand being the fortune teller and his daughter, who have an Eastern European dialect. I’m still pretty early on in the game, though, so I don’t know whether that pattern will hold. The game so far has the party chasing after the villain who cursed them, an evil jester named Dhoulmagus. As he’s a psychotic clown with a thirst for power, I have to wonder if he was influenced at all by Kefka from Final Fantasy VI. After all FF took from DQ, it’s only fair, right? While Trode and Medea journey with you, they don’t participate in battles. The quest so far has led to two other party members who do, however: Jessica Albert and Angelo. The former is a member of the noble family of Alexandria who wants to avenge her brother’s death, and the latter a roguish monk whose abbot was murdered by Dhoulmagus. One of the skills you can build up for Jessica is sex appeal, which is useful (apparently monsters have very human taste in women) but perhaps a little overly fan-service-y, especially considering that her character as portrayed in dialogue is rather serious and not flirtatious, at least as of yet. 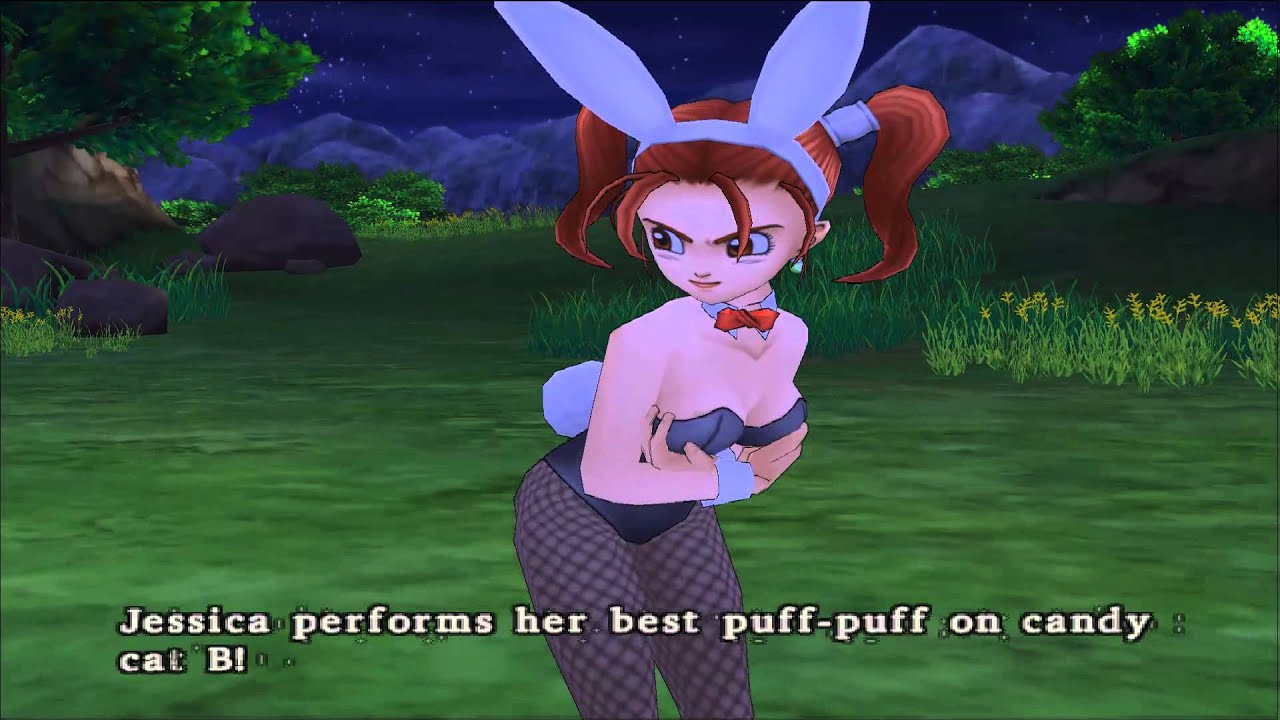 Angelo is kind of a jerk, the sort of person who gets away with lying and cheating because he’s charming, and he’s awkwardly hit on Jessica a few times. 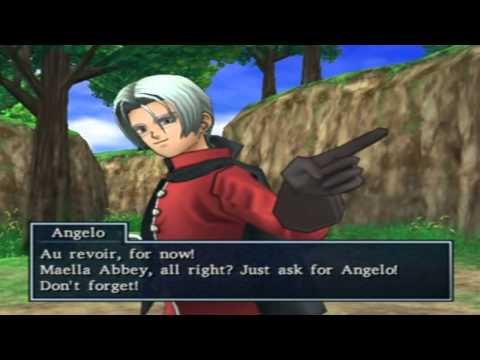 I’m hoping there will be some sort of redemption for him. It’s not too unlikely, as we’re shown that Yangus originally wanted to rob Trode and his companions until the hero saved his life. Besides, four party members are better than three. I suppose the other two people in the picture at the top of this post will join later on; I believe they weren’t playable in the PS version, but are here. Oh, and I can’t forget Munchie, the hero’s pet mouse, who is vital in retrieving a letter.

2 Responses to Quester vs. Jester