On Earth as It Is in Heaven

The Family: The Secret Fundamentalism at the Heart of American Power, by Jeff Sharlet – I think I first heard about the secretive fundamentalist Christian organization known as the Family or the Fellowship on Bill Maher years ago, and I found the idea pretty disturbing. They’re the ones who run the National Prayer Breakfast and the C Street House in Washington, and have contacts with a lot of powerful people. Sharlet, who basically went undercover to investigate the group, recounts the history and beliefs of the people involved. The founder, Abraham Vereide, was a Methodist minister from Norway who was vehemently anti-union and anti-communist. The leader at the time the book was written was Douglas Coe, who apparently died last year; I don’t know if his successor is known to the public. Both of these men have talked up powerful dictators, not necessarily agreeing with them but thinking their tactics of forming strong alliances and demanding complete allegiance are the way to go. Coe mentioned Pol Pot as a model, and he’s someone who genuinely persecuted Christians. They don’t follow any one particular denomination of even necessarily consider themselves Christians, but they believe the best way to live is to let God work through you. (Why can’t God do His own dirty work?) Their Jesus is one who has no problem with people getting rich on the backs of the masses, and will apparently forgive believers without their actually doing anything to earn it. It’s pretty much the complete opposite of what I believe, and not just because I’m an atheist; we’ve seen over and over that letting the powerful run things to suit themselves is generally bad for everyone else. While their contacts in American government are largely Republican, they’ll also ally themselves with Democrats; Hillary Clinton has spoken positively of them before. I don’t know whether they’re as much of a threat as Sharlet suggests, but there’s definitely a creepy atmosphere to their workings. 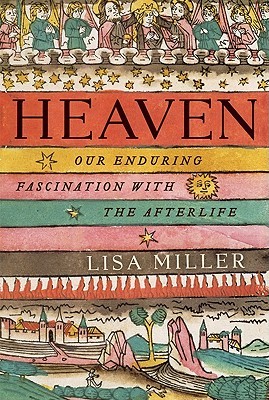 Heaven: Our Enduring Fascination with the Afterlife, by Lisa Miller – This was another book I’d heard about years ago and thought sounded interesting, although I don’t think I knew the title; my wife said she’d seen the author on The Colbert Report. Interestingly, Miller commented on Sharlet’s book, thinking he was overly alarmist but agreeing that more transparency for the Family would be a good thing. For this book, Miller interviewed a lot of different people of different faiths and did research into ideas about Heaven throughout history. She traces the basic concept to the second century BC, when the idea that martyrs for the Jewish faith under Greek persecution would go on to live with the angels gained in popularity. There were earlier precedents that led to this: the idea of God taking Enoch and Elijah to Heaven, the Zoroastrian concept of different afterlives for the good and bad, and the Greek concept of the soul. Still, it seems like, with some exceptions, the afterlife in Paradise was something that would happen in the future, after the end of the world as we know it. The book of Daniel speaks of a physical resurrection at the end of days, and Jesus seems to have embraced this idea and preached the Kingdom of Heaven as something that would soon arise on Earth. The immediate transition to Heaven was a later idea, but seems to be generally accepted in modern culture. The same can be said of Heaven as a place where you can hang out with all your deceased friends and relatives. There was a mention of some group that sells the idea of pets going to Heaven, specifically that there’s sort of a bridge where they’ll hang out until their old human companions join them, upon which they’ll joyfully run to meet them. It was presented in a corny manner, yet I couldn’t help feeling kind of choked up by the idea. Miller presents different opinions on whether Heaven is a physical place, and whether the descriptions are meant to be taken literally. Does the Christian Heaven actually have angels playing harps on clouds? Is the Islamic Paradise really full of streams of running water and beautiful women the faithful can have sex with? The idea of physical bodies going to Heaven has become much less popular over the ages. While an all-powerful God presumably COULD bring bodies back from dust, it’s much harder to imagine, and this has affected people’s ideas. Also, a generally higher standard of living on Earth (although of course not for everybody) has made some of the specific ideas about Heaven obsolete; we already HAVE wine that won’t get people drunk, for instance. There are, however, conservative believers in the major faiths who insist that belief in a literal, physical Heaven is vital. Miller even writes of interviewing David Byrne about the Talking Heads song “Heaven,” which presents Heaven as “a place where nothing ever happens.” Byrne says he intended it to be sarcastic, but Miller sees a certain appeal to it. Overall, Miller is pretty positive and non-judgmental about the various concepts of Heaven, even giving somewhat of a pass to the books that purport to be first-hand accounts of the afterlife that come off as shameless cash grabs. She isn’t entirely sure what she believes, but still takes comfort in the idea. 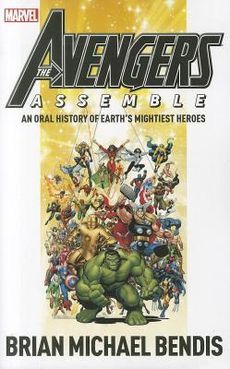 Avengers Assemble: An Oral History of Earth’s Mightiest Heroes, by Brian Michael Bendis – The conceit of this volume is that it’s presented as a series of quotes and conversations from the Avengers themselves, which is pretty interesting. There are also illustrations by several different Marvel artists. It’s a good overview of the team over the years, including a lot of information I didn’t know, although long-time comics fans might well know it. I didn’t know much about Black Widow, who’s only spoken of second-hand (within the fiction, she didn’t agree to be interviewed), as she was originally portrayed. Here, she’s presented as a mysterious vamp no one totally trusts.

In the movies, she’s still really attractive and a bad-ass fighter, but if this book is any indication, she’s been toned down a lot in other respects, to the point where she’s quite friendly with the other Avengers. Maybe part of that is due to her replacing the Wasp as the original sole female member of the team. 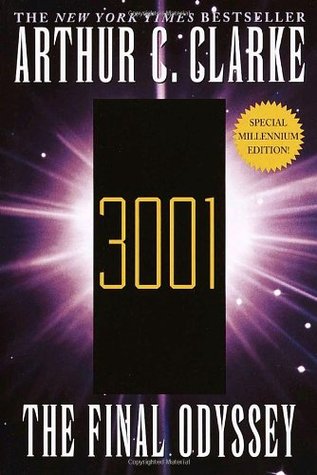 3001: The Final Odyssey, by Arthur C. Clarke – This one was released in 1997, when it was pretty obvious there weren’t going to be lunar colonies or manned missions to Jupiter by 2001. Clarke’s explanation for this is that each book takes place in a somewhat different universe, albeit one where most of the same characters existed and events happened, if not always at the same times. Anyway, this one is pretty creative. It has Frank Poole, who was killed by HAL, being revived in the thirty-first century. The society of this time has colonized many of the other worlds in the solar system, and Earth has a giant ring-shaped habitat suspended above it, accessible by space elevators. Computerized devices called BrainCaps are able to interface directly with the human mind. Religion has largely died out, although there’s still some general belief in a deity, and the word “God” is no longer in use. Poole manages to get in contact with Dave Bowman and HAL through the monolith on Europa, and learns that the aliens who installed the monoliths are planning the destruction of life on Earth, and the monoliths have to be neutralized. This plot is a minor part of the story, really; most of it is simply about exploration of the future world, and it’s probably better for it. The idea of the monoliths being used for destruction really seems to come out of nowhere; Clarke explains that it’s due to the destructive nature of humanity in the twentieth century, but it seems out of place with what we were told about their creators in the earlier books. There’s also a retcon in that faster-than-light travel and transmission are no longer possible in the series’ universe, apparently not even for star children.

1 Response to On Earth as It Is in Heaven