The Fabulous Fashions of Oz

I’ve examined the typical styles of Ozian clothing before, but I think I can come up with a few more thoughts about them. To begin with, The Patchwork Girl of Oz has a more thorough description of the Munchkin costume that Ojo wears: “blue silk stockings, blue knee-pants with gold buckles, a blue ruffled waist and a jacket of bright blue braided with gold,” along with blue leather shoes with turned-up and pointed toes. Unc Nunkie wears a blue coat with cuffs of gold braid and “boots with turnover tops.” Ojo’s shoes sound like the ones associated with Christmas elves, but I don’t know where they originated.

Shoes with long, pointed toes wore popular with the upper classes in the Middle Ages, but they didn’t curl up. It’s also the style on Pingaree to wear shoes that are “high at the heel and pointed at the toes,” and that “the points curled upward.”

The Silver Shoes had pointed toes as well. We also know that shoes with laces are known in Oz, as the King of Bunnybury and presumably Queen Ann Soforth have ones that need to be tied. (Tik-Tok suggests to the Nome King that Ann might have stopped to tie her shoe-string, even though the shoes she’s shown as wearing in the illustrations have heels.)

An interesting point brought up in Wizard that doesn’t seem to carry over to most other books is Boq’s comment that “only witches and sorcerers wear white.” This book describes both Good Witches as wearing white, but doesn’t state whether the Wicked Witches do. 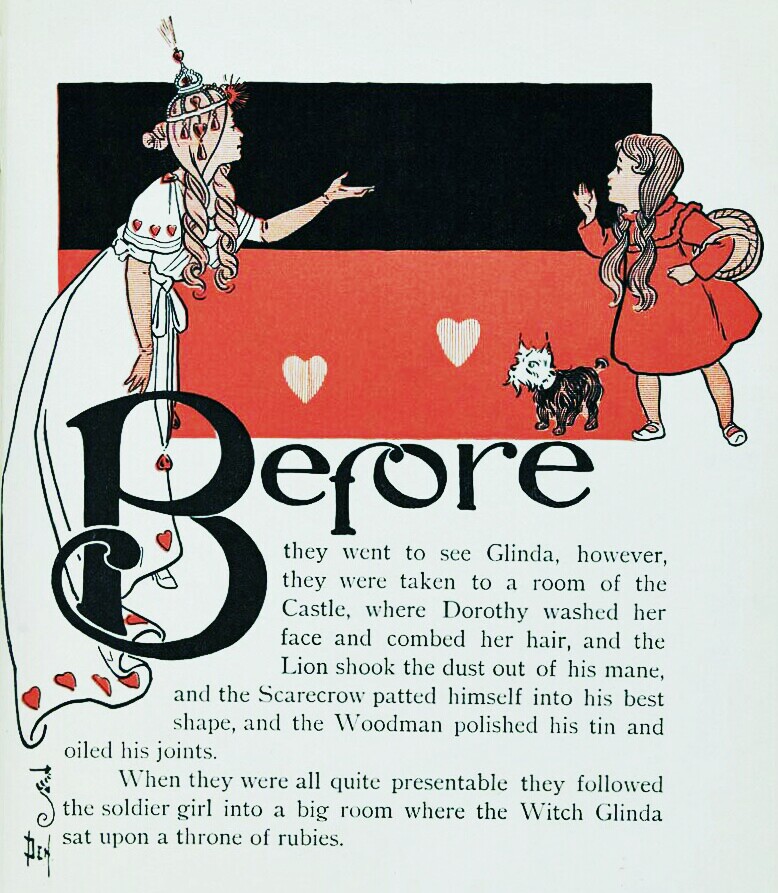 In Rachel Cosgrove Payes’s Wicked Witch, however, we’re told that “witches always wore something white, the magic color,” and the Wicked Witch of the South wears a white dress. When she goes out, she wears a maroon overdress to hide it. Trying to think of instances where someone living in Oz who wasn’t a witch or sorcerer wearing white, and I came up with three: Ozma and Dorothy wear “simple white muslin gowns” at the beginning of Glinda; Ozma, Dorothy, Betsy Bobbin, and Trot all wear white for the parade in Wishing Horse; and Prince Gules in Merry Go Round wonders whether he should wear a blue cape with a white crest or a white cape with a blue crest. For that matter, in Wizard itself, the green dress Dorothy receives in the Emerald City is actually white when not seen through green glasses.

A lot of the clothes we see in the series are of the national colors, showing an almost disturbing sense of conformity. The Scarecrow’s clothes are typically described as all blue, although for some reason Ruth Plumly Thompson gives him red boots and yellow gloves in Royal Book. I seem to also recall the gloves being described as white in some book, but I forget which one. Some prominent characters wear more variegated outfits, like the Wogglebug‘s dark blue swallowtail coat with yellow silk lining, white duck vest, and fawn-colored plush knickerbockers with gilt buckles; or Jack Pumpkinhead’s purple trousers, red shirt, and pink vest with white spots. 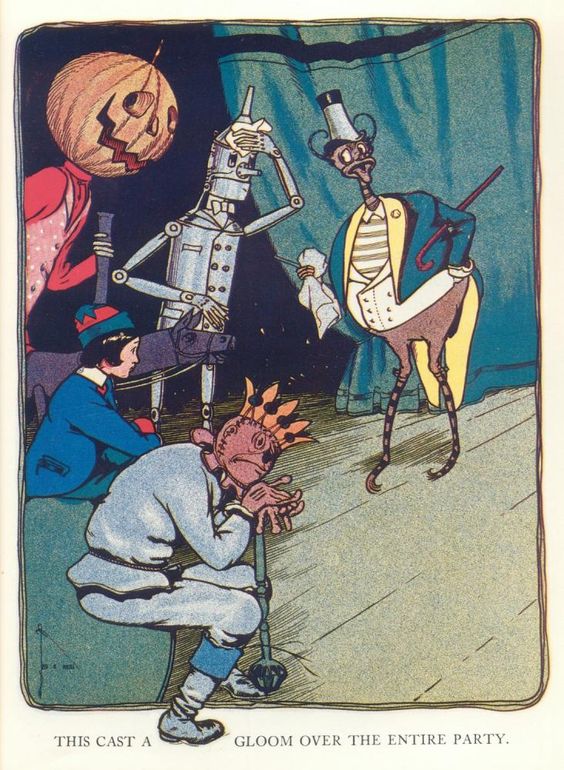 The former outfit was made by a tailor, and the latter is said in a Fred Otto story to have once belonged to a Horner magician. The Patchwork Girl is made from a quilt of many different colors partially because Margolotte thinks it will keep her humble, but instead Scraps is very proud of it. Queen Ann wears green when she sets off on her mission of conquest, despite the fact that her kingdom is in the Winkie Country.

John R. Neill often had the Americans living in Oz keep up with fashions from the Outside World, including having them wear flapper-style dresses during the Thompson years.

Eric Shanower continued this trend, as when he draws Dorothy with shorts, a short-sleeved shirt, and sneakers in Wicked Witch.

I guess they would be more comfortable for wandering around the country than dresses and such. It doesn’t appear that the native Ozites really pick up on such trends, though. There is one book, Neill’s own Wonder City, that deals pretty heavily with fashion. Here, Jenny Jump comes to Oz from New Jersey and starts a style shop, presented as a novel idea when, as one of her first customers states, “We have never had new styles in Oz before. When clothes wear out, we make others just like them.” Even though Jenny is from the United States, her styles don’t appear to be much like anything Americans would have worn at the time.

She makes sea-spray dresses at a Quadling’s suggestion, then later wears a dahlia dress with petals, a dress of silver fish scales, and a pink dress trimmed with soap bubbles. She creates a spun glass dress for Ozma, a cellophane suit for a Boxer, and whistling pants for Number Nine; and both she and Ozma sport gold-spangled dresses covered with question marks and X’s for both during the ozlection. Number Nine’s father receives a blue suit made of wool, rubber, silk, and wire that his goat can’t chew; while their mother gets a dress that changes color between violet and blue. There’s also a mention of a Quadling woman’s hair being changed from “pinned in a thick red biscuit” to “bobbed and bent in the latest style,” and Jenny herself sports many different hairstyles. In David Hulan’s Glass Cat, Becky Klein also aims to start a fashion revolution in the Emerald City, and she popularizes jeans. I really have trouble imagining an Oz where modern American styles are the norm, but it’s possible some ideas have been adapted over the years.

2 Responses to The Fabulous Fashions of Oz