Giving This Wrinkle in Time Some Credit A Wrinkle in Time – I saw this at the movies last night, and for the most part, I quite liked it. When I see a movie based on a book I’ve read, I generally can’t help doing a bit of comparison and contrast, even if I realize they’re never going to be quite the same. It’s been a long time since I’ve read the book, although I did recently catch up on some of the later books in the series; but there were definitely things that really stuck in my mind, and not all of them were in the movie. But then, that’s even true of Lord of the Rings, and those movies went on for hours and hours. What I think the film definitely did capture was the heart of the story, and the theme of Meg getting over her awkwardness and using her abilities. The three children were all excellent in their roles. The Mrs. W’s were played by bigger names, and while I don’t totally remember their personalities in the book, I don’t think Mrs. Whatsit was that much of a jerk. I looked it up, though, and it was established in the novel that she was considerably younger than the other two (albeit still eons old), so the filmmakers seem to have played with this, with Reese Witherspoon playing her as inexperienced and appearing younger than the character was originally described. Oprah Winfrey was Mrs. Which, and while I can’t say I’m a fan of hers, I couldn’t find any fault with her performance. She differed from her portrayal in the book, certainly, but a more accurate depiction might have been difficult to translate to film. The costuming was excellent, and the whole movie had a colorful, psychedelic look to it.

The Happy Medium’s cave was a dizzying collection of floating rocks, and the Medium had kind of an androgynous appearance.

There were some other changes that didn’t really affect the quality, like Mrs. Whatsit turning into a giant flying plant-creature (I decided while watching that “planta ray” would be a good name for it) instead of a rainbow-winged centaur.

I haven’t seen the 2003 made-for-television adaptation, but I understand the centaur looked terrible in that, so maybe the filmmakers were purposely trying to avoid a repeat of that.

We got a brief glimpse of Ixchel, but I missed Aunt Beast as an actual character. I can see why that episode wasn’t included, but it was still disappointing.

It does seem that they could have left in more explanation of how a tesseract worked, and its connection to dimensional physics. I believe there was a trailer that included the bit with the ant and the thread, but it wasn’t in the finished film. (Perhaps it could be considered the original string theory.) And regarding things seen in the trailers, the scene on Camazotz with all the kids doing everything in unison was quite well executed, but it strikes me as being weakened somewhat by the fact that it’s immediately followed by a bright, colorful setting. Camazotz is supposed to be eerily dull, isn’t it? Maybe that was considered dated, as I remember it being sort of a fifties-style dullness, but I think it would have still worked. Instead, Camazotz became an ever-changing world of illusions, an interesting take in its way but seemingly missing the satire. I don’t recall if the thing about everyone there offering the kids food had any basis in the book, but what it made me think of was the myth of Persephone and the tales of people getting stuck in fairyland because they ate the food there. As it is, however, the point just seems to be that the food is an illusion as well, not that it’s a trap in and of itself. I only vaguely remember the man with the red eyes (also known as the Prime Coordinator) from the book, but the movie changes him from coldly disturbing to a combination of Willy Wonka and Sergeant Pepper, still creepy but in a very different way. 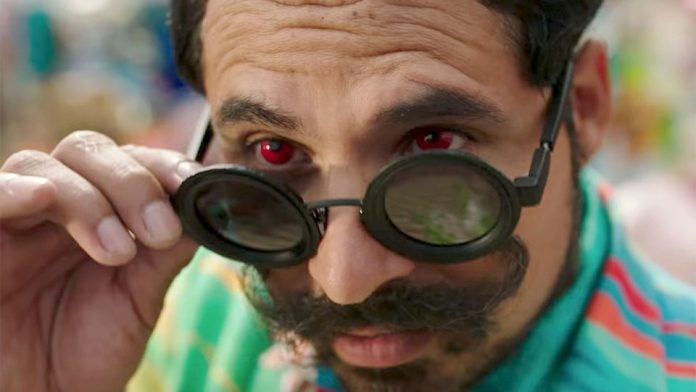 On the other hand, I liked the encounter with IT and Evil Charles Wallace. One other thing I noticed right away was how, even though the book was first published in 1962, they referenced things that weren’t around then from the very beginning. Madeleine L’Engle’s timeline for these books was also quite loose anyway, though, and there was no particular reason why it should have been a period piece.