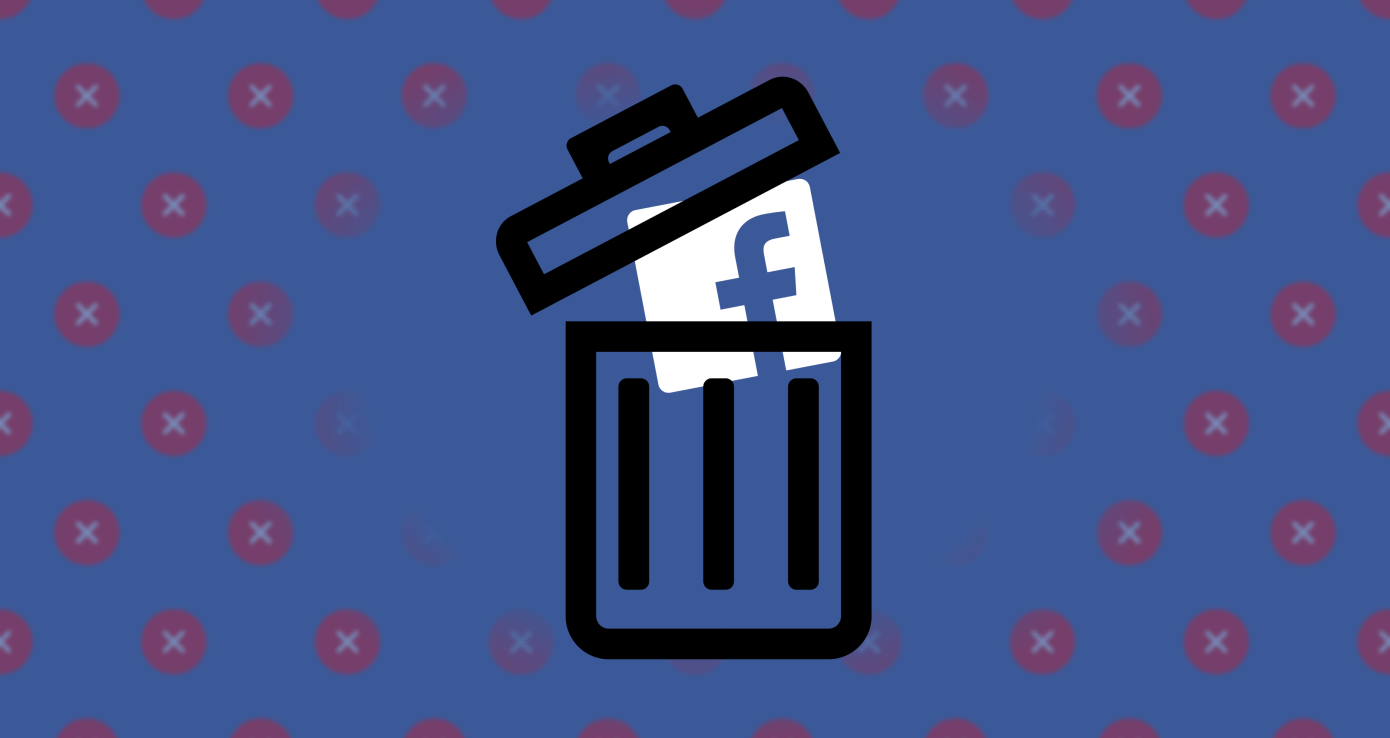 I don’t plan on deleting my Facebook account. Yes, I’m bothered by how much data they have on me, but I’m also lazy.

And I’m not sure how much of it can really be used in a malicious way. Maybe it can, but I’ve always been pretty open about my beliefs and opinions; and try not to be that open about my address or where I work, although someone could probably find it out pretty easily if they really wanted to. 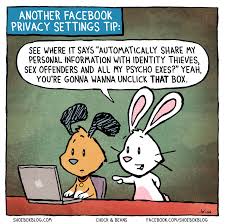 If I were going to stop using it, it would be more likely to be because it seems like it’s confusing on purpose. They keep changing the interface, and even when I’m used to it, it’s too busy and has too much irrelevant content. I have no idea why anyone would want their timeline NOT in chronological order, but Facebook not only does that, but often resets to that even when I change it. That seems to be pretty common with social media these days, but at least other ones have a simpler appearance. I have my issues with Twitter, but I’m more likely to look at it when I have a spare moment, because it’s more likely I’ll come across something actually interesting at a brief glance. But it seems like I get more reactions from other people on Facebook than other networks, probably partially because it’s the default online application for people who don’t generally use them. I’m not sure why, considering how confusing it is, but it has the brand recognition. My preferred online medium is my blog, but I’ll admit that I don’t check on other people’s blogs as often as I feel I should. It’s weird to think of how the Internet has become increasingly homogenized over time. When I first came online, people tended to make their own web pages. Many of them were terrible, but they tended to be at least somewhat personalized. Then blogging became a major trend, and that was somewhat less personalized because it had a standard format, but considerably easier to update and find out that other people updated. Social media platforms really aren’t particularly personal at all; your page is basically the same as everyone else’s, and your updates are mixed in with other people’s. Sometimes that can be advantageous, but even though you still CAN write longer entries on these platforms (well, not Twitter, unless you do that confusing threading thing), or at least link to them, it seems that people generally don’t. There are also a lot of straight reposts, which would often be more interesting if people included their own thoughts along with them, but to be fair I usually don’t either. There’s a lot of stuff worth sharing, but I also want to provide my own thoughts. I guess that’s what is now commonly called content creation, a term I find obnoxiously vague. But then, I also know a lot of people don’t really like to write.

I’ve been looking at some articles on how Russian operatives and their ilk used data and advertising to influence the elections, and part of me doesn’t really understand why it worked. Basically, they targeted people based on their interests and beliefs. And while a lot of it was aimed toward conservatives, there was quite a bit on the other side as well, including fake accounts purporting to be associated with Black Lives Matter and other social activism. They’d start out pretty low-key, then eventually start spreading false rumors, largely about Hillary Clinton. I must say, while the issue as a whole is pretty serious, I can’t help but find it funny that there was a Russian-owned organization called Heart of Texas.

And some of them stuck, even among liberals. The best explanation I’ve seen, which I came across on this Twitter thread, is that it relies on the reptilian brain, which seems like an insult to reptiles. If you see something designed to produce a visceral reaction, it will stick with you even if it’s not true. That’s fair. I mean, I try not to fall for scams, but in truth I’m more likely to immediately believe what I read, unless there’s some signal otherwise, like source I know I can’t trust or the use of suspicious keywords, like “deep state” or a mention of Satan. 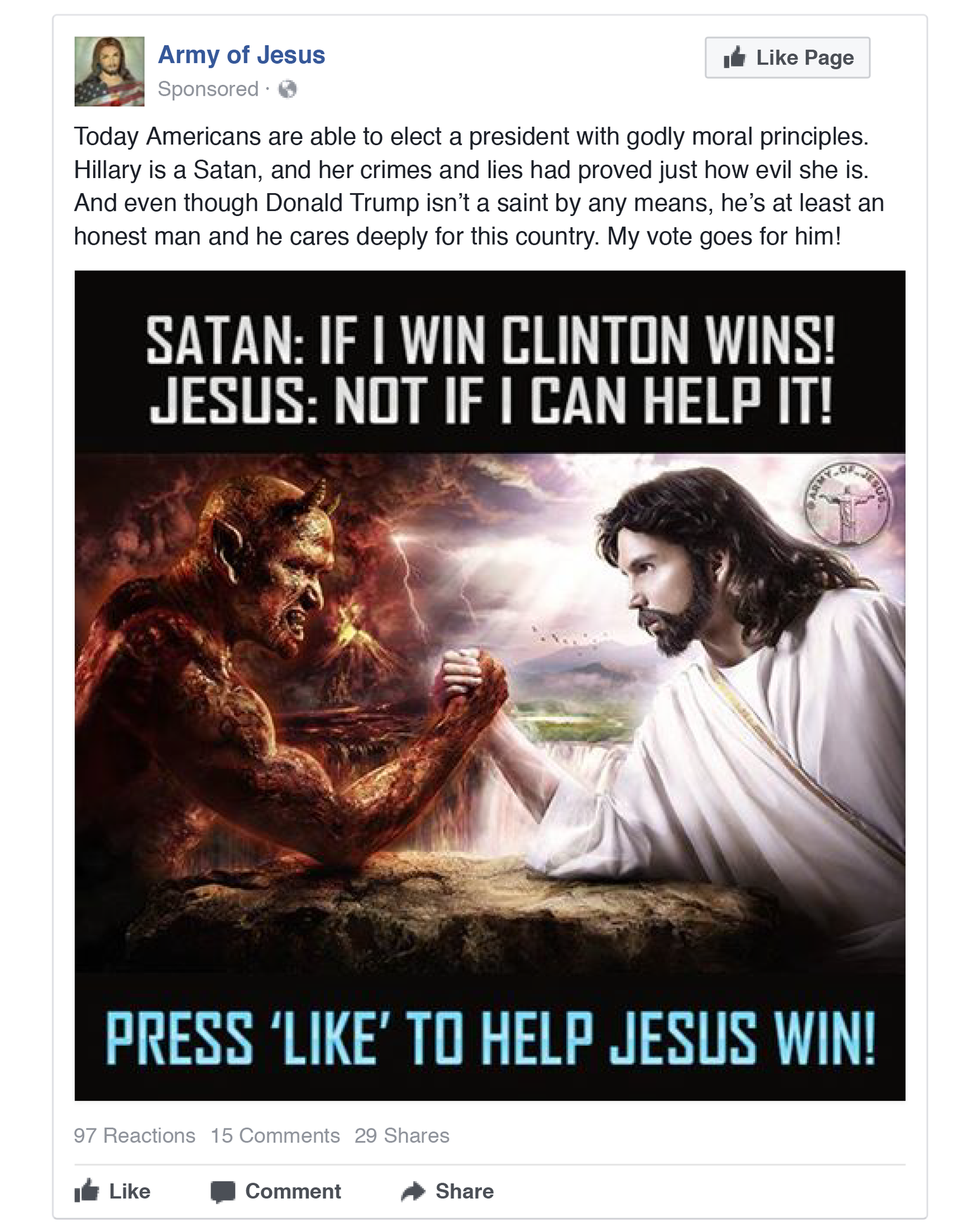 If the Lord of Evil can’t even get his preferred candidate elected, why are Christians so terrified of him? He must have forgotten about the electoral college.
Now, I’ll often reevaluate and immediately realize it is false, but I’ve certainly temporarily believed some things that turned out to be utterly ridiculous. And I guess that leads to bad association, like even if you know the PARTICULAR rumor about Hillary is a lie, you still get the impression that she’s shady. What’s strange to me is why any of this would work in Donald Trump’s favor, when there are even more allegations about him. But then, deciding not to vote because both candidates are terrible can be a major boon to the one you support less. Remember Bernie or Bust? Apparently a lot of that was driven by Russian bots, too. Ultimately, it’s not going to work unless you’re already somewhat on the desired side, which makes me wonder just how much it really matters. Stuff about Muslims and Mexicans sneaking into the country isn’t likely to affect anybody who didn’t already fear these sorts of people. Perhaps the significance is overestimated, because if people who believed such things didn’t have Russian bots and Fox News, they’d turn to other like-minded sources. The desired effect doesn’t seem to be so much trying to change minds as it is convincing people to vote or not vote, which is often what ultimately matters in an election, if perhaps not so much for public opinion in general. I mean, Trump did and still does have a low approval rating, but he still won. It’s fiendish in its subtlety.

One article I came across in the same Twitter thread was about how social media make people upset, which I can buy to some extent, although I don’t know that it’s any worse than any other social interaction in that respect. This Forbes article reports that a lot of it is based on comparing yourself to others, which leads to social isolation. I’m not saying stuff I read on social media never makes me jealous, but it seems like much of the time the people I follow have lives just as dull as mine, or else do things I’m not interested in, like going to gyms or bars and having kids. You know when being surrounded by people did make me feel isolated? In college. The thing is, I had friends, which is more than you could say about high school, when I pretty much never talked to anyone outside class and some people seemed to genuinely dislike me. But it seemed like all those friends had other friends they liked better, and it was rare that anyone sought me out. I was left with the impression that everyone else was having more fun than I was, even if on a rational level I knew that couldn’t be true. I still feel that way sometimes, but not as much as I did then. While I haven’t read it and don’t know that much about her, Mindy Kaling’s book title Is Everyone Hanging Out Without Me? is a sentiment I very much identify with. But on the Internet, I guess I don’t get as much of the sense of being excluded. And could people please stop saying your friends on social media aren’t real friends? Poking someone on Facebook doesn’t involve your actual finger, either (not that I’ve ever understood the point of it regardless). That said, I will admit that I’ve always felt that some people use the term “friend” way too loosely, and the term’s use on the Internet is kind of an extension of that. What you mostly have online is an audience, and that’s not a bad thing. And I don’t see that I’m any less myself on the Internet than in person anyway, and I’m probably slightly less awkward online. You CAN create a fake identity, but that doesn’t mean that’s what everyone is doing. When I see stuff about how Internet usage makes people less connected with their neighbors, well, I never felt connected with my neighbors. If you never had a social life, electronic media can’t interfere with it.