I recently read Ruth Berman’s Dunkiton Pamphlet on Gnome Matters, including a history of gnomes, touching on their use in the Oz books. 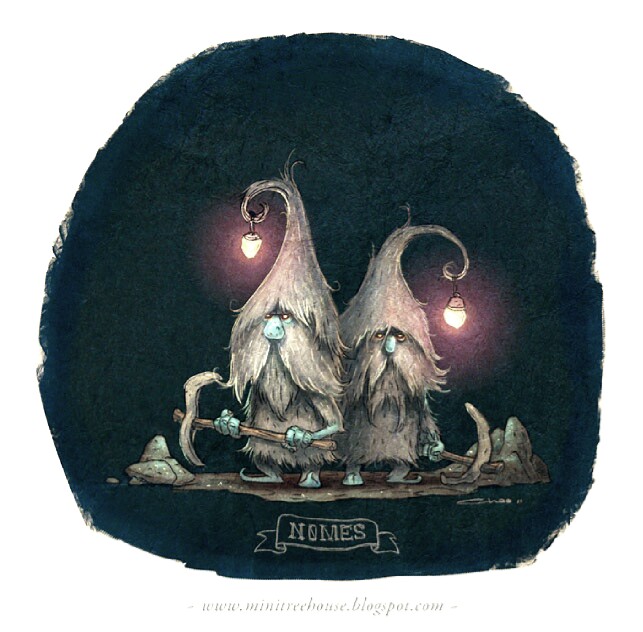 I’ve written about this topic before, like how the name might well have originated with Paracelsus, who categorized the various beings of folklore into the four classical elements. The gnomes, as earth elementals, lived underground and could move easily through earth. L. Frank Baum’s version of the Nomes (as he spelled the word) as miners and craftsmen in an underground kingdom full of precious metals and gems was part of popular culture by the time he used it. 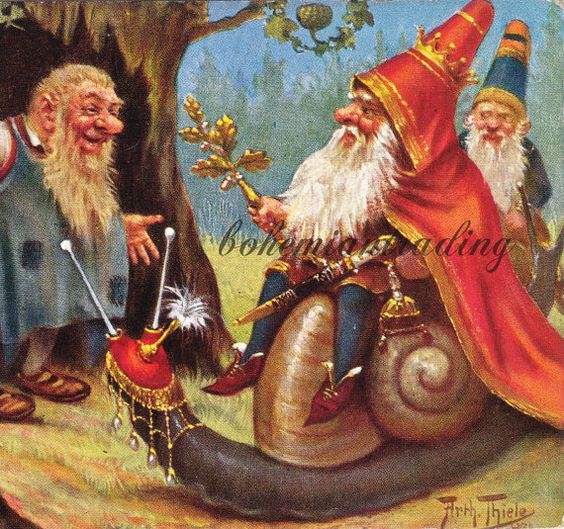 Picture by Carl Robert Arthur Thiele
The article mentions a few different operettas from the nineteenth century that use the Gnome King as a character. Edward R. Blanchard’s “Number Nip” associates the Gnome King with the German and Czech character Rubezahl, as well as with the fairy tale of Rumplestiltskin. The other fairies plot to stop him from changing form in order to fool people, which can be accomplished if he falls in love. In William Brough’s “The Gnome King and the Good Fairy of the Silver Mine,” the Gnome King is a demonic being who has to marry a woman who is only attracted to his riches every fifty years. To that end, he takes over a silver mine from a fairy in order to bankrupt the king and marry his daughter. He also lives a second life as a Russian prince. Eva Katharine Gibson’s Zauberlinda, the Wise Witch, which is thought to take some influence from The Wonderful Wizard of Oz, uses the Gnome King as a character before Baum would do the same. 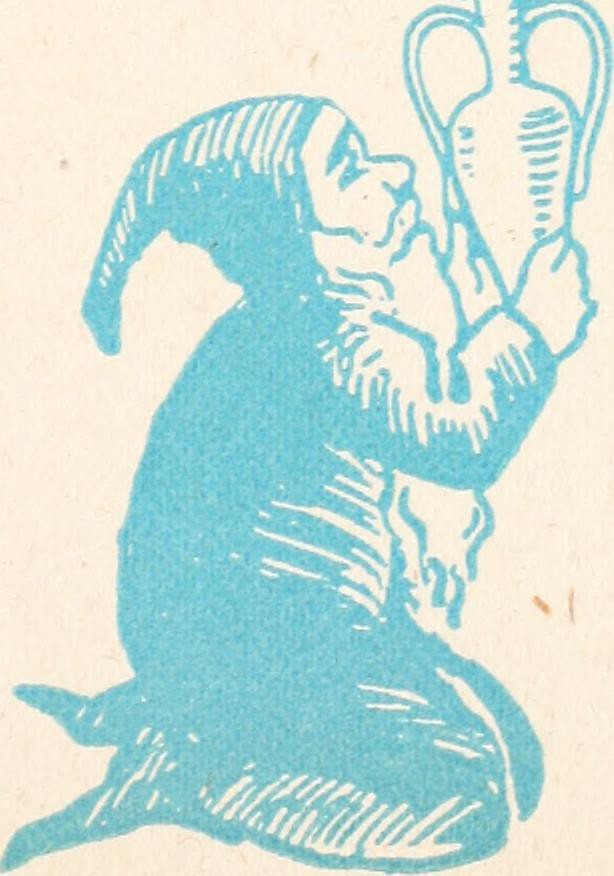 This king, Goldemar, offers riches to Annie’s father in exchange for her staying in his subterranean kingdom and marrying his son, although she manages to escape.

There seems to be a general theme of Gnome Kings wanting to get married or force others into marriage, likely a reference to how Paracelsus wrote that elementals could obtain souls by marrying mortals. The Nome King in the Oz books never does this, although he did have a romance with Polychrome in the stage play The Tik-Tok Man of Oz. He did maintain the role as a trickster and a magician, and of keeping surface dwellers prisoner. Isabel Johnston’s The Jeweled Toad, a 1907 book illustrated by W.W. Denslow, has helpful gnomes ruled by a Fire King.

That seems to be mixing elements, but a kingdom with a lot of smiths would make use of fire. Baum’s Nomes appear to have some resistance to fire, as they keep hot coals in their pockets to light their pipes. And through a Google search, I found a 1917 story by Julia Brown called “The Three Threads” with a friendly Gnome King as well as a character named Zurlin who doesn’t appear to have any connection to Baum’s Zurline.

There’s some variety in Nomes (and Gnomes) even in works specifically tied to Oz. Eric Shanower gave a talk where he posited that the Gnome King in The Life and Adventures of Santa Claus, who has children, is a different kind of being from the genderless Nomes of Oz, and his drawings of the Santa Gnomes look quite a bit different as well. I prefer to think they’re the same, but there is a valid case to be made for Nomes not reproducing, and not simply because their clothes don’t leave much room for genitals. It’s possible that they’re just born of the earth or rock itself, like how Santa says Necile came into existence fully-grown when a tree needed tending. J.L. Bell has also raised the possibility that the Gnome King’s children aren’t necessarily Gnomes themselves. Paracelsus wrote of elementals being both male and female, the female gnomes being called gnomides. Since I tend to go along details introduced in non-canonical Oz books as long as they’re not TOO far outside what Baum established, I generally proceed from Sherwood Smith idea that female Nomes exist but are seldom seen, and Ruggedo has a son, although we still don’t know the exact nature of Nome reproduction. According to an Emerald City Mirror story, Kaliko has a son named Kalamine. It’s been suggested as well that the Gnomes who try to steal the Turn-Style in John R. Neill’s The Wonder City of Oz, who dress in red and green instead of gray and have an odd fondness for warts, aren’t the same as the standard Nomes, but the fact that they’re knocked out by eggs indicates to me that they probably are, perhaps part of an isolated community with unusual fashions.

Joe Bongiorno’s Royal Timeline of Oz mentions a few other varieties and relatives of Nomes. Frank Joslyn Baum’s short story “Jimmy Bulber of Oz” has the tiny Quar, described as “Ruler of the Nomes of Oz.”

Despite the spelling, it’s clear these aren’t the same as the underground Nomes, as they’re described as “mischievous little people who lived hidden in the curled-up leaves of the forest trees.” Philip John Lewin’s Witch Queen introduces Rock Nomes who are actually made of rock. The fairy witch Enilrul claims to be responsible for their form, and she says even the Nome King has no use for them. Bucketheads tells us that fire fairies are a sort of female Nomes who tend the forges and prepare food.

The Gold Panners in Gina Wickwar’s Hidden Prince, who obtain gold from Bonanza Creek in the Munchkin Country, describe themselves as cousins of the Nomes.

The Delves from Ruth Plumly Thompson’s Purple Prince, the Goblins from Greg Hunter’s Enchanted Gnome, and the Knarls of Margaret Berg’s Reading Tree are also said to be related to Nomes.