One type of being that’s quite significant in Sayantani DasGupta’s The Serpent’s Secret is the Rakkhosh, a sort of human-eating monster that usually speaks in rhyme. The book also associates them with black holes, presumably an invention of DasGupta’s, although Wikipedia mentions a Roger Zelazny story where they’re living energy fields. They’re pretty common throughout Indian mythology and folklore, and like many such creatures, there isn’t necessarily any one definition that everyone agrees on. They’re known as Rakshasas in other parts of India and nearby countries, and are sometimes identified with Asuras, lesser deities that are often in conflict with the Devas.

Are they demons, ghosts, ghouls, or ogres? Well, any or all of those, depending on the story. They tend to be at least somewhat humanoid in shape, but with fangs and claws. They’re also often shape-shifters or illusionists, taking various human and animal forms.

There’s an origin story that the Rakshasas sprang from Brahma’s breath (or maybe his foot) when he was sleeping, and immediately started trying to rip him apart. When he cried out for help, Vishnu banished the monsters to Earth, and they got their name from Brahma’s cries of “Rakshama!”, Sanskrit for “Protect me!” Ravana from the Ramayana is considered a Rakshasa, as are his subjects. They’re known to desecrate graves and interrupt sacrifices. In fairy tales and bedtime stories, the monsters often warn of their presence with the rhyme, ” Hau, Mau, Cau,….Manusher Gondho Pau,” the latter part of which means, “I smell a human.” It’s obviously pretty closely related to the “fee, fi, fo, fum” of the giant in “Jack and the Beanstalk.” The creatures are also sometimes said to not to be able to enter a place unless you invite them in, a trait common to some vampires. Obviously, though, they try to trick people in order to receive invitations. And like vampires, they’re said to be most powerful at night. One female Rakshasi who plays a significant role is Putana, who was sent by the young Krishna‘s evil uncle Kamsa to kill him, and tried to do this with poisoned breast milk, or possibly poison smeared on her breast. The infant Krishna killed her, although there’s at least one variation on the story where Putana reforms. 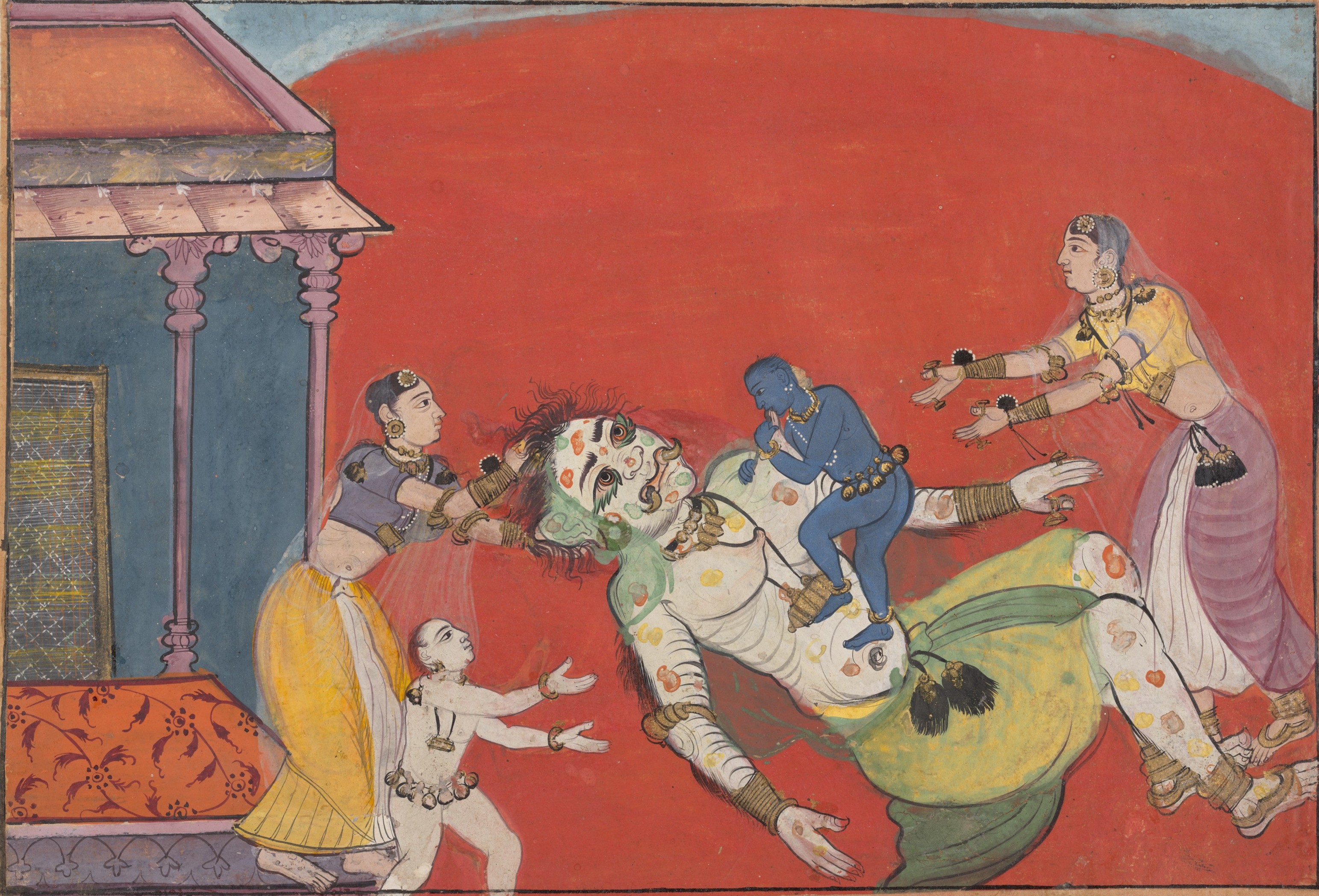 The Pandava hero Bhima is credited with killing several different Rakshasas who were terrifying nearby humans.

There are even a few cases where Rakshasas become heroes, although they’re much more often evil. A Khokkosh is a smaller version of a Rakkhosh, at least in Bengali folklore. The demons have spread from Hinduism into Buddhism and Jainism, and the latter apparently regards them as peaceful beings. In Dungeons & Dragons, Rakshasas are otherworldly monsters that are capable of changing form, but usually take humanoid form with the heads of tigers and hands with palms on the backs.

This version of the Rakshasa made it into the first Final Fantasy, which borrowed a lot of its monster names from D&D. Due to limited space, many of the names were shortened in the original English translation, so they were called ManCats.

2 Responses to Rakkhosh and Ruin