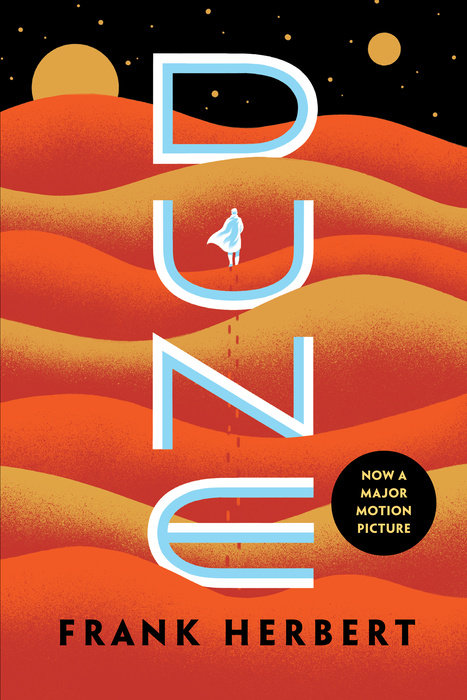 Dune, by Frank Herbert – This was a book I’d heard referenced a lot, but really didn’t know what to expect aside from a planet with sandworms. I’d never seen any of the movies or anything. I didn’t love it, but it was definitely interesting, with a lot of world-building. It takes place in the far future, in a society that has colonized many planets, but officially no longer utilizes artificial intelligence, which seems like it would make piloting spaceships difficult. It has its own religion and a noble class system. I would have liked to have seen planets other than Arrakis, but I guess that would have been outside the scope of the story. It was, after all, inspired by experiments with agriculture in the desert. Another interesting bit of trivia I learned was that the original publisher was Chilton, much better known for car repair manuals. I had to return it to the library a few times, and there were plot elements I had trouble keeping track of anyway. I couldn’t necessarily summarize it very well, but I still liked reading it. The main character is Paul Atreides, also known as Muad’Dib, and his rise to power as a charismatic leader. One rather obscure reference to the book that I was familiar with was how, in the Earthworm Jim cartoon series, Peter Puppy would recite the Litany Against Fear to try to keep from turning into a monster. I didn’t know what it was referencing at the time, but I did find out in the intervening years. And there was that Futurama episode where an addictive substance turned out to be the waste product of a giant worm. Something I’d like to address in the future is the development of sandworms in fiction; I think the first time I saw them was in Beetlejuice, and that was likely inspired by Dune. Apparently they were inspired by stories of the mythical Mongolian Death Worm.

Rosemary and Rue, by Seanan McGuire – I’d read the first two InCryptid novels, and this was an earlier work by the same author, the first book in the October Daye series. There are some clear similarities between October and Verity Price; they’re both bad-ass women who are a bit out of place in their societies and surrounded by enemies. While the other series obviously deals with cryptids, this one is about fairies and their intersection with the human world, utilizing a lot of traditional fairy lore to create its own universe. October is a changeling, the daughter of a fairy mother and human father, who used to work as a detective. She’s drawn back into both her old career and world when another fairy, the Countess Evening Winterrose, is murdered and she’s put under a geas to find the killer. Faerie is a world of complex politics and prejudices, where it’s never clear whether you can trust anyone, even old friends. One aspect I found interesting and amusing is that fairies curse with the names of plants. I’ll definitely want to read more of this series when I’ve finished some of the stuff I’m currently working my way through.

1 Response to Spice and Sprites