Food and Cheer Over Hoarded Gold

I saw two old animated specials last night that were quite different, although I guess you could say that Garfield and Bilbo Baggins both have a similar desire for food and comfort. 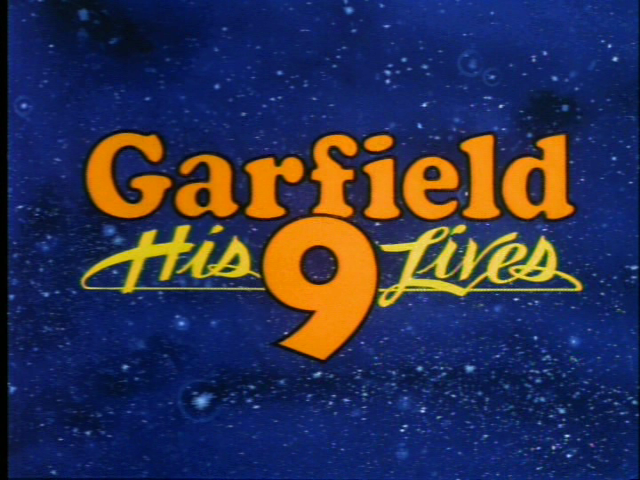 Garfield: His 9 Lives – This 1988 special, based on a book from 1984, showcases several different art styles in recounting Garfield’s seven past lives, as well as his current one and one in the future, treating them as different incarnations. I haven’t read the book, but I understand that six of the lives were adapted directly from it, while the other three were new. The one where Garfield reverts to a feral state and probably kills an old lady is, not surprisingly, one of the ones that was replaced. Another, “Babes and Bullets,” with Garfield as hard-boiled noir detective Sam Spayed, was made into a separate television special; they show some clips from it at the latest Kevin Geeks Out. Even without the darkest segment, the special is still pretty heavy in spots for a Garfield cartoon. And in other bits, it’s just a bunch of lame, obvious jokes. There are some real mood swings here. After a live-action bit showing God creating the first cat, “Cave Cat” has a fanged version of Garfield being domesticated by a caveman in the stone age. It’s very slapstick, with the typical cartoonish portrayals of the stone age: broken English, lots of clubbing (of the hitting variety, not the dancing one), and current animals given a prehistoric makeover. The first dog, Big Bob, is a giant, partially reptilian version of Odie who accidentally kills Cave Cat while trying to play fetch with an entire tree. 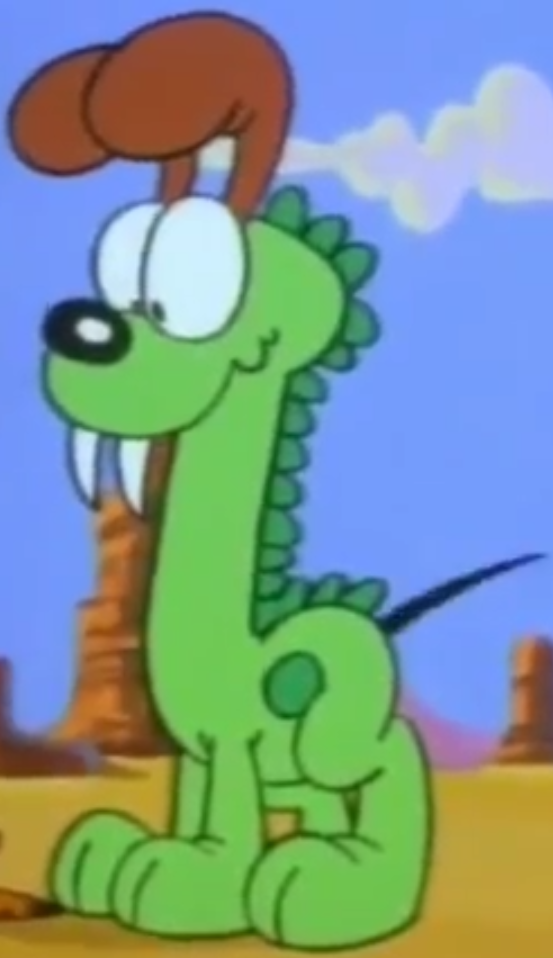 There’s also a fire-breathing mouse. In “King Cat,” a cat who looks just like the regular Garfield is the favorite pet of a very dim Pharaoh whose brother is trying to assassinate him. While the cat initially loves his life of ordering around dogs and tormenting pyramid builders, when he learns that he’ll be buried with the Pharaoh when he dies, he becomes actively involved in trying to preserve his master’s life. Since he doesn’t recognize dynamite (as, of course, it hadn’t been invented yet), the Pharaoh does die, but Odie rescues the cat from the tomb. In repayment, however, cats become the slaves of dogs. The third segment, “In the Garden,” is very bizarre and psychedelic, both in its look and story. While based on the Garden of Eden story, the girl and her orange kitten (basically Garfield drawn cuter and without stripes) decide not to give in to temptation.

Another new one, “Court Musician,” makes Garfield the blue-furred pet of George Frideric Handel (Garfield calls him “Freddie”), who has to help his owner write a new concerto. His third movement turns out to be the first jazz music. The very brief “Stunt Cat” makes the sixth incarnation a stunt double for Krazy Kat, and has a bunch of bricks dropped on him. This was before “no animals were harmed” became standard. “Diana’s Piano” is a very bittersweet segment that made Beth cry as a kid, and still does now. This incarnation, Diana, is more distinctly different from the regular Garfield than any of the other lives: white-haired, female, and not at all anthropomorphized.

The story is narrated by Diana’s owner Sara, who receives a kitten and starts piano lessons on the same day. Diana loves sitting on the piano while Sara plays, and eventually dies there years later. It’s quite unexpectedly sad for an overall tongue-in-cheek special. The opening bit has Garfield say this was how he developed a love for music, even though this was AFTER the life where he invented jazz. Where’s the story editor when you need them? In the seventh, “Lab Animal,” Garfield is drawn to look a lot like Oliver from Oliver & Company.

He’s used in lab experiments, but eventually escapes and manages to avoid notice because he turns into a dog. The eighth life is the current one, showing Garfield’s birth at an Italian restaurant and his adoption by Jon, his mother having previously been introduced as a character in Garfield on the Town. It also retcons Odie into another pet Jon buys to keep Garfield company, leaving out the whole Lyman plotline. Finally, in “Space Cat,” Garfield and Odie (the latter first as a computer and then a series of clones) attempt to survive in space, but are blown up by nasty aliens.

At the end, Garfield pleads with God because he didn’t think he was given a fair chance in his last life, and God not only agrees but gives both Garfield and Odie another full nine lives. He says this is because the computers are down and He doesn’t know which life Garfield is on, but He’s then revealed to have feline features Himself. 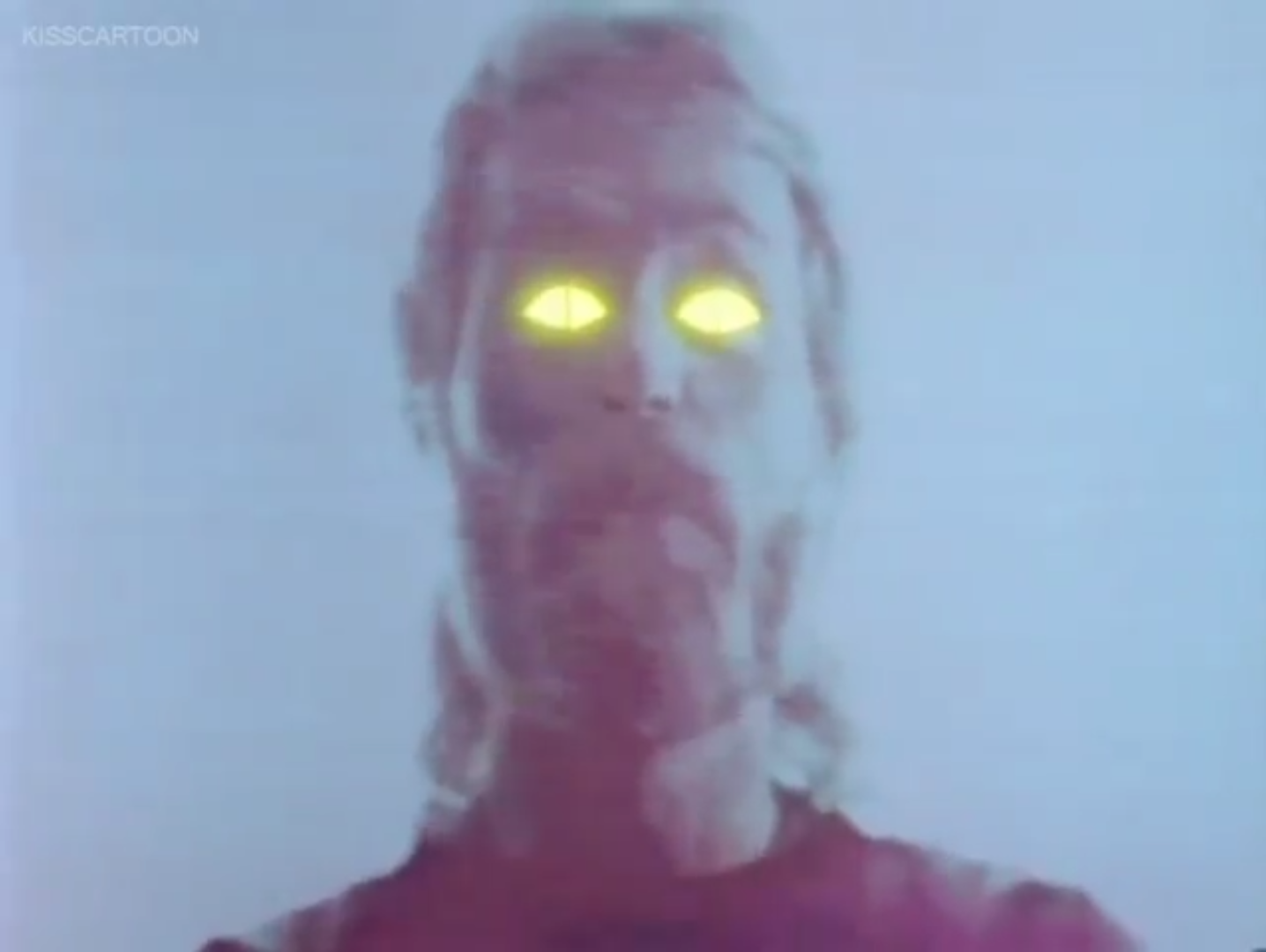 It’s interesting that only four of these vignettes actually show an incarnation of Garfield dying (“Cave Cat,” “Diana’s Piano,” “Stunt Cat,” and “Space Cat”); the others just imply it happens eventually.

The Hobbit (1977) – I saw this Rankin-Bass made-for-TV adaptation when I was a kid, but it’s been some years and three big-screen versions since then. I think it mostly holds up. The animation is somewhat limited, but the backgrounds are quite detailed. The style was somewhat reminiscent of the animated Watership Down, which came out in the following year. The line readings were a little flat at times, but that might have been hard to avoid because that’s often how J.R.R. Tolkien wrote dialogue anyway. There’s definitely a talented cast here. Orson Bean (They Might Be Giants fans probably understand why I always want to follow his name with Sky & Telescope) voiced Bilbo with a wry, understated humor. Oscar winner John Huston voiced Gandalf, Hans Conried was Thorin, and Paul Frees Bombur. One odd choice was Austria-Hungarian-born director Otto Preminger as a heavily accented Elvenking. The take on the Wood-Elves was very strange anyway, with their wrinkly greenish-gray skin and long, stick-thin legs. I thought Middle-Earth Elves were supposed to be ethereally beautiful.

Gollum was much more frog-like than Tolkien described him, although this was hardly the first time he was shown that way; I guess that’s where some people’s minds go with a flat-footed, large-eyed, croaking character who lives in a lake.

This, for instance, is how he looked in a 1971 German edition of the book:

And Smaug had bat-like features and headlight eyes, but there’s no reason dragons have to be entirely reptilian. 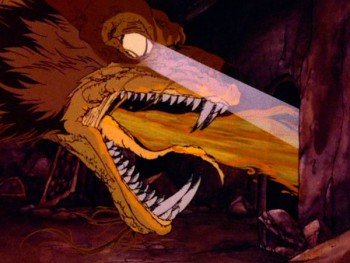 At an hour and seventeen minutes, it feels a bit rushed (for instance, the Dwarves show up right after Gandalf tries to recruit Bilbo, rather than later for a meal), but it manages to cover pretty much all the main plot points. Beorn isn’t there, but he didn’t really impact the story that much anyway. The most major change is the removal of Bilbo’s theft of the Arkenstone, which really pissed off Thorin, so instead the Dwarf is just mean to Bilbo because he disapproves of going to war. A few reviews I’ve seen mention that there was a pretty heavy anti-war theme that wasn’t so much present in the book, although I think it was already sort of there. One thing I didn’t like about the modern trilogy was how it threw in so many extra fight scenes where they really weren’t necessary. Yes, there were fight scenes in The Hobbit, but generally only when the characters had no other choice. The cartoon, being made for kids, went out of its way not to show any graphic violence. Characters do get stabbed with swords and die, but this is represented by a spinning freeze frame. Most of the songs in the movie (and there are a lot) are adapted from Tolkien’s own lyrics, often given a folk sound. I’d say it’s a more faithful adaptation of the book than the later film trilogy, which is saying something considering how short it is.

6 Responses to Food and Cheer Over Hoarded Gold