Beth had wanted me to write something about the Qatsi trilogy of films, which we watched a while ago, but I honestly couldn’t think of much to say about them. I guess I’ll address them somewhat, though, while also including hopefully more substantial thoughts on some other movies I’ve seen recently. The names of the three films, Koyaanisqatsi, Powaqqatsi, and Naqoyqatsi, are Hopi for, roughly, “Life Out of Balance,” “Life in Transformation,” and “Life as War.” Beth had put these on our Netflix queue some time ago out of interest in Philip Glass, who provided the soundtracks. I’ve heard it suggested that, like the Teletubbies, these films are best watched while high, and neither of us has ever gotten into recreational drug use. Each one is a collection of clips purporting to explore a certain theme. Koyaanisqatsi is about the destructive effect of humanity on the environment, Powaqqatsi about the industrialization of poor countries, and Naqoyqatsi about technology leading to violence as civilization. At least, that’s what they’re supposed to be about, and knowing that I can see how most of the clips used fit the themes. If I hadn’t know that ahead of time, though, I don’t think I would have gotten any of that out of them. Even as it is, they’re more just loosely related to the ideas than they really demonstrate any grand messages. The main thing I remember is the chanting of the first title.

While not really relevant to the trilogy, I’m giving a SPOILER WARNING for the next two films, even though they’re both pretty old.

The Day the Earth Stood Still – In this 1951 science fiction movie, a human-looking alien named Klaatu shows up on Earth in a flying saucer, and tells humanity that, if they continue killing each other, his robot Gort will destroy all of them. It’s kind of weird that he’s promoting peace by threatening even greater violence, but the general theme of human hostility is sadly apt. Klaatu is killed by the Army after a non-violent demonstration of his power, but Gort is able to revive him long enough for him to deliver a final ultimatum to Earth: either stop being violent and join interstellar society, or just stay on your own planet. He explains that, if anyone in his society tries to make war, their whole planet will be wiped out by robots. I think it’s pretty clear that this wouldn’t work for humans, many of whom tend to be a combination of utterly selfish and likely to do anything they’re warned not to. There are obvious parallels to the story of Jesus, but I don’t know whether they’re intentional. I mean, E.T. can be compared to Christ, but it was created by a Jewish guy who wasn’t thinking along those lines at all. In the metaphor, I suppose that, in this metaphor, Gort would be the vengeful aspect of God. Jesus preached peace, but also a coming apocalypse. This movie also introduces the legendary phrse “Klaatu barada nikto,” which is never explicitly translated, but apparently lets Gort know that Klaatu has died, but he still shouldn’t kill all humans. They’re the magic words Bruce Campbell keeps getting wrong in Army of Darkness; and Klaatu and Barada are minor characters who work in Jabba’s palace in Return of the Jedi, with Nikto being the name of Klaatu’s species. 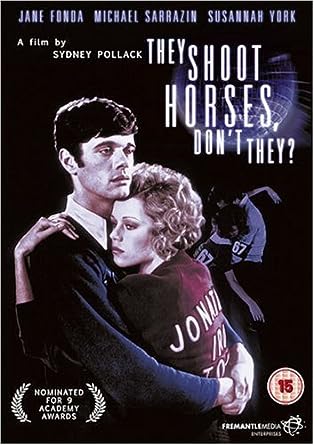 They Shoot Horses, Don’t They? – Beth has a desire to watch really disturbing movies, and this one has come up on many lists of such. I knew it was about a dance marathon, but I wasn’t entirely sure how that would be so disturbing (more like just plain exhausting) or how the title relates. It all makes sense in the end, though. Set during the Depression, it largely focuses on the characters Robert and Gloria, but there are other participants whose stories are addressed as well. It’s gradually revealed that the guy running the marathon is really crooked, destroying contestants’ things to create drama, not telling anybody when someone dies on the dance floor and another goes crazy witnessing it, and planning to weasel out of actually providing the prize money to the winners. So, yeah, it’s pretty messed up. And if you don’t mind me spoiling the ending, the title comes into play because Robert compares his eventual killing of Gloria at her request to his father killing a horse in his childhood, which was shown at the beginning of the film. So, yeah, it’s pretty messed up, and based largely on things that actually happened at Depression-era dance marathons (although not necessarily all at the same one). A major goal of the promoters was to allow audiences to see people suffer even worse than they were. What’s weird is that the movie led to a revival of such marathons, even though it was about how horrible they were. The more recent ones, however, were often done for charity and didn’t last anywhere near as long.