Ding Dong, the Demon Is Dead

Hey, I finally beat Rhapthorne in Dragon Quest VIII! I leveled up a little more, but I think a lot of it was luck. After you kill the Dark Lord (SPOILERS, obviously), there’s an ending sequence where Empyrea takes you back to Trodain Castle, reveals that her real name is Ramia (the phoenix from DQ3), and departs for another world. The curse on King Trode and Princess Medea is broken, and Trode looks pretty much the same except not green. The party splits up, and a few months later, Medea’s arranged marriage to Prince Charmles of Argonia is set to take place.

The Prince is an all-around unpleasant character, rude, condescending, cowardly, and childish, with an Elmer Fudd speech impediment. Pretty much everyone calls him “Charmless,” and he insists it’s pronounced “Charm-LAY,” but it’s really just Charles with an M. The initiation for Princes of Argonia is to kill an Argon Lizard and bring back its heart, but Charmles is so terrified of this that the party has to do it for him, then he just goes and buys a bigger Argon heart anyway. He’s also abusive to Medea in horse form (without knowing who she is, but still, dick move). In the ending, Medea tires of Charmles’ pushiness and runs away from her wedding, assisted by the hero and her father. Then the credits roll for a long time, and that’s it for the main game. As is typical for reissued role-playing games, however, there’s some post-game content that includes even harder bosses. Although I did save after the credits, I don’t think I’m going to try this right away. I remember attempting the post-game in the Game Boy Advance version of Final Fantasy II (the original II, not the one that used to be IV in the States), and dying pretty much immediately. From what I’ve heard, though, it’s the post-game that really goes into the hero’s origins; the main game just says he was a lost boy who showed up in Trodain, grew up with the Princess, and became a guard. DQ heroes are often lost royalty or of supernatural descent, and I believe it’s eventually revealed that both are true for this guy, and that his pet mouse has a secret identity as well. He can also marry either Medea or Jessica, although the latter requires you to do something before beating Rhapthorne that I didn’t do. I don’t think there was any real chemistry between the hero and Jessica anyway, but I guess it’s a fanservice thing. And Lorenzo, son of the Chancellor of Argonia, who at least claimed to be engaged to Jessica, doesn’t seem interested in her anymore for some reason. There are hints that she and Angelo have feelings for each other, but getting him to settle down would be a real challenge.

I’ve already given my general thoughts on the game, but I figured I should address some of its additional aspects. One is the alchemy pot, which combines two of more items into something new.

From what I’ve heard, this was more of a pain in the PlayStation version, as it took a while to work. In the 3DS version, it’s instant from when you first get it, although it takes some time before King Trode can successfully upgrade it to combine three items instead of just two. Recipes are in books scattered throughout the world, or you can experiment on your own; the game will let you know whether it’s possible to use certain items together, although it won’t tell you what the result will be unless you’ve either done it before or found a recipe. You can get some rare items that way. What’s kind of annoying is that it often means you can’t sell your excess stuff, because you might be able to use it for alchemy when you’ve found other required items. At least, that’s how it worked out for me. 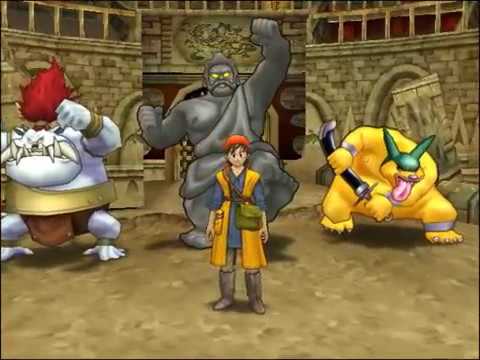 Another significant but optional part of the game is the Monster Arena. Monster fights as a sport have been a part of the series since DQ3, and you were able to recruit monsters to fight alongside your party in 5 and 6, with the Monsters games based pretty much entirely around this mechanic. In 8, the owner of the arena, the rich, eccentric Italian (or whatever the equivalent of Italian is in this world; I don’t think you ever find out his origins) Morrie Mozzarella, sees promise in you and tasks you with finding certain monsters throughout the world to build your own team. 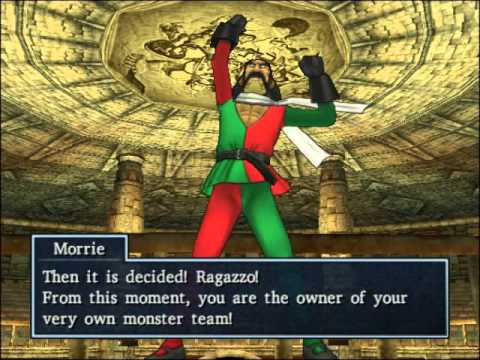 You can only recruit certain monsters, which are stronger than others of their kind and indicated with a special cursor when you see them on the map screen. 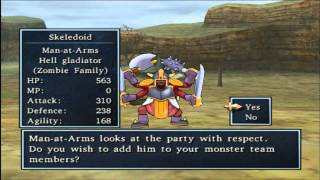 You then can enter them in matches in order to increase your rank, which also comes with additional prizes from Morrie. The battles are automatic; you can’t tell the monsters what to do, and they’re not always that smart. Fortunately, this is the case for your opponents as well. Once you reach a certain rank, you can also call your monster team to help you in battle. Since Morrie revives and heals the monsters after every challenge, it is perhaps a little less barbaric than it seems at first. In the 3DS version, if you become the champion, Morrie will join you as a permanent party member, but I never got that far.

Something new to the 3DS version is the ability to take pictures of what’s on the screen, even giving you a certain amount of control over what the results will look like. You can choose whether or not your party is in the picture, which raises the question of who’s holding the camera, since it’s explicitly mentioned in-game and not just a player mechanic. Maybe it can float or something. There’s never any indication that you have to develop the film either, so I’m guessing it’s magical. In the town of Port Prospect, there’s a guy named Cameron Obscura who will reward you if you take pictures of certain things, with the list growing as you visit new places.

How Cameron finds out about these things is never stated, although the descriptions suggest he’s visited some of them himself. The instructions are a little vague sometimes, like when it doesn’t specify WHICH casino sign in Baccarat you’re supposed to photograph. And you can’t take pictures in battle, so if the challenge specifies a monster doing something, like a cat washing its face or a Khalamari Kid doodling, you have to catch them doing that on the map screen.

So that’s DQ8, at least until I pluck up the courage to try the post-game. I had kind of wanted to get back to DQ5 after this, but I don’t have it on hand, so maybe 6 instead. I’ve actually gotten pretty far in that one, but I can’t remember much of it. 5 was a lot more memorable, even though I think I last played that even longer ago. I’ve also been playing Kirby Triple Deluxe, and was going to write about that today, but defeating Rhapthorne made this seem more urgent. By the way, is he called Rhapthorne because one of his powers is wrapping thorns around people, particularly when he’s still trapped in the scepter? I understand his Japanese name is Rapuson, and I don’t know if that means anything.